Edd China’s Workshop Diaries: Why The Hell Is Edd Putting A Diesel Engine In His Electric Ice Cream Truck? 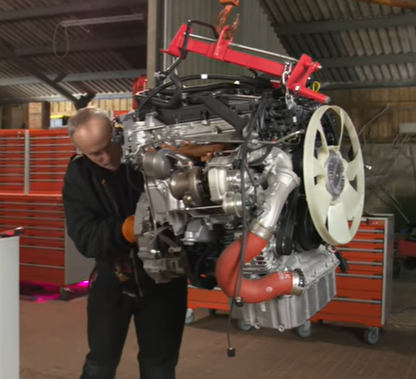 Well… that didn’t take long. Apparently someone else wants the Mercedes Sprinter Van ice cream truck, but without the electric motor and drivetrain. We’re not exactly sure why, but we know Edd will explain it to us in this latest video. And he’s got a helper! Read the video description below and then watch.

Look who’s talking!…Yes he does actually speak, after all this time in near total silence on Wheeler Dealers, the man who was always around to give me a hand does it again, to help with the de-converting of my record breaking electric ice cream van. The final part of the diesel Sprinter based electric ice cream van project is putting it back to diesel so I can hand it back to the van body converters as they want it! It is a real shame after all this time and effort but the world’s first ever all-electric ice cream van must be de-commisioned. Thankfully the legacy of the electric conversion kit for the ice cream machine will live on but if I want another pop at the Guinness World Record then I’ll have to build another electric ice cream van… …now there’s an idea! Edd China’s Workshop Diaries 29: World’s Fastest Electric Ice Cream Van Part 10 (How to put a diesel engine back into a Mercedes Sprinter van).