Friday Excuse to Go Home Early and Drink: Is There a Reason NOT To?

May 01, 2009Brian LohnesBangShift NewsComments Off on Friday Excuse to Go Home Early and Drink: Is There a Reason NOT To? 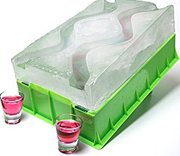 This “Friday Excuse to Go Home Early and Drink” was the one weekly blog item we dreamed up and we thought that it may be a bit of a stretch to make it work. Luckily for us, the automotive world is trying to auger itself into the ground, providing this space with enough fodder to last half a lifetime.

We say that in a macabre, gallows humor kind of way because we know that the implications of this week’s salvo of horrible news is bad for many people who make a living tied to General Motors and the domestic car industry. The big face of the Pontiac shuttering is of course, Pontiac, but the people working for the suppliers, and even the folks toiling away in Australia building the cars that the brand imports are sure to get hit by the wave of badness that is beginning to swell offshore.

Then there’s the news that the General is going to lose half of its dealers over the next few years, which we can only imagine correlates to a reduction in production over that period as well.

We understand that these are business decisions and they are being made to save the majority of the company while jettisoning the rest, but it doesn’t make it any less sobering.

Daimler decided to ditch the remaining stake it had in Chrysler, a farewell that we greeted by farting in the general direction of Germany. Not all Germans of course, just the geniuses that bled the creativity, money, profitability, viability, and sprit from Chrysler. We hope they got a whiff because we had cabbage with dinner last night.

We could go on and on with these stories, but the fact is, our ice luge is melting and that bottle of Cabo Wabo isn’t going to drink itself.