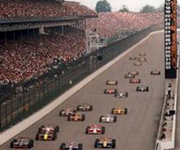 For the majority of the year it sits silent, a massive monument to man’s quest for speed. The month of May brings it to life, and on Memorial Day every year, a couple hundred thousand people pack its grounds to witness the most famous motor race in the world, the Indy 500 held at the equally magnificent Indianapolis Motor Speedway.

For decades the Indy 500 represented the absolute bleeding edge of engineering, innovation, and creativity in the endeavor of motor racing. Like all things, the machinery involved in the race has changed, but the monstrous 2.5-mile, semi-rectangular course has remained the same since the track was constructed in 1909 for the immense cost of $3 million. Its original brick surface was all gone by 1961 when final paving had the whole course covered in pavement.

With flat straights and 9-degree banking in the turns, by modern standards it’s virtually a flat track and presents a host of very unique challenges for teams and crews setting up their race cars.

It has seen moments of incredible triumph like Gordon Johncock’s 1982 victory over Rick Mears by a scant 0.16 of a second. It has also seen far more than its fair share of tragedy like the death of Bill Vukovitch while leading the 1955 500.

The track has a museum and offers tours. Now may not be the ideal time of the year to visit Indy, but every gearhead needs to have the Indy 500 or an “off season” visit to IMS on their bucket list.