Automotive designers have the unique ability to create something that has the potential to last for a very long time. Guys like Bill Mitchell, Harley Earl, Larry Shinoda were able to capture the public’s imagination with their sexy, timeless ideas.

Virgil Exner does not enjoy that same type of seemingly universal acclaim despite the fact that his accomplishments and ideas helped shape the visual landscape of automotive design in the ‘50s. Instead, Exner is best remembered for a last batch of cars he designed for Chrysler that not only looked odd when released, they’ve not moved any closer to normal after nearly 50 years since hitting the street.

Before we get into that mess, it’s important to look at the entire career of a guy who was really an American success story. Born in Ann Arbor, Michigan, in 1909, Exner was a bright kid who throughout his childhood had a well-known fascination with art and cars. He attended Notre Dame for two years before the monetary well ran dry and he returned home to Michigan where he took a job working as a helper at an art studio.

Showing aptitude as an artist, it wasn’t long before Exner was drawing the illustrations for Studebaker truck advertisements. As his profile raised, Harley Earl hired him to work at GM and while there he had a meteoric rise to become the head of styling for Pontiac before his 30th birthday.

He was plucked from GM by the influential designer Raymond Loewy to work at his firm, Loewy and Associates. Loewy’s firm worked on everything from industrial equipment to cars and Loewy took Exner to be his protégé, it seemed to be a match made in heaven, but ended acrimoniously when Loewy was getting credit for design work that Exner had clearly been the lead guy on.

Because Loewy’s firm had the contract with Studebaker, Exner worked hard on the designs for the 1939 and 1940 models. He was also working on advanced designs for the company’s postwar offerings. This is when the rift developed with Loewy. Exner felt that his work was being purposely ignored by Loewy who had veto power over every design decision to come out of his firm. Studebaker was getting tired of Loewy’s antics too and amazingly Stude’s head of engineering, Roy Cole told Exner to work on his own, drawing designs he could hold onto in the event that Stude separated themselves from the firm.

In 1944, things came to a head with Loewy and Exner was fired. It was not a long retirement though as his services were quickly scooped up by Studebaker. He was their employee now. His crowning achievement while at Studebaker was also his undoing with the company as he designed the 1947 Starlight Coupe, a stunning piece for the day. Studebaker, knowing that Raymond Loewy’s name had lots of sway with the public, advertised the car as being designed by him. Exner was furious and left the company.

He would end up at Chrysler, the place that would come to define him more than any other. Exner was given a lot of control at Chrysler and got the company hooked up with Italian manufacturer Ghia to help aid in design projects. As the head of the Advanced Styling Group, it was his job to set the trends for the future of the brand.

Those ideas took Chryslers from being toaster ovens on wheels to their becoming the design leader through the mid and late ‘50s. Although GM introduced fins on the Cadillac, it can be argued that Exner made the best use out of them as a design aesthetic.

1956 would be a very bad year for Exner. During the design process for the 1961 models (done in 1956) Exner suffered a heart attack and missed an extended period of work. That lost time resulted in the 1961 design year being marked as a “transition” year for the look. This decision meant that 1961 models would have subtle changes from the 1960 models, but would only be service as a place marker for the radically redesigned 1962s.

Those radical look 1962 cars exist in a world of their own, and it is generally not viewed as a pretty one. The ironic part is that its little fault of Exners. As the story goes, Chrysler got a “hot tip” that GM was going to downsize their entire product line for the 1962 season. At the point of no return in 1959, Chrysler made the decision to do the same. They ordered major size changes to the cars, rumored to have been three inches shorter on wheelbase and a whopping eight inches narrower, across the board. Exner pleaded with executives at the company to rethink this decision because the cars would look bad, but they were convinced that customers would flock away from their bigger offerings.

As it were, the “hot tip” was junk and neither GM or Ford made any such changes. The damage was done, as the 1962 model year was a sales disaster for Chrysler and all the corporate fingers began to point to Exner. He was fired from the company, and sadly lives in an undeserved sort of infamy amongst enthusiasts.

After Chrysler, Exner opened his own design studio and worked on a variety of projects including designing boats. He also tried to revive the Dusenberg brand using Chrysler underpinnings, which was a failure of some magnitude. His last triumph, if we can call it that was having a large part in reviving the Stutz brand in the ‘70s.

Virgil Exner is a gearhead guy you should know because his influence went far beyond one odd year of Chryslers. The next time you hear someone bagging on those cars, remind them that he was the head of design for Pontiac, designed several acclaimed Studebakers, and had the most forward looking, hottest selling new car designs of the late 1950s. 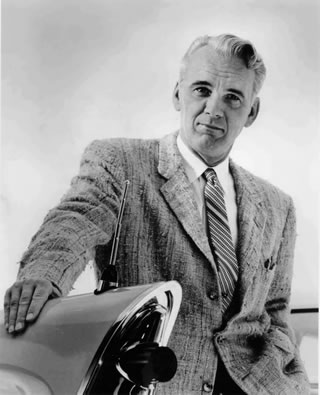 Bitchin' Video: A Profile of the Bad Ass 1964 Mack B-61 From the Holley NHRA National Hot Rod Reunion! Question of the Day: Are You A Well Rounded Gearhead or Do You Have Automotive Tunnel Vision?

3 thoughts on “Gearhead Guys You Should Know: Virgil Exner”