Out Of This World: This 1973 Trans Am Is A Completely Bonkers Take On A 70’s Street Machine! 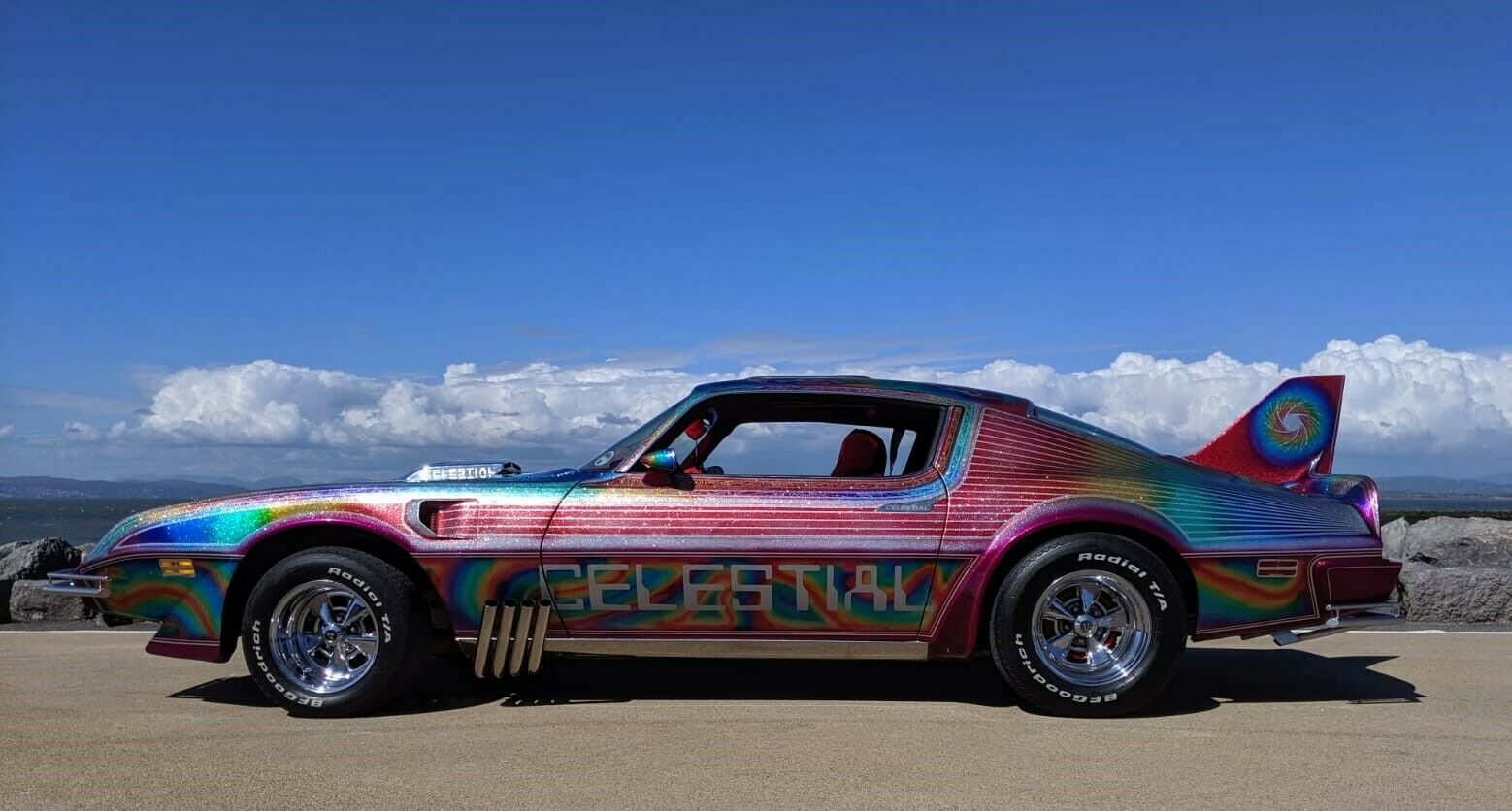 If there’s a car that’s been especially hot in the resellers market in the past few years, it’s the 1970-81 Pontiac Firebird Trans Am. Early cars, especially the 1970-73 Trans Ams, are fetching record prices at auctions. Even the once-derided Disco-Era cars are selling for headline-grabbing amounts that will make anyone who owned one of these things back in the day’s eyes bulge out of their head. As an owner of a 1979 Trans Am, I try to keep my finger on the pulse of the market, just for curiosity’s sake. Every once in a while, a car will come up for sale that will make my jaw drop. This is one of them, and I’m not sure my jaw is dropping for all the right reasons, but here we are.

This… err… was a 1973 Trans Am, which is the last year of the classic 1970-73 body style, and was arguably the best looking of the 2nd Gen Firebird line. Someone back in the zany, wacky 1970’s thought it would be a really cool platform to build a space ship from, and, well… let’s let the pictures do the talking! 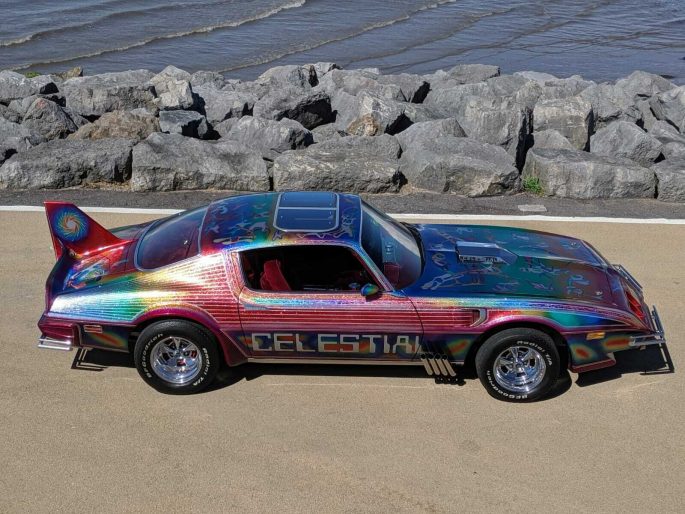 There’s not much out there that’s more 70’s than this right here. Insane metal flake paint, side pipes, a split pop-up sunroof, Cragar SS’s, weird chrome tube bumpers, and a fin aped from Craig Breedlove’s Spirit of America make for an intense visual package. Man, there is A LOT going on here. 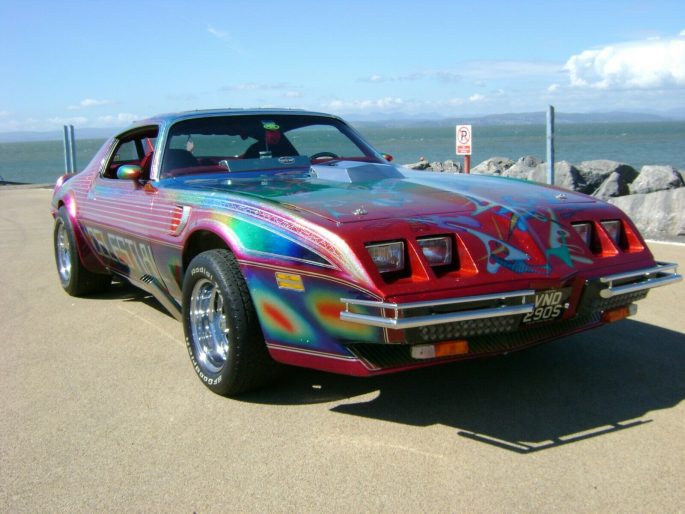 As an aficionado of all things Trans Am, it’s funny to see someone purposely swap on later 1979-81 bits on an older car, as it’s usually the other way around! Small details, like filled seams between the nose and fenders and the later-style shaker scoop are interesting touches for an early car, but not out of the ordinary for someone modding a street machine in the late 70’s. Back then, the newer bits like rectangular headlights were the new hotness, and everyone wanted them! Also note the amber turn signals attached below the bumper; this weird bird lives overseas in the UK! 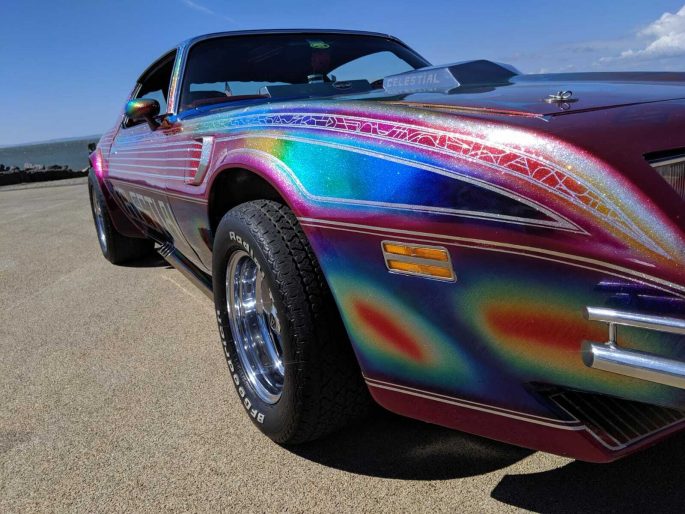 As odd as this car is, the paint itself is nothing short of spectacular. Also note the tread on those Radial T/A’s; those are real early ones! 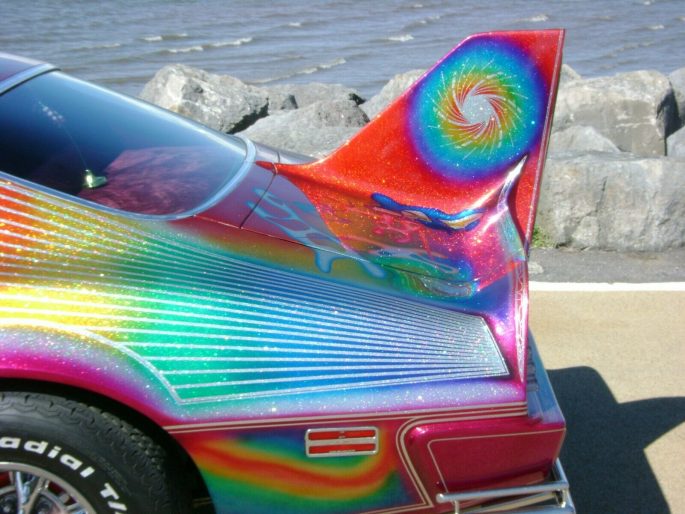 And you thought the biplane Erector Set wing on your neighbor’s Civic was nuts. This fin which sprouts up in the middle of the car’s trunk actually starts on the filler panel and extends into the center of the tail panel, and yet somehow incorporates a 1979-81 spoiler on either side. Wowzers. 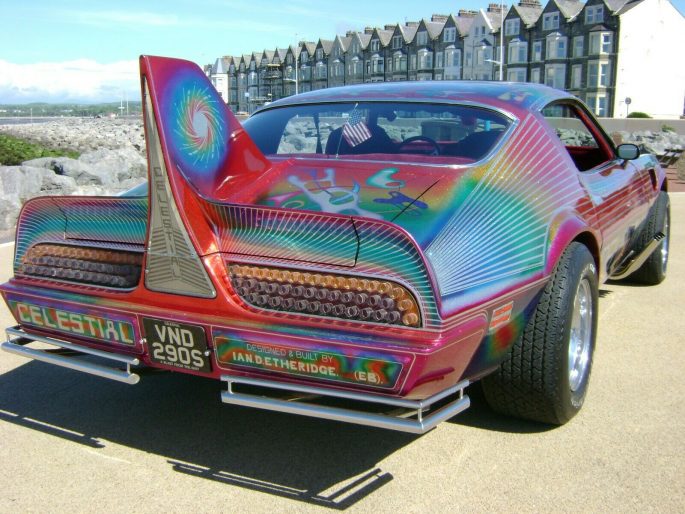 A note about the builder: as displayed proudly on the bumper, a guy named Ian D. Etheridge built this creation. From what we can tell, Ian was a skilled British customizer active in the late 70’s and early 80’s, and created this thing as well as a Ford Capri called Venom that’s also heavily customized. He even made it into a few custom car magazines back in the day with his creations. I would imagine a regular 1973 Firebird being rare enough in Great Britain back then, so modding this one to insanity was certainly a bold move. 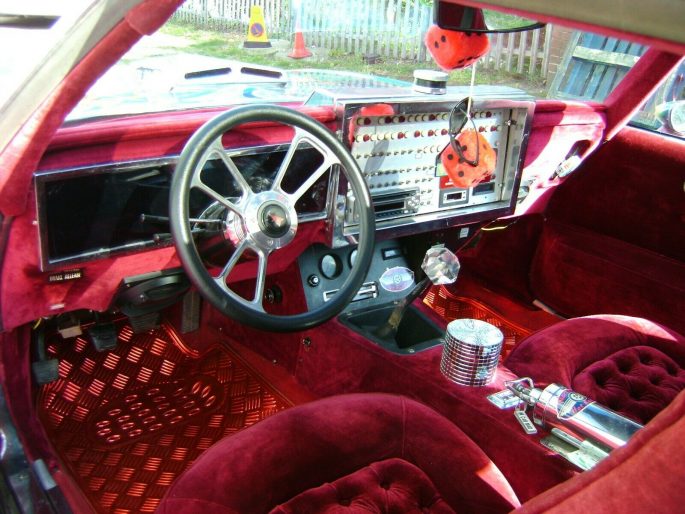 Stepping inside, things are just as crazy as the exterior. While the steering wheel appears to be a recent addition, the button tuck Parisian Brothel Red Velour seats and the whacko dash with what appears to be a whole slate of digital gauges and a center section seemingly lifted from a console from James T Kirk’s Enterprise assumingly date to the original build. Note that this car has three pedals and a Hurst shifter with a giant cubic zirconia festooned to the top; yup, this was a 455/4-speed car when it rolled off the assembly line. 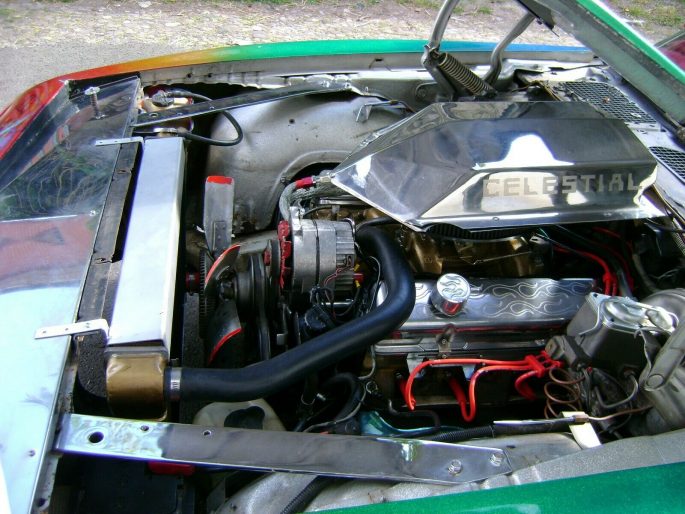 And speaking of that 455, Pontiac purists will be happy to note that while there are extreme modifications to just about everything else, the original engine is intact. It’s wearing some aftermarket bits here and there, but it’s mundane compared to the rest of the car. Also of note: that shaker seems to be hand-made, and styled after the angular 1977-81 shakers. And it’s not bolted to the hood! 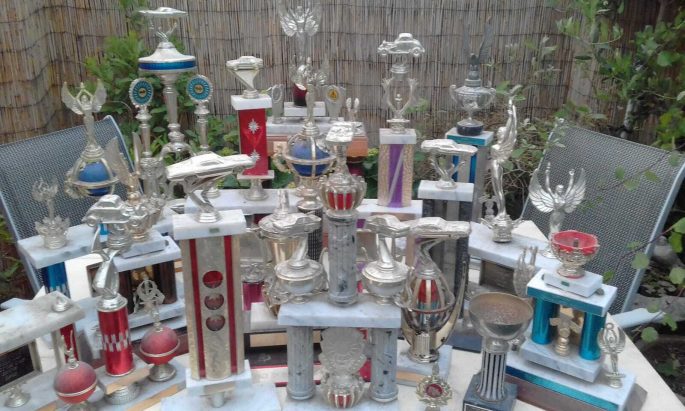 This car has reportedly won over 300 trophies on the show circuit in Great Britain over the years. It comes with most of them.

This space bird is currently up for sale on Ebay in the UK as a straight-up classified ad with a price of £26,500.00, which translates to roughly $33,712.63 at the time of this writing. That’s strong money for a late 70’s custom, but where else are you going to find a space cruiser that would make Spock raise an eyebrow for the price of a loaded Camry? Another thing to consider: 40+ year old custom show cars typically don’t make it this long without falling into extreme disrepair, so seeing one in this condition is like a time capsule to a forgotten era. As strange as it is, it’s still cool to see something like this street freak still existing in today’s world. If you are truly nuts, live in the UK, and have a hole burning in the pocket of your space pants, you can buy the Celestial right now in the link below:
https://www.ebay.co.uk/itm/PONTIAC-FIREBIRD-TRANS-AM-1973-455CI-MANUAL-HOTROD/163749495011

Here’s an excerpt from the ad:

The car was owned and built in the late 70’s by the talented Ian Etheridge of Stockport. Besides all the customising, it took over 2,500 hours to complete the paintwork alone! It is a complete work of art, it shows the testament of the workmanship as it looks as though it was painted yesterday and not nearly 40 years ago.

The car really has to be seen to be appreciated as no pictures can do this car justice. On a sunny day the metal flake is so sparkly it almost makes your eyes hurt!

In its day the car was so advanced of the time and it won almost every show entered. It has won over 300 best in show trophies. (there are lots of trophies to go with the car)

The car featured on the front cover of Street Machine in 1980, included is a copy to go with the car.

The car was then tracked down by the owner of Holker Hall (Lakeland) Car Museum where it was the star attraction of the museum for almost 20 years.

I bought the car directly from the museum and have owned it for aprox 10 years.   My first job was to do an extensive re-commissioning job, most of which was carried out professionally by Drag Racing Guru Dave Billadeau.

The work that has been carried out over my ownership is as follows:

All fluids, oils and filters changed,

Plus other things I am sure that I have not mentioned.

The car drives really well and is very fast and also drives equally well around town. The exhaust sounds awesome and has that proper V8 rumble.

The car is fitted with power steering and brakes, electric windows a 4 speed manual gearbox and has more lights and switches than you can shake a stick at.

The interior is equally as impressive as the outside with deep buttoned plush red velour seats, doors and headlining.

It has never had any rust issues with spending most of its life inside and has never seen any rain for around 30 years! As mentioned previously, the bodywork and paintwork are stunning.

Miles per Gallon – Not many to be honest.

The car gets Lots of attention wherever it goes and you can’t go anywhere without people stopping to talk or take photographs.

It would be a good business Promotional Vehicle.

Bad Points (not many)

The Heater does not work (its been disconnected at some point)

There is a small paint chip on the front wing that has been touched up. It’s where one of the trophies fell over and chipped the paint work in the museum!

None of the above have bothered me – just trying to be honest in the description.

This is truly a one of a kind car and unfortunately due to my circumstances I haven’t used it as much as I would have liked. It is a very, very reluctant sale.

If there is any more information needed – please ask.

Genuine sales enquiries only, please do not waste my time with silly offers, deals or swaps.

The car is located in Morecambe, Lancashire. LA4

This Video For the 1992 Typhoon and The 1992 Syclone That Never Was Is A Cool Time Capsule From The Early 1990s Watching This Cummins-Powered Ram Folding In The Middle During A Tug-Of-War Is Only The Beginning Of This Video!