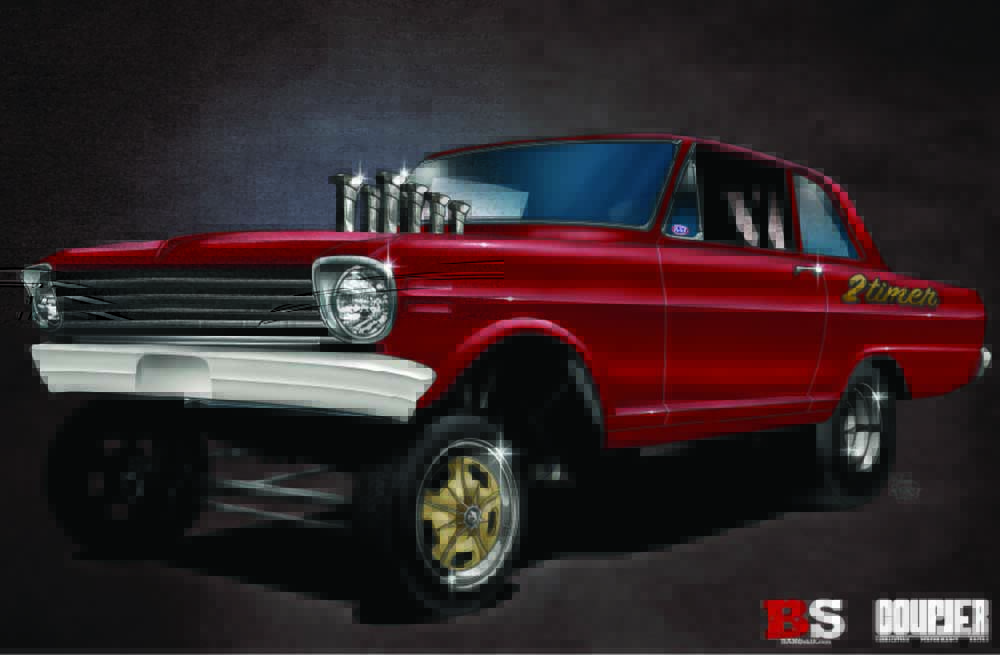 (Words by Darr Hawthorne – Photos by Zak Hawthorne, Nick Licata & Darr Hawthorne) With recycling in so many parts of our lives, it surely extends into classic cars and repurposing hot rods and racecars. Hence a new project; The 2 Timer Chevy II.

Like a lot of gearheads, we’ve had one of those “just cannot sell it” cars that’s been sitting around the shop – engineless with flat tires.  It’s a ’64 Chevy II that was street/strip driven by Zak Hawthorne back in 2004-5 during the days when Goodguys ran a robust Vintage Drag Racing Series, built with a chrome straight axle and a single 4-barrel, 468-inch big block Chevrolet. 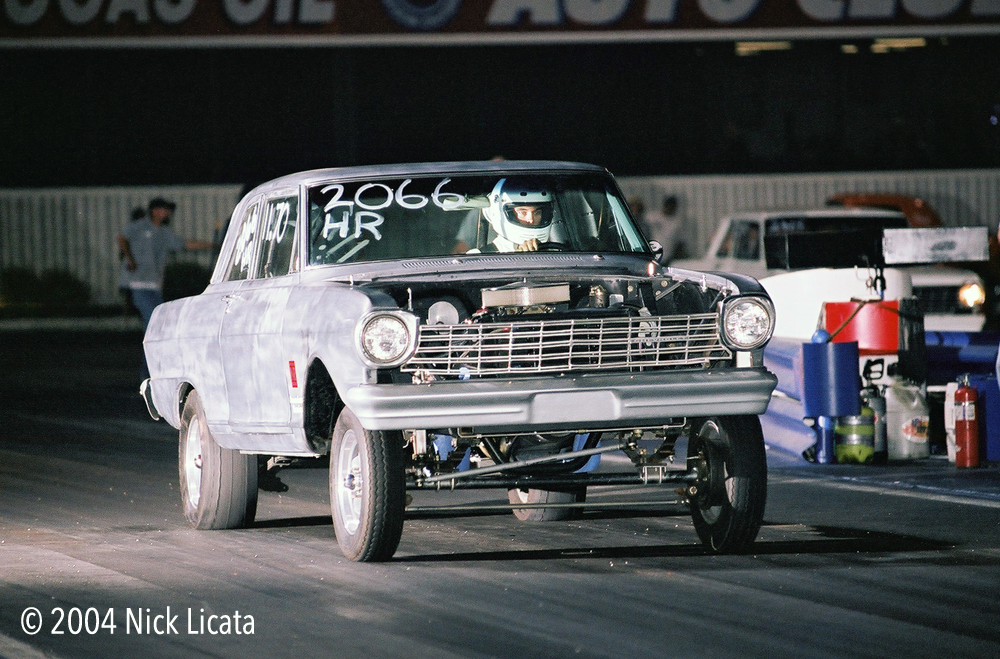 As I remember, it ran a best quarter mile of 11.70’s at 117 mph with a stock 307, non-posi, open rear end doing peg-legged burnouts. We had a lot of fun racing this low maintenance car and still driving it to car shows and to Bob’s Big Boy cruise nights.

The rattle-can paint was enough for a car that was basically built outdoors on a concrete slab, with metal folding chairs for a chassis jig, just outside the San Fernando Valley set of Junkyard Wars, the old Discovery TV Series and was used in the opening sequence of an episode shot locally at Irwindale Dragstrip. 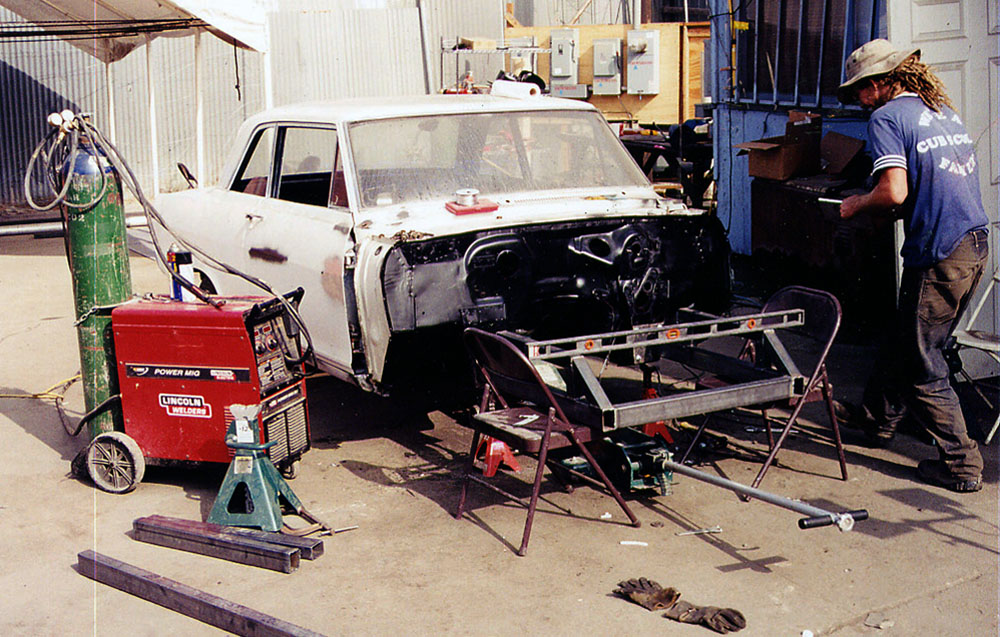 Originally, the virtually “rust-free” Chevy II, it was found in the weeds on a Central California farm without a large section of the floor, used by the farmer’s dog as a hideout. Back when son Zak was in high school, we’d found and purchased a similar straight-six powered, white Nova sitting in front of a craftsman house in La Verne near Pomona Raceway, occasionally he bracket raced it, slowly.

The catalyst for reincarnation of the Chevy II was spending a day racing Zak’s 1930 Model A at the Antique Nationals, held at Auto Club Dragway at Fontana this year, we’ll post a feature on the build of the Total Cost Involved chassied 5-window here soon. While the Model A was built as a cruiser hot rod, racing it stoked a dormant fire to build a dedicated altered wheelbase drag racer utilizing many parts already in the shop, looking at Doug Thorley’s “Chevy II Much” racecar of the mid-60’s as a guide. 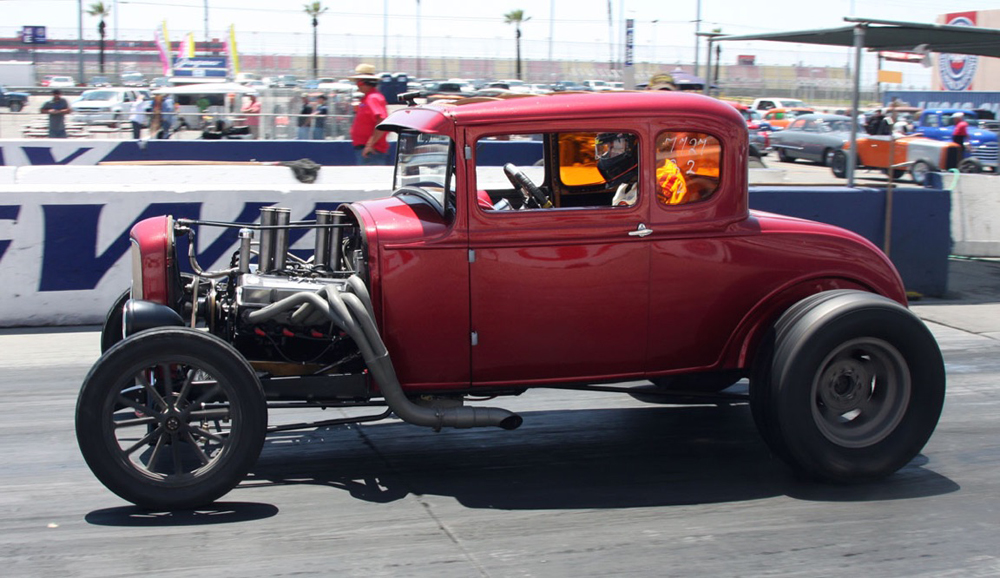 Upon returning from the Antique Nationals, Zak started the build, gutting the body shell with plans to weld together a simple dual rail chassis with the rear wheels moved about 14 inches forward and the fronts about 9 inches. In a classic look, coil over shocks and ladder bars will stick a Strange Engineering-built Dana 60 that’d been sitting on a lower shelf at the shop for years, patiently waiting for this project to begin.  While we’d previously accumulated a fiberglass hood, trunk lid and bumpers, it was a lucky, bargain Craigslist find of a never-mounted tilt front end that solidified the Chevy II’s direction. 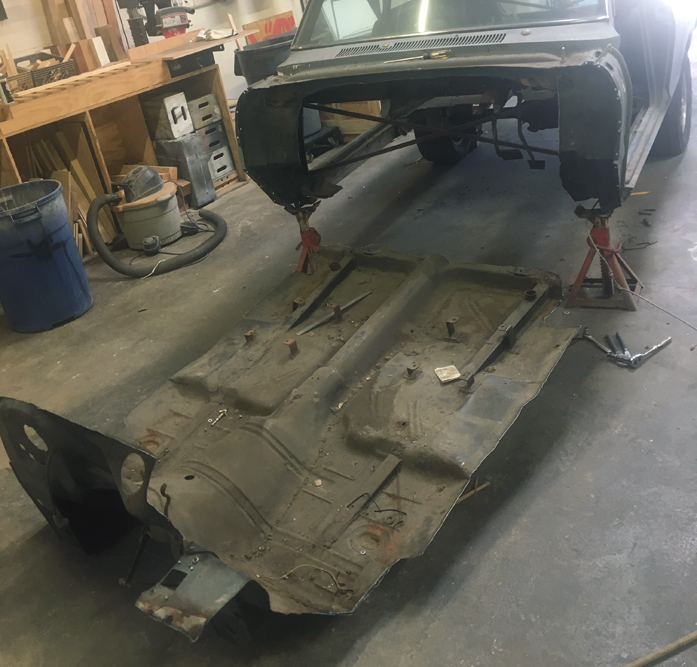 After getting the shell back from sandblasting, a minor rear end collision was uncovered and some very small, but easily fixable rust along the roof drip rails and a rear quarter panel.  Since the goal was to dramatically alter the wheelbase placement, we found reasonably priced, offshore Taiwan, stamped body skins locally available in Southern California. 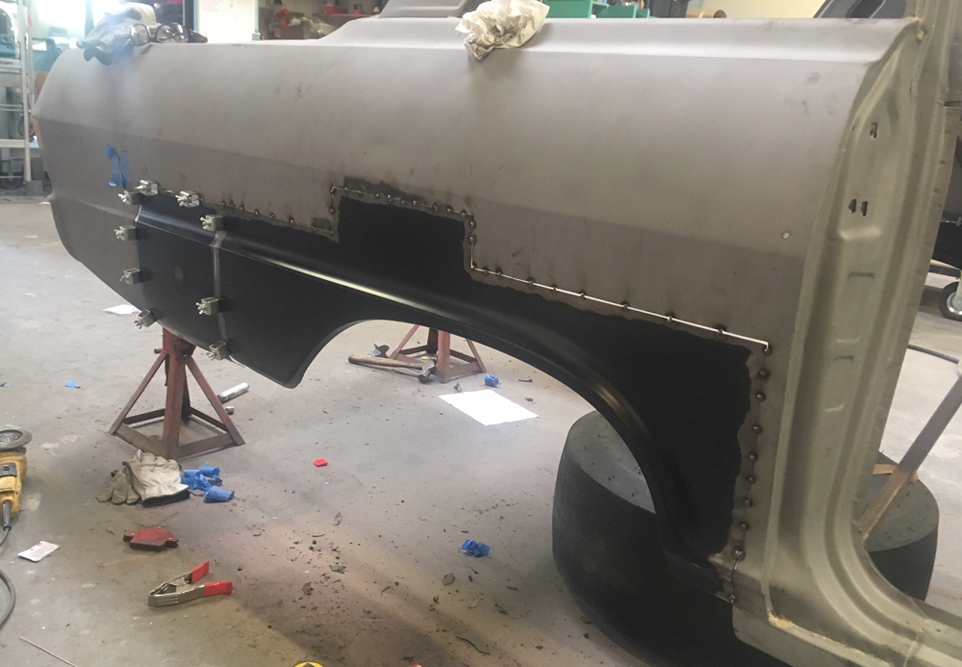 Since the plans are to race this car in the NHRA Heritage Series as quickly as a 9.60 index, we contacted Chris Alston’s Chassisworks for some guidance where we were directed to download Alston’s Custom Roll Cage Product Worksheet.  This is an awesome, detailed sheet that’ll keep track of every part of the chassis build.

Chris Alston’s Chassisworks offers a very inexpensive way to modify the width of some parts of the 14-point roll cage for a racecar without a factory interior and add a helmet bar for NHRA Tech certification down to an 8.50-second elapsed time. 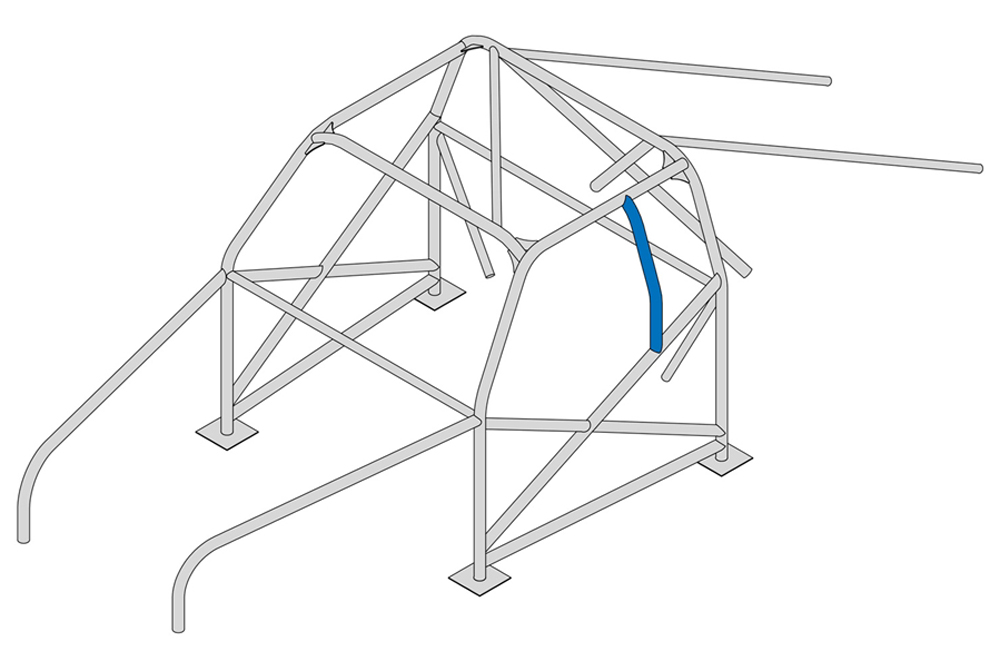 We’ll also be utilizing an Alston Rear Coil-Over VariShock Package (VAS 910) with a Ladder Bar Crossmember and since there’s going to be a drastic wheelbase change, a pair of Alston’s 52-inch wheelie bars (6233) will help keep the Chevy II grounded.

Mike Judson from Mickey Thompson Tires saved us a set of 10.5 take-off drag slicks that’ll help in building and mocking up the chassis and new wheel wells. On the front it’ll be a set of vintage spindle mounted magnesium Halibrand “Sunbursts” found at a local swap meet, like the kind Doug Thorley ran in the sixties. Safety equipment will come from DJ Safety. 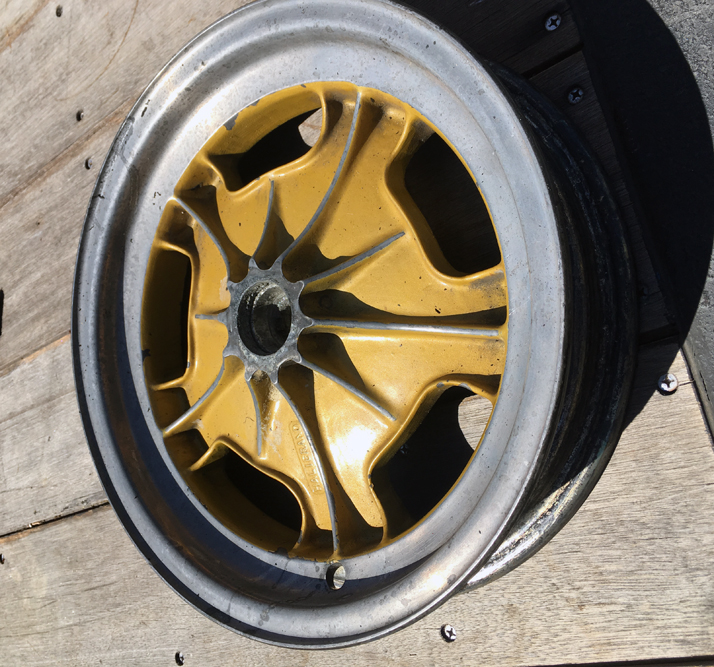 A couple of years ago an old friend and fishing buddy called with the proclamation that he was finished building hot rods and decided to spend retirement peacefully on his Bass Boat, daily. The call was an offer for me to take some Chevy small block parts out of his garage, for free! I picked up a sweet mid-80’s 327 GM O-ringed short block and heads, pumps, starter, valve covers and most of what is needed to build a mild street engine. 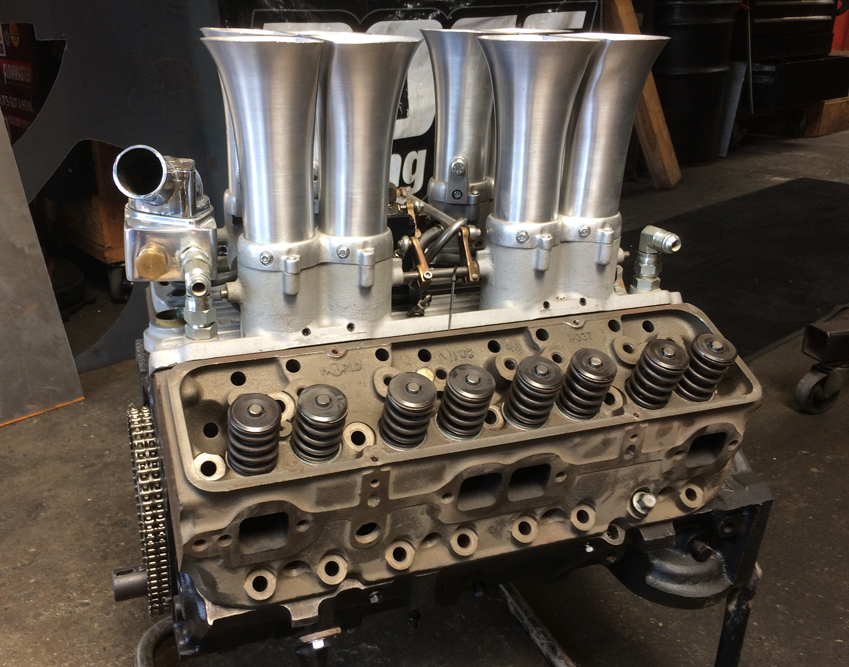 A friend, nitro funny car driver and former 7.0 Pro champion Bobby Cottrell has agreed to build the new engine.  He’s built and raced small and big block powered dragsters out of his BC Performance shop in Whittier, with that experience giving Bobby some perspective with a couple of ideas that’ll get us the horsepower to propel the lightweight car down the quarter mile.

The small block will carry a Lunati 383 cubic inch stroker kit and rotating assembly along with a specially ground Lunati cam and valve train with pistons from JE Pistons and their Pro Seal rings. Sitting on top will be a set of Air Flow Research aluminum competition heads setting a near 14:1 compression ratio with a set of Mark Adelizzi’s Flatout Gaskets throughout.

We’ll machine and retrofit a set of Milodon 4-bolt main caps, using a Moroso recessed stroker oil pan and high capacity oil pump. Of course with the clamping force of ARP Bolts, this engine could make as much as a predicted 750 horsepower.  We are still undecided about the exhaust headers we’ll utilize. 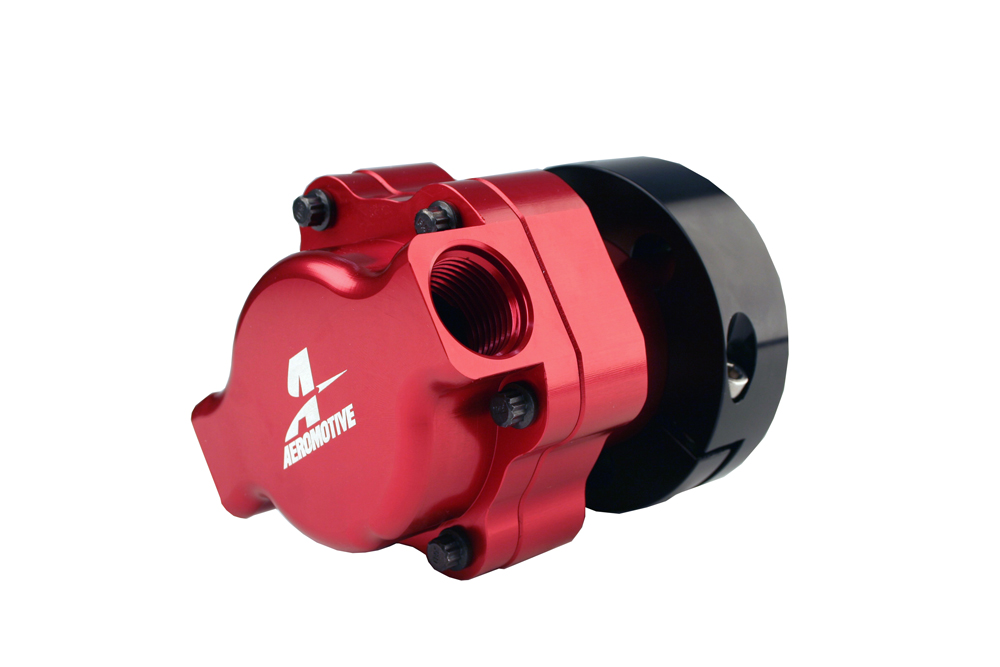 As mentioned, we’ve been gathering parts and pieces for a bunch of years including a primo set of used Enderle injectors, shutoff, fuel lines and throttle linkage for a bargain price on Racing Junk. We’ll add a Milodon front cover and gear drive to move methanol through an Aeromotive Six Series billet Gerotor front mounted hex drive fuel pump #11107, fed by an Aeromotive 6.5 gallon fuel cell.

The trans is being built by SoCal transmission genius Mike Stewart at Mike’s Transmissions, he’ll be beefing up an all out GM Powerglide and converter for the project. 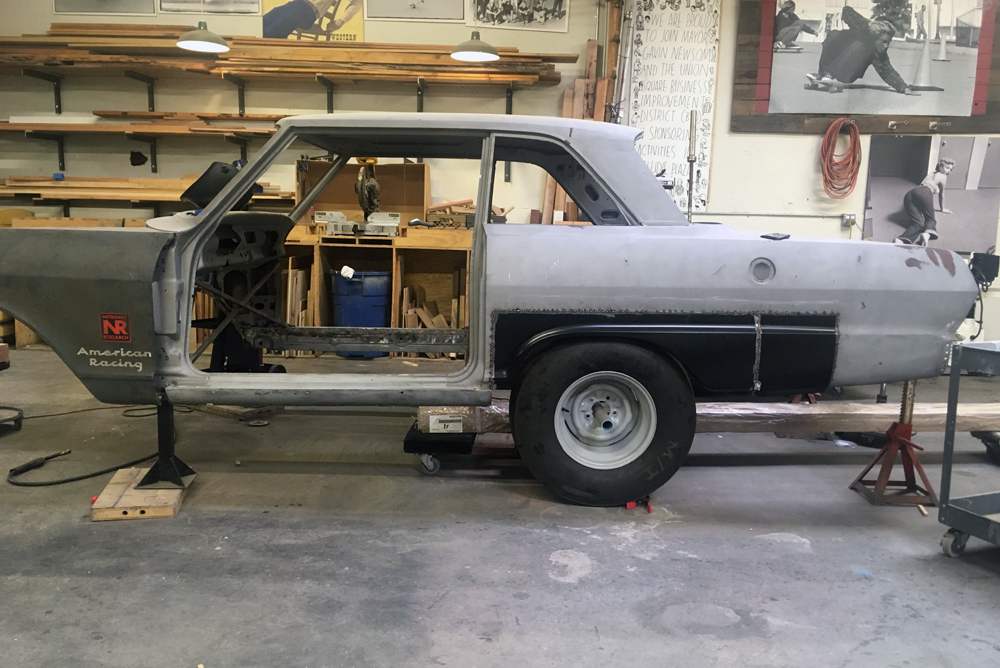 So that’s an overview for BANGshift Project 2 Timer, Altered Wheelbase ’64 Chevy II. We are on target to debut the car at the 2018 Good Vibrations March Meet and will feature the 14-point roll cage, chassis fabrication and coil overs, the engine build, the dyno at Westech Performance, then initial testing at local SoCal dragstrips.  We’ll even be painting it in-house. 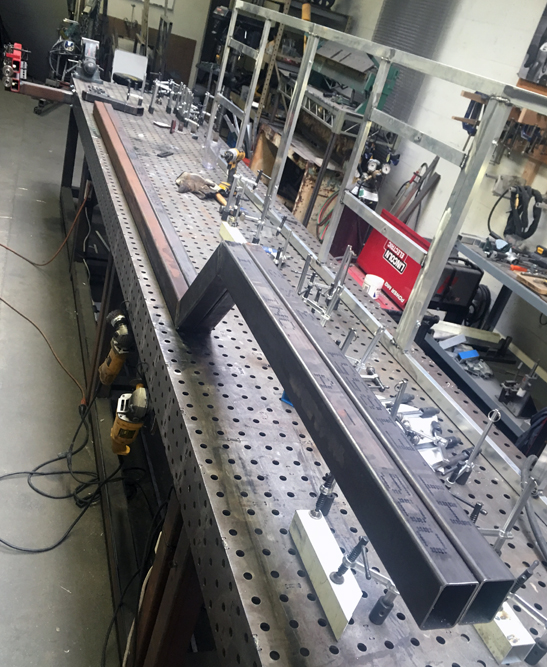 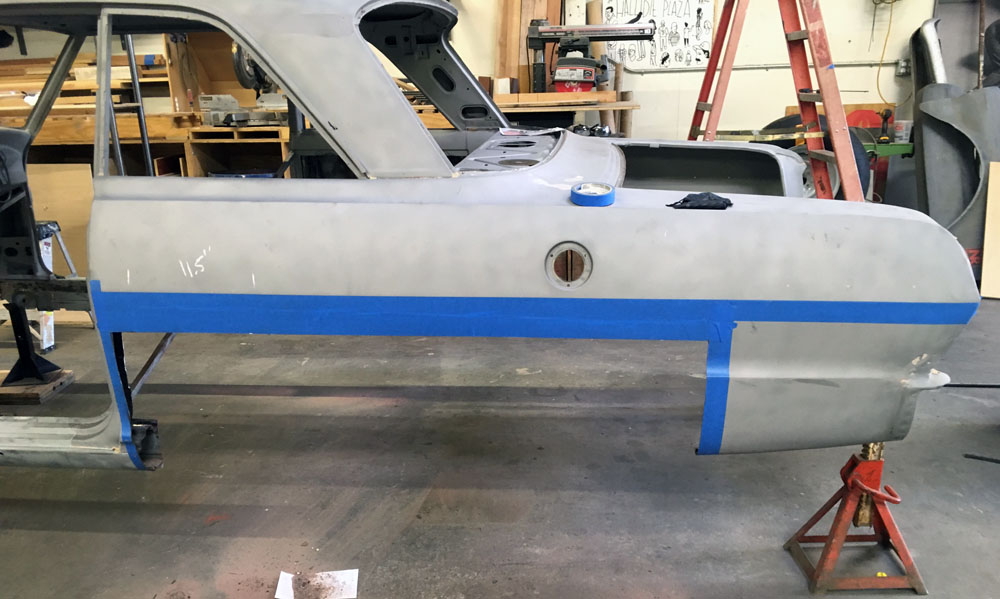 PSCA SCSN Anarchy At The Arch 2017 Gallery: Our First Round Of Photos From Thursday Night Testing! This 1973 Cadilac Caribou Was A Rich Man's El Camino That We Want To Tow With