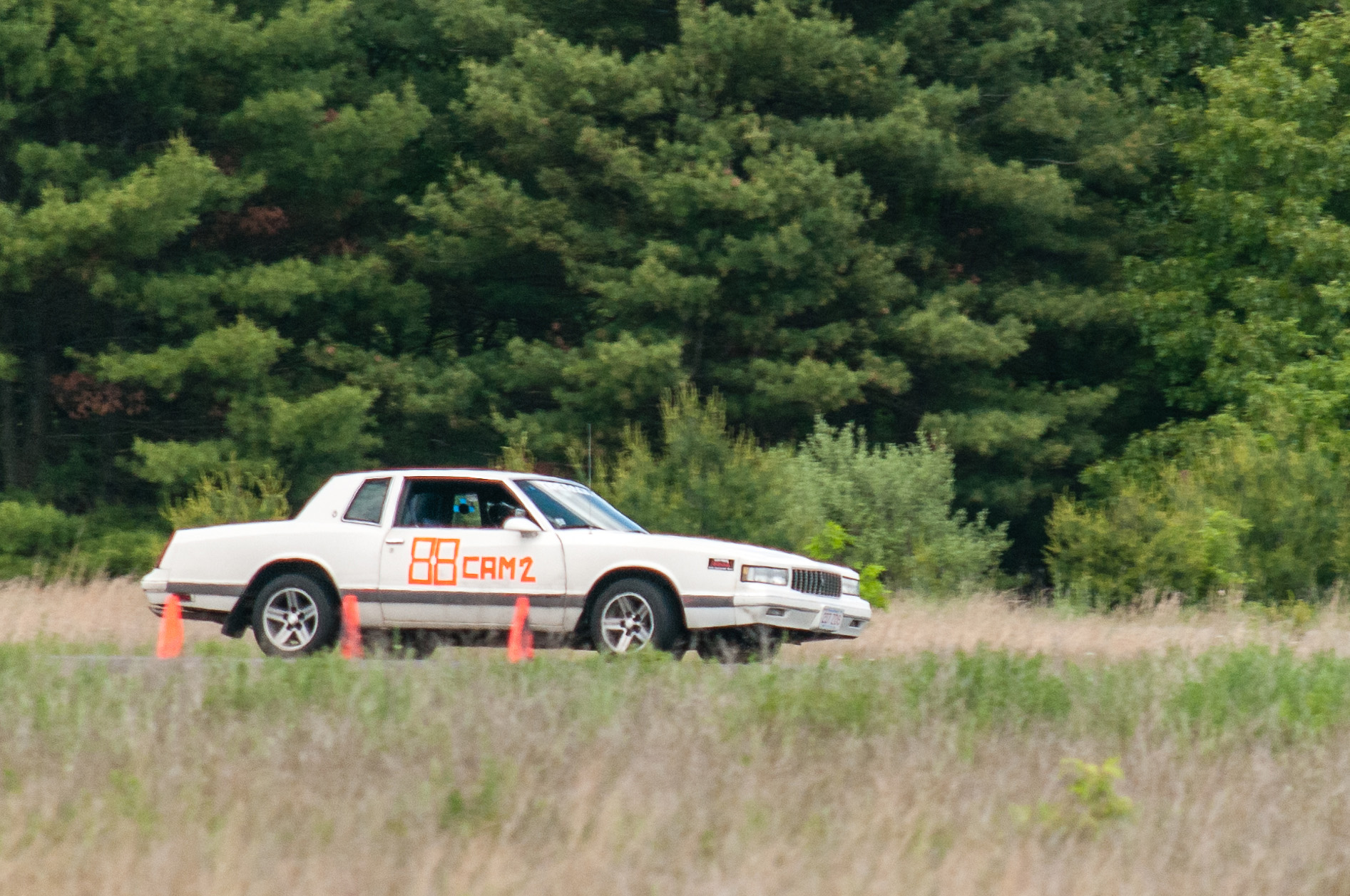 (Photos by Phil Trzcinski and the author)

[“Nut Driver” features updates on Dave Nutting’s attempts to daily drive his 1987 Chevrolet Monte Carlo in Massachusetts 365 days a year]
Before continuing on, if you want to catch up on the other installments, click HERE.

It’s been a while since I’ve updated this project blog as, to be honest, nothing really interesting happened with the car over the winter. It continued to start every day (Like you’d expect from a cream puff), I continued to rack up the miles, and life went on. BOOORRRING.

I made a resolution this year that I would attend autocross events on a regular basis with at least one of my Monte Carlos, but until this point life kept getting in the way, or as Lohnes put it, I was wimping out. So when I found out a few weeks back that the TireRack NorthEast Match Tour was rolling into town for June 7th and 8th and they were running the new Classic America Muscle classes, without thinking I pulled out my credit card and this happened: 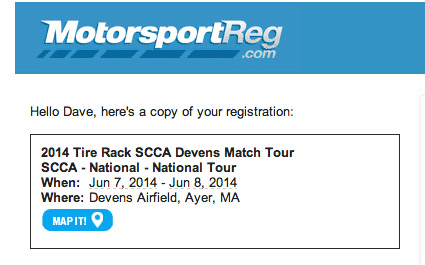 Yeah, you could say that I was committed now.

Due to a scheduling conflict I’d only be able to attend the Saturday session, but I knew it would still be money well-spent and I planned to make the most of it.

Now for all the “small stuff”, like buying a helmet, getting numbers, and making sure that the car will pass tech. Just like going to the drag strip, there’s a basic tech inspection before you can run your car, and it’s very similar: No leaks, tight wheel bearings, seat belt, and the battery firmly held down, among other things. The battery inspection will prove to be important later on in this story. That, my friends, is called foreshadowing.

As we do here at BangShift, we’re going to tell the rest of this story via photos and videos. As Lohnes was galavanting in Ohio and Craig Fitzgerald was busy washing his hair or something, my friend Phil Trzcinski was crazy enough to stand out in the 90 degree heat for 5+ hours to take photos of my heap going in circles, so many thanks to him for doing so. 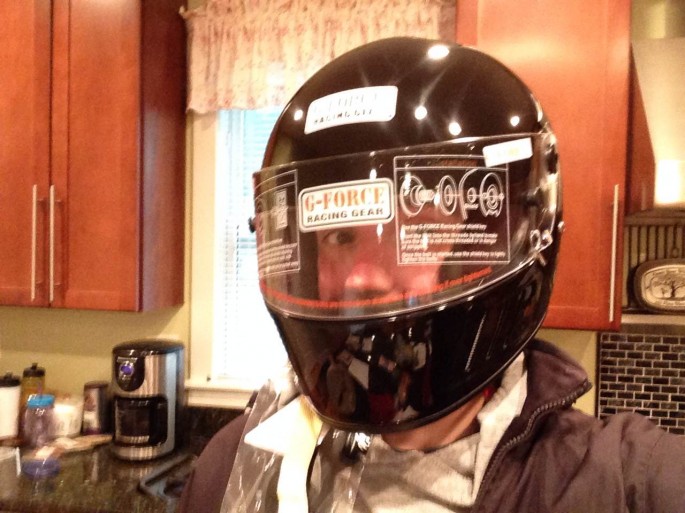 Helmet for dork (Good call on the large, Brian). Check. 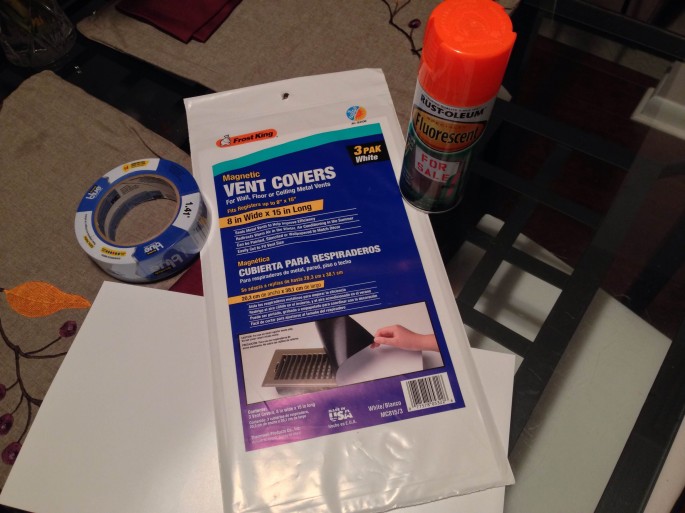 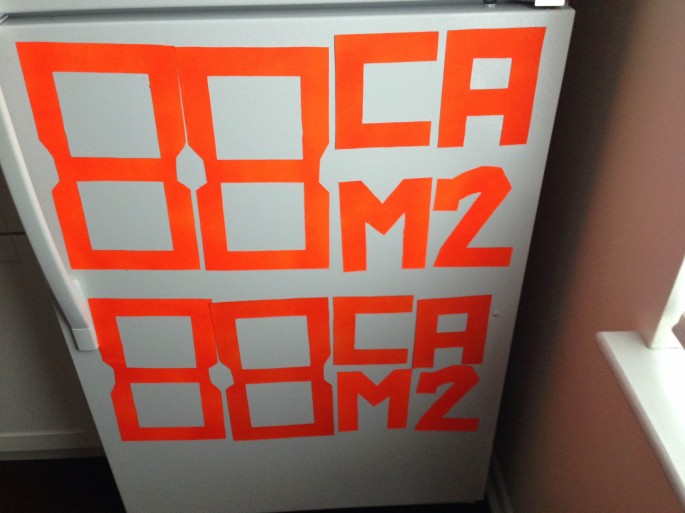 Numbers cut out, painted, and tested for magnetic properties on the fridge (Much to my wife’s delight). Check. 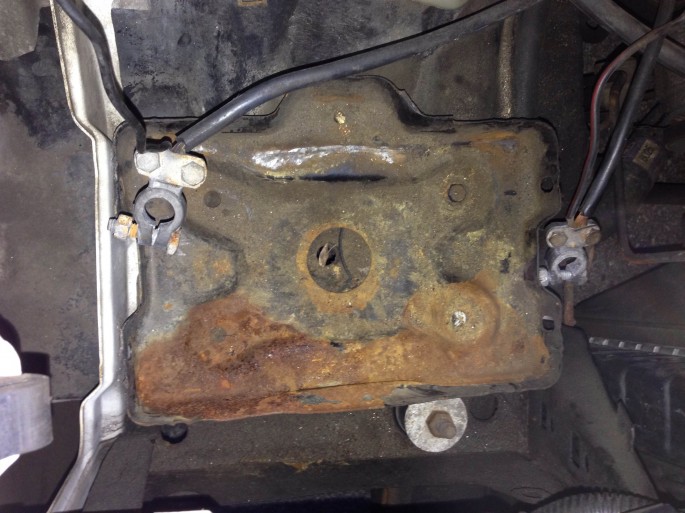 Ok, so it’s now the Friday before the event, my helmet is in, the numbers are ready, and my car is ready to pass tech. Well, so I thought until around 10 PM on Friday, when I realized while out for my birthday party of all things that my battery tray didn’t have a hold-down because the bolt had snapped off. Crap. 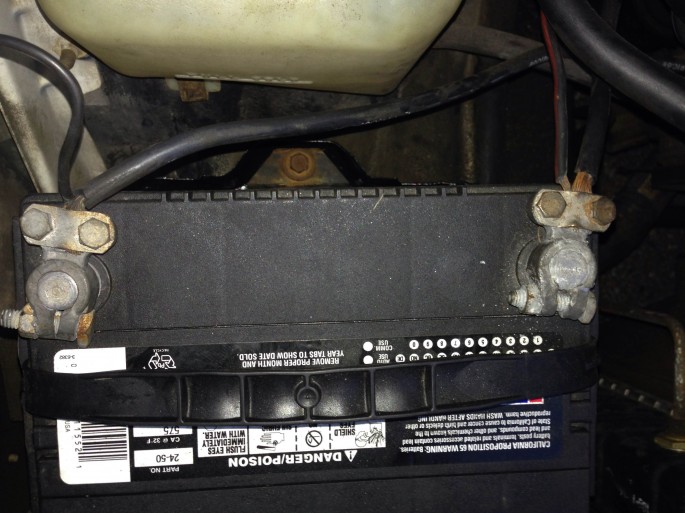 I knew that I had a spare battery tray and hold-down, so it was only a matter of getting up early and swapping out the parts. Of course, my “friends” did their best to make sure that I didn’t get up in the morning, but I managed to crawl into bed around 1:30, only to have the alarm wake me up at 4 AM. It sucked, but 20 minutes of work later I had a new tray swapped in and I was on schedule to get to Ayer, MA by 6:30. 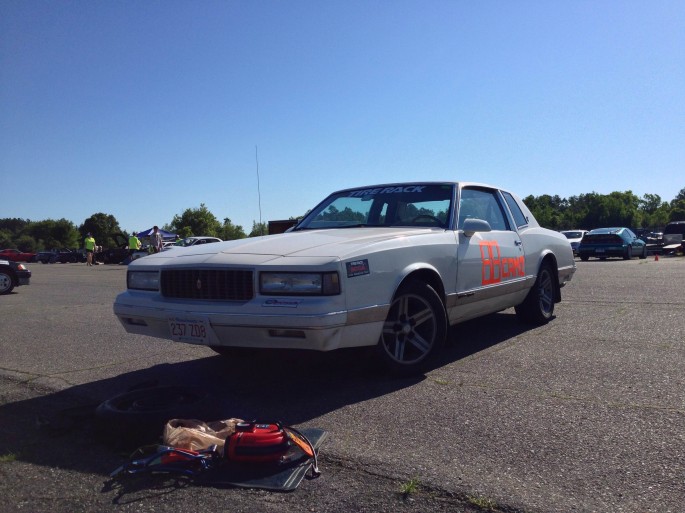 I roll by the endless line of Miatas around 7 AM and get the car teched. I was told by one of the techs that “the rear end has a lot of play”, but luckily the other tech knew what a c-clip axle was and let me by. I also got the mandatory TireRack and SCCA stickers. Stickers means race car, right? 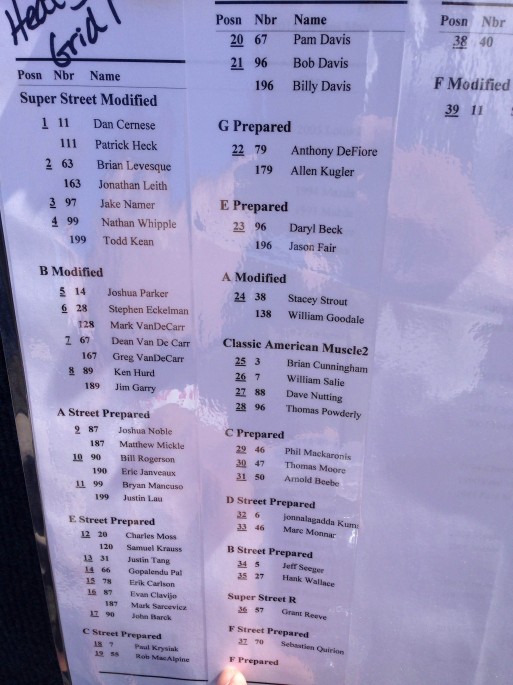 I was running in the CAM2 (’73+ Classic American Muscle, or “Pro-touring” cars) class, which was disappointingly light considering how many so-called “Pro Touring” cars are at the local car shows (Yeah, I’m talking to you). The other three entries were a ’95 Corvette, a 2002 Z06 ‘Vette, and a 2007 Shelby Mustang. Being in Heat 3, this meant that I would be hanging out during the first heat and working the second heat prior to getting in my four runs. 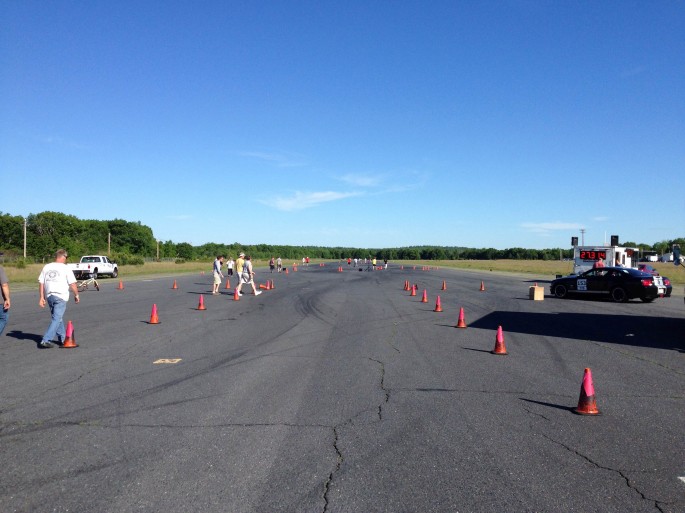 If you’ve never attended an autocross before, one of the most important things to do is walking the course. There’s only a few set times where you’re allowed to do so, but it’s crucial that you take advantage of these times to familiarize yourself with the course layout. With only a few runs, you don’t want to disqualify any by going off course. 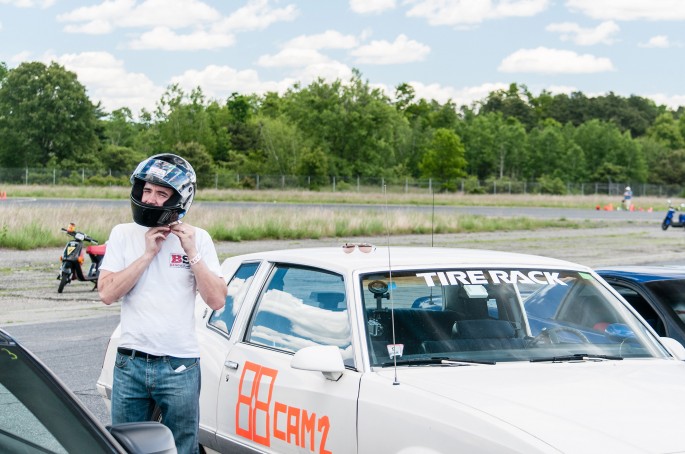 After working as a cone fetcher for the morning and getting a quick lunch, it was finally time for me to run. 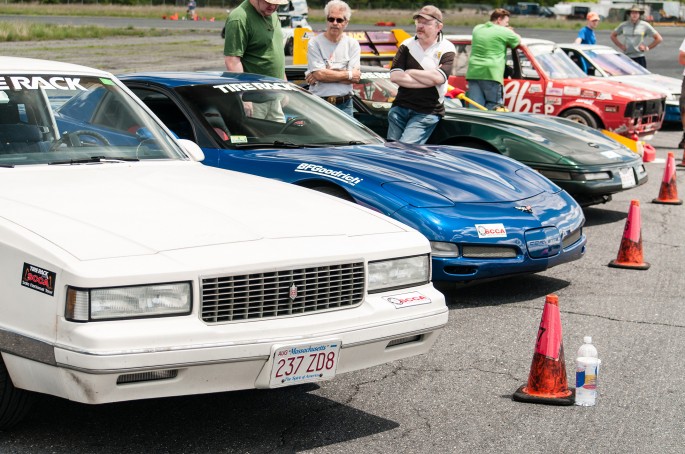 Each heat has multiple classes running within it, and you grid your car so that you run with the rest of your class. Cue the “One of these things is not like the others” song. 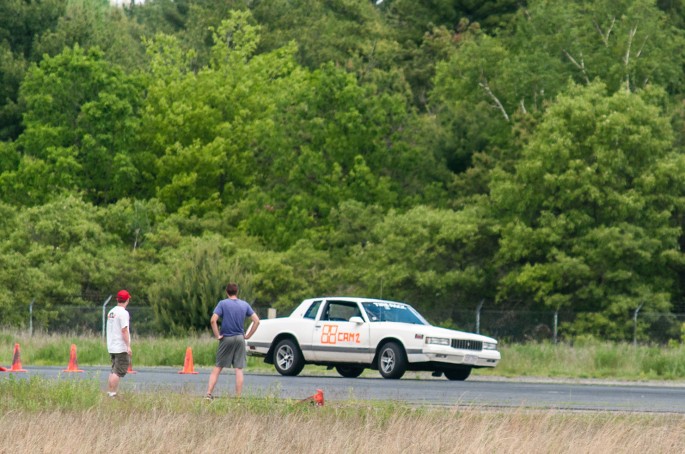 Seeing as this old G-body was bone stock aside from a set of Eibach springs, Bilstein shocks, Hotchkis front upper control arms, and 12″ Caprice front brakes (This isn’t an F41 car, so we’re talking itty-bitty front sway bar, no rear sway bar, and no frame bracing that the “performance” G-bodies received), the goal of my first run was to just keep the thing on-course… 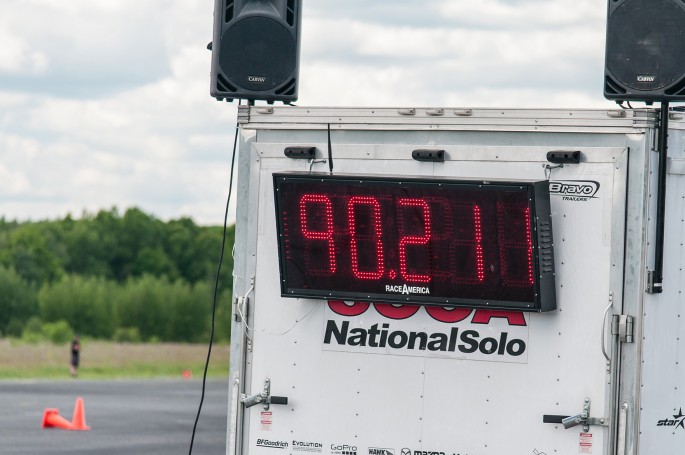 …Which, while it felt reasonably paced as the car wallowed about the course, resulted in a 90 second lap time. To put things in perspective, competitive cars were hitting times in the 50s to low 60s. As Phil told me that the announcer stated, “It was a tidy lap”. 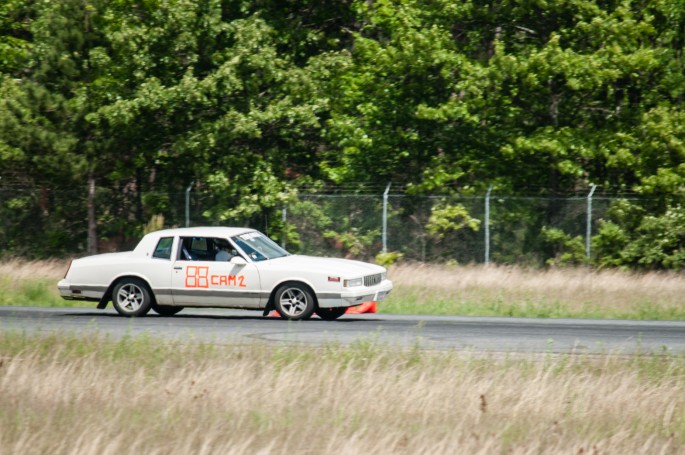 Now that I realized that the car wasn’t going to instantly explode mid-slalom, I knew that I had three more laps to improve my times. Cue Lap 2, which while it still wasn’t fast, improved by a 10 seconds over my previous time.

Below is the GoPro video of that second run. Fast Forward to the 3 minute mark if you want to get right to the beginning of the run. Note to self: Install bucket seats as the bench seat is good for dates but not for keeping you upright during a slalom. 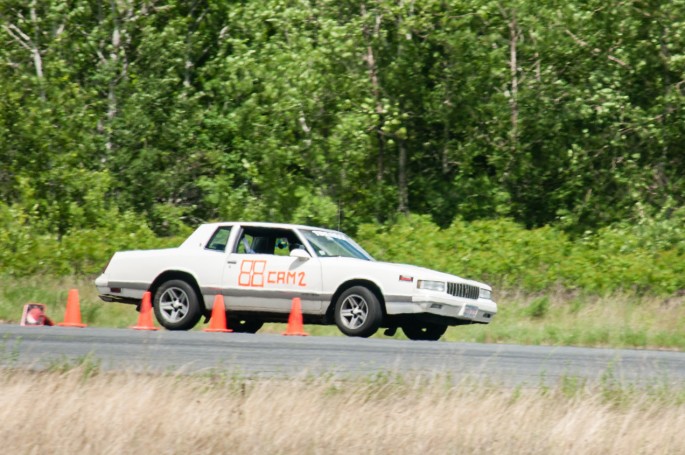 Sure, 80 seconds was still glacial pace, but a 10 second improvement is pretty solid and there was more to be found in the car as I was still not being overly aggressive with my driving. No GoPro video of my third run due to user error with one and a full memory card with the other, but I managed to whittle another couple of seconds off with my third lap.

Here is the fourth and Final Run. Again, improving over my other runs, with a 15 second total improvement from first run to last, but still not enough to get me out of the basement of the CAM2 class. Doesn’t matter, as I was pumped to still be improving. 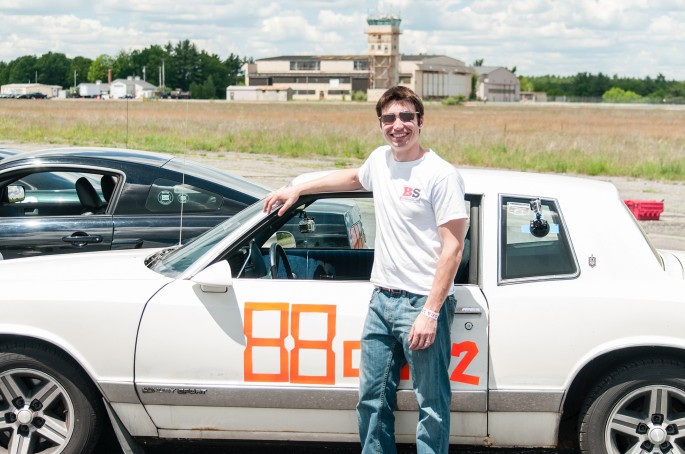 Autocross to me is very similar to drag racing in that, end of the day, it’s really just you, the car, and the clock. With a finite number of runs, it’s less about what high-dollar parts you have strapped to the car and more about how far you can push yourself mentally to keep driving faster. I’ll admit that I’m not what you would call a good driver, so much of the improvement is going to be the result of tightening the Nut behind the wheel through more experience and coaching. Needless to say, I’ll be attending more events throughout the year, and you fellow BangShifters should be too. No excuses about your car “not being set up to take on those Miatas”, because the CAM class is specifically for your car. If you’re in the New England area, the next SCCA event is June 22nd. I’ll be there. Will you? 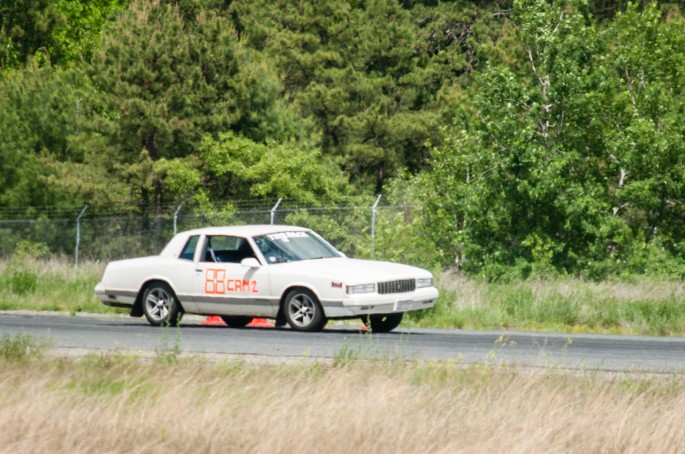 2014 Hunnert Car Heads Up Coverage: Raw, Fun, Cool Drag Racing The Way It Used To Be - Big Fun! Out On Power Tour? Go See Matt Graves And The American Powertrain Boys In Their "C-Heap C10" - It Rules

9 thoughts on “Nut Driver: 4 AM Repairs And Autocross Action!”