Project Great Pumpkin Mustang: Getting Back To Work After Nearly A Year! 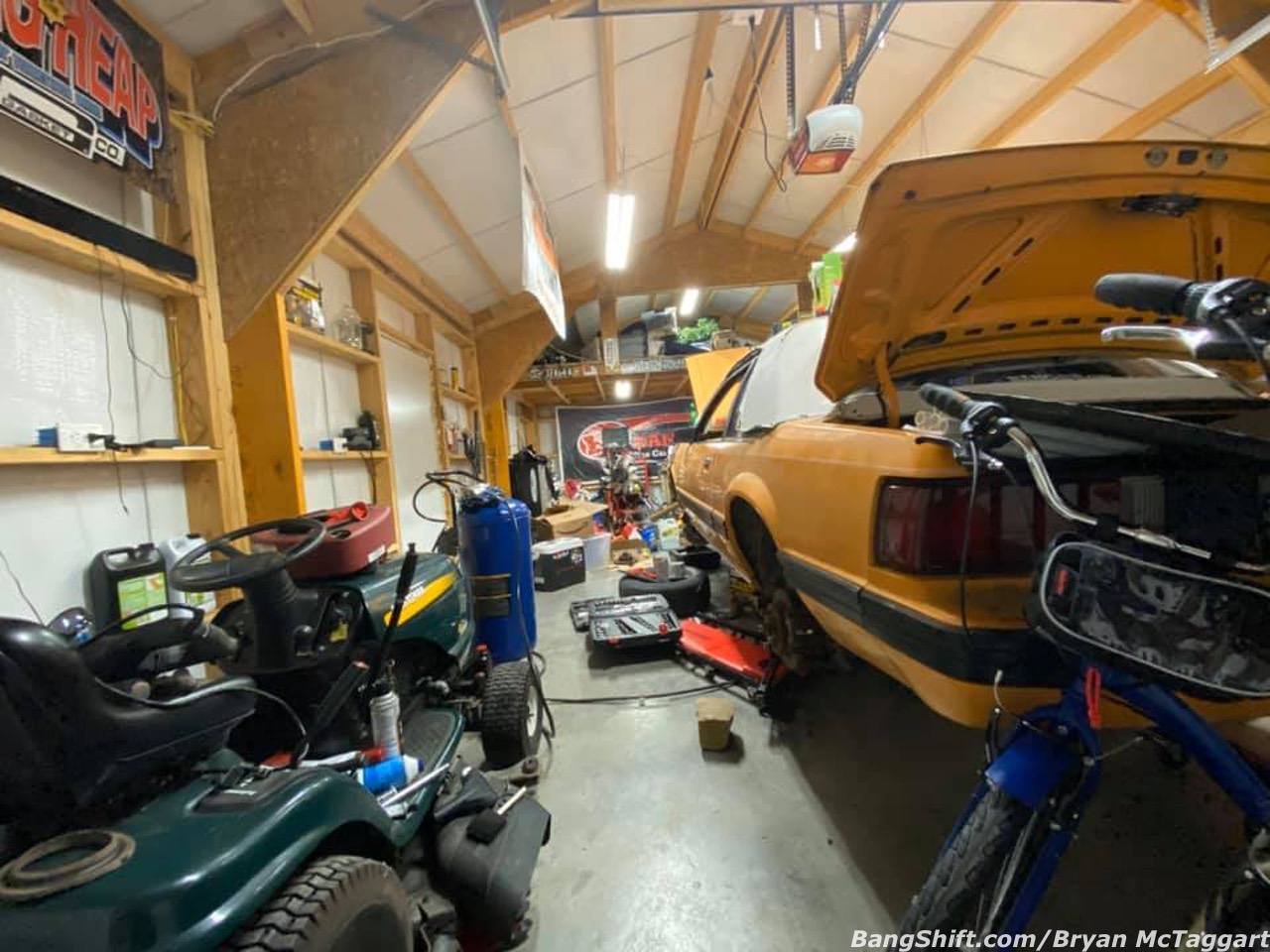 I had such good intentions when I started gutting the original suspension components out of the 1980 Ford Mustang Ghia that we call the Great Pumpkin. I had the spindles, the rear axle, everything ready to go, and by early April of last year, everything was out of the car except for the front struts and suddenly…I stopped all progress. And I mean stopped. From about mid-April until two days ago, I hadn’t laid a finger on the original Fox Body resident of BangShift Mid-West. The car hasn’t even been started since then, and there’s a reason for that you will read about in the photos below.

So, what caused me to ignore building my wife’s car? Distractions. First there was the Imperial’s transmission dramas. Then there was the work that went towards the Dirty Cougar before I sent it down the road to a buddy. Then there was the arrival of the Cruze, the summer work schedule, the oppressive heat, mowing, and the next thing I know, it’s turkey, presents, Auld Lang Syne and suddenly I find myself looking at two Fords, one that is sitting outside in the rain as I do work here and there, and one that is sitting in a nice and dry shop, gathering small spiderwebs. So, the new plan: if it’s sunny and warm out, the Rough Start Fox gets some work done. If it’s pissing down rain, the Pumpkin gets some love. And if it’s cold enough to freeze the nuts off of a Jeep, I’ll cave in and stay inside…my garage does not heat up well. But that’ll be a much more productive plan than the all of last year! Here’s some of the progress of the last couple of days and expect more to come down the pipeline quickly, now that I’m focusing on the Fords for a while! 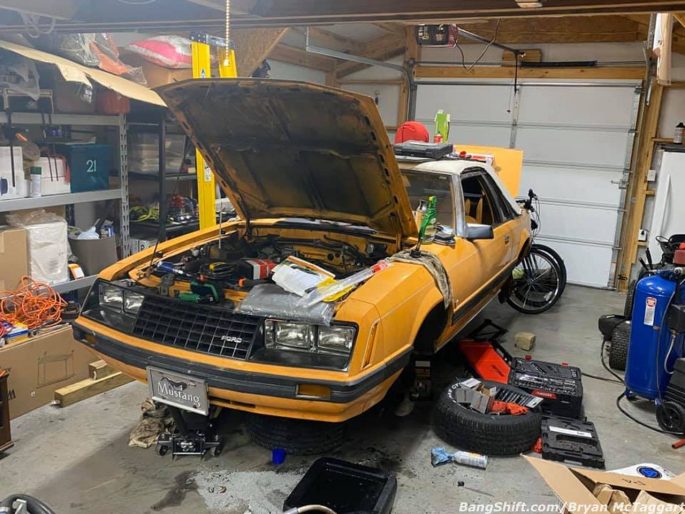 Yes, my garage is a pit right now. But that’s because work is in progress. I’ve managed to get most of the random crap stacked on top of the Mustang moved away from the scene, at least, and the car is on jackstands with the old steel wheels and tires from the Cougar acting as emergency supports. Why work on the car now? The truth? The roller 302 and the engine hoist are in front of the car, and despite what you see, there isn’t enough room to get the hoist out of the garage at the moment. 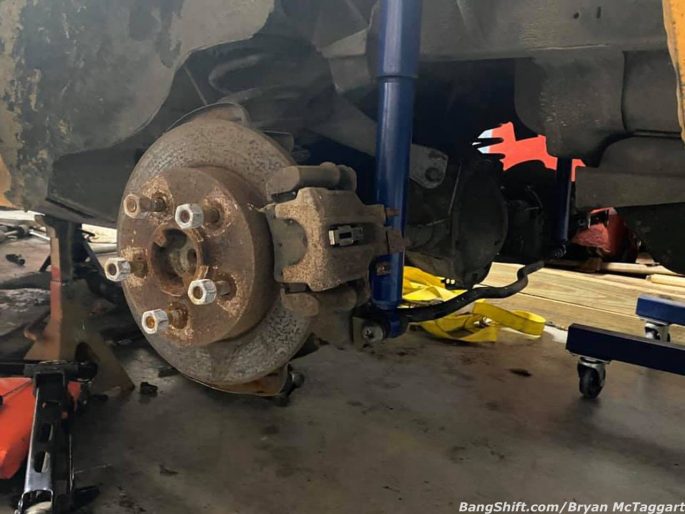 Yes, it’s a 7.5 axle, but it’s still got better gears than the four-lug 7.5 that came out of the car and it’s got rear discs too. The coils were also raided from the ’94. New calipers and rotors will be put on the car before it hits the street on it’s own power. The shocks were put on before the car got parked in March. 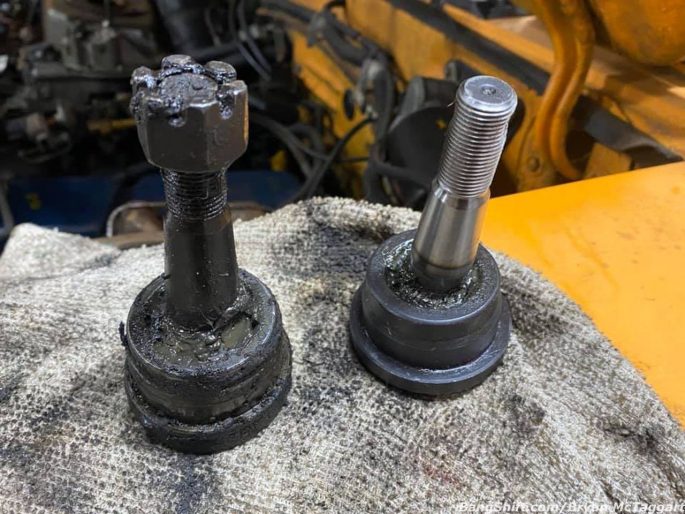 Another first-time job: press-in ball joints. Now I understand why my father, stepfather and just about everybody else hated these bastards…even with the proper tool, it’s a workout and a half to get these things out, and that’s with a little bit of heat. Both ball joints were shot, with caked grease the only lubrication left. The driver’s side is installed…come the morning, the passenger side will (hopefully) go in just as peacefully. 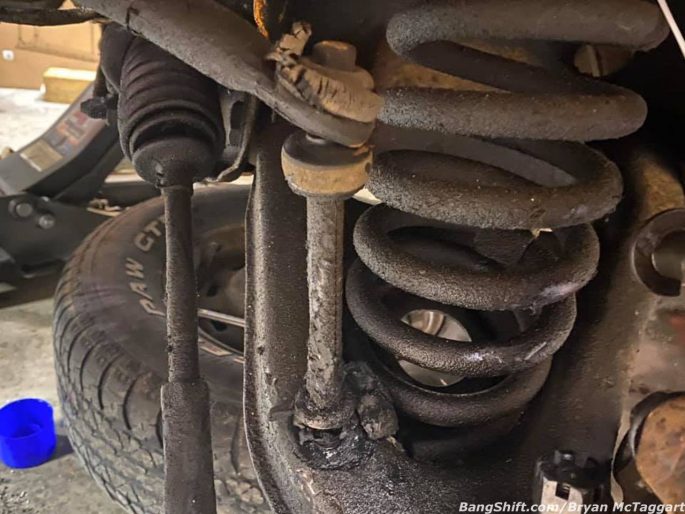 Adding to the list of items the Great Pumpkin needs: front swaybar end links. The rubber on these things is destroyed. I also need to go ahead and take care of the leaking power steering pump and/or lines while I’m getting all of this done. The reservoir has already bled out it’s entire load. 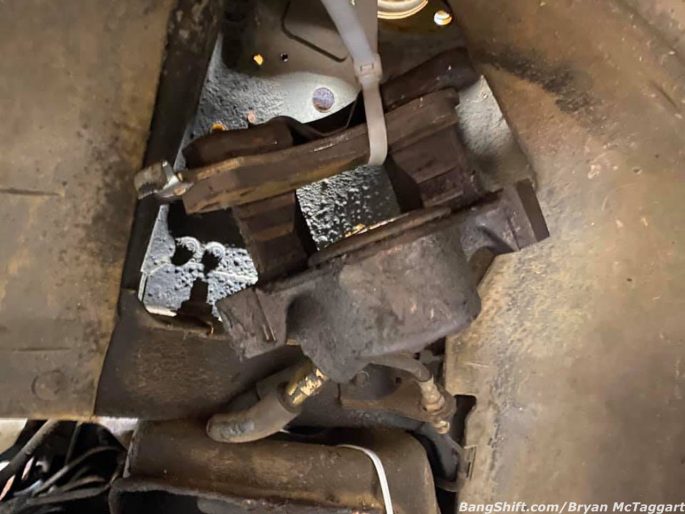 Happily, not everything coming off of the car is destined for the scrap heap. The front brake calipers, soft lines, and potentially rotors have been earmarked to go onto the Rough Start Fox. The red Mustang’s driver-side caliper likes to stick shut under braking and had to be collapsed back with the bleeder valve opened, a piece of lumber, and several good smacks with a heavy hammer. 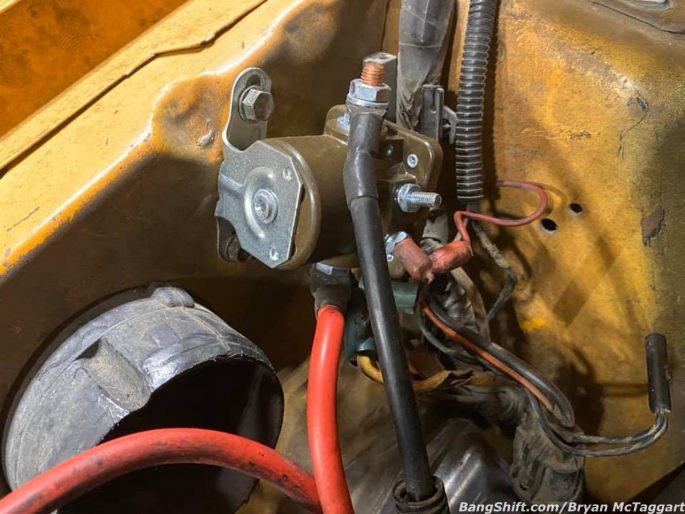 Now, about the car actually running…just before the Mustang got pushed into the shop last year, something happened between the starter relay and the starter itself that could best be termed “electrical death”. Do you see that small yellow wire that curves underneath the big black wire? Notice how it’s split open? I’m pretty sure that either the old relay or the starter packed up. That’s a new starter relay that I tried out last August, to no avail. I have a new starter I need to install, so once I re-sheathe the yellow wire, I’ll see if the 4.2L will bark once more. 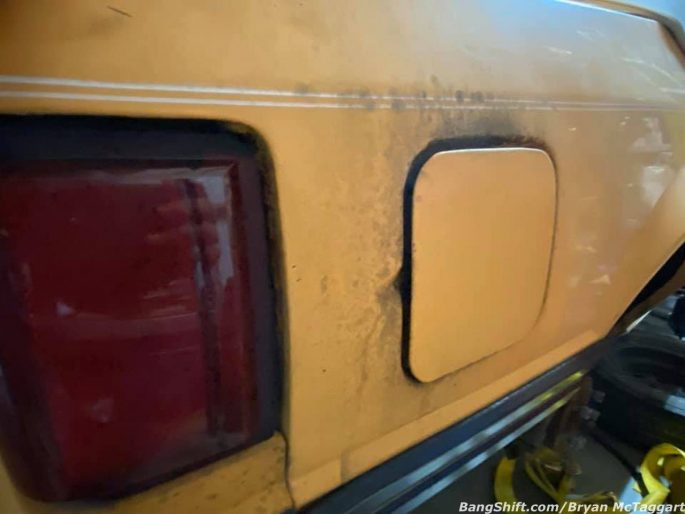 Another issue to address on this car is the paint. This is a constant headache for me, since the Pumpkin’s coat of Bright Caramel is self-removing. I personally don’t want to paint the car until we figure out what to do with the peeling fake cabriolet top, but my hand might be forced if this car keeps growing…whatever the hell that is. 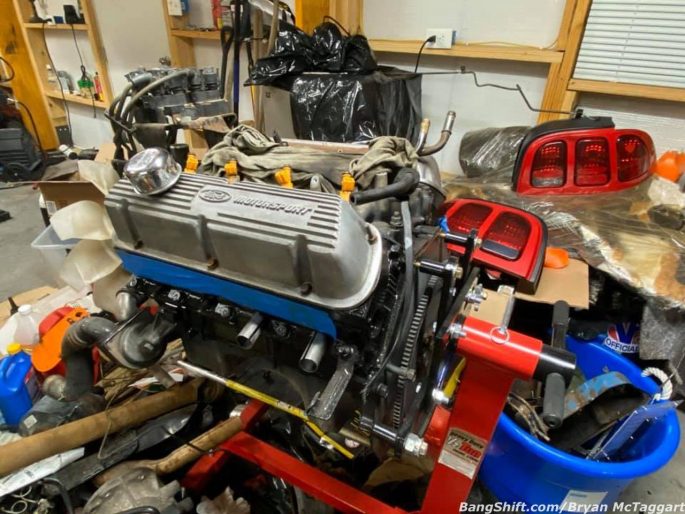 And just for a wrap-up, this is the endgame for the Pumpkin. This is the 1998 GT-40P 302 that came out of the Rollover Explorer from a couple of years ago. It’s been patiently waiting on the stand, sealed up and left alone. It needs to be converted to a carbureted intake setup, distributor-driven ignition, and treated to headers before it gets stabbed into the engine bay. It also needs one broken valve cover bolt extracted. Not looking forward to that job, if I’m honest. I’d rather fight the ball joints first!

3 thoughts on “Project Great Pumpkin Mustang: Getting Back To Work After Nearly A Year!”