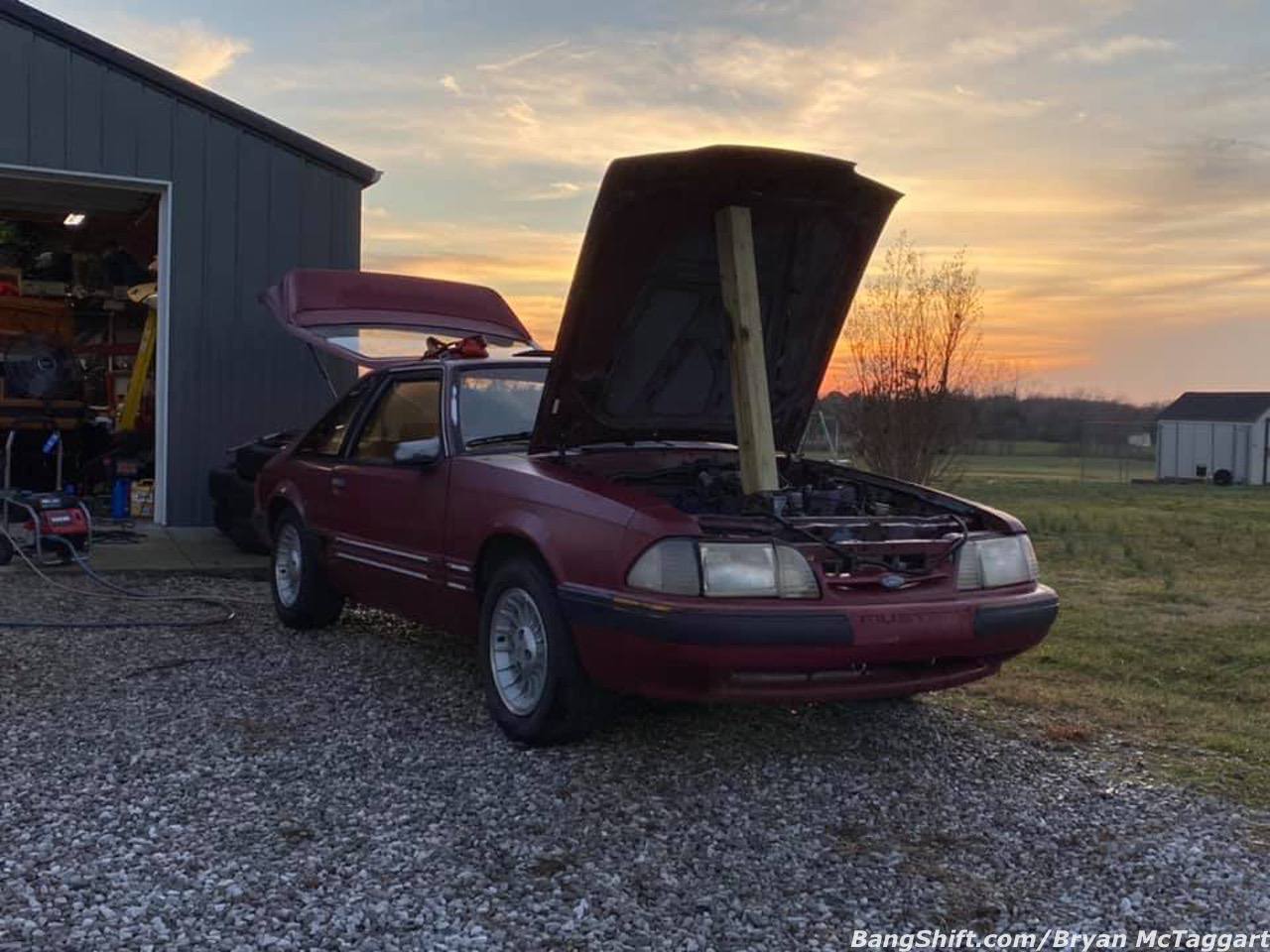 From the moment I got hired on to write here at BangShift, I’ve championed the idea of spending the least amount of money to have the maximum amount of fun in the process. The Rough Start series was based around that entire principle: five thousand dollars should be more than enough to get something together that can be fun to drive, fast enough to get you into serious trouble, dependable enough to daily if you have to, and safe enough that you won’t fall through the floor at the first misjudged pothole. Is it an achievable goal? Yeah, it is. It’s pretty much been the mantra of all of my project builds:

Those are just a few examples. You see, I like the idea because I live the idea. I don’t have a shitload of money to throw around on a four-wheeled toy. I don’t know many people that do, and even those that are blessed with cash understand the idea of saving their pennies and getting the best deal for their dime. It’s usually a hot topic when I’m hanging around with the bosses and we are actually talking cars. It’s been discussed when I’m in a wrench-throwing mood and I’m threatening to turn the Imperial into a pile of soda cans. And it’s something that I have wanted to try out pretty much after whipping up the Rough Start series in the first place.

There were plenty of vehicles on the list of possible choices that could’ve been picked. A G-body Malibu has been high on my build list for decades, same with an El Camino. A third-gen Firebird, a Dodge pickup, maybe an MN-12 era Thunderbird, Cougar or Lincoln if I was feeling really adventurous. I wasn’t hunting so much as I was waiting for a deal to come along. If one got my attention, I would strike. Or so I kept telling myself as I pawed through Craigslist and Facebook Marketplace day after day. 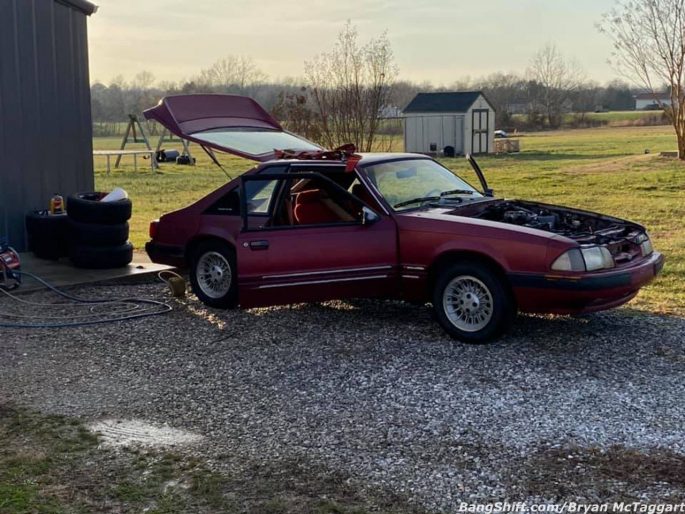 Here’s how this all came to be: I learned that James Rowlett, the man behind the “Boost of Burden” Mustang and one of the key players behind the Caprice of my dreams, had made a deal: he was buying a badass rear axle assembly for a DXP racer he’s involved in, but the deal was that he had to buy the car it was bolted into as well. I saw the pictures of a more-or-less together Fox body that he was going to rip the axle out of and…well, I had to find out. So I inquired to how much he’d take to part with the rest of the car. Discussions took off, and in short order I was towing this 1989 Mustang LX home, complete with an 8.8 rear end slammed in to make it mobile and a surprisingly nice set of GT turbine wheels bolted on, lighter in the wallet by $600. So…what’s the plan here? Consider this multi-stage. The first stage is to see just how cheaply I can get this car running and moving. The second stage is to get this car to become competent, and stage three, if I get there, is to actually start building something good. Right now, let’s focus on baby steps. 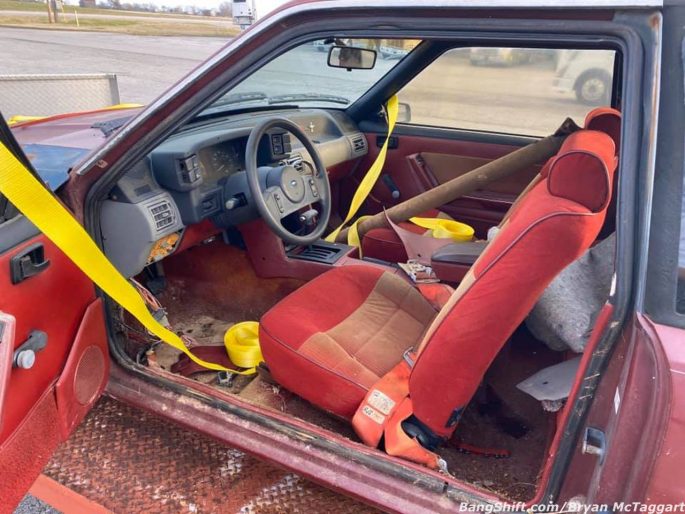 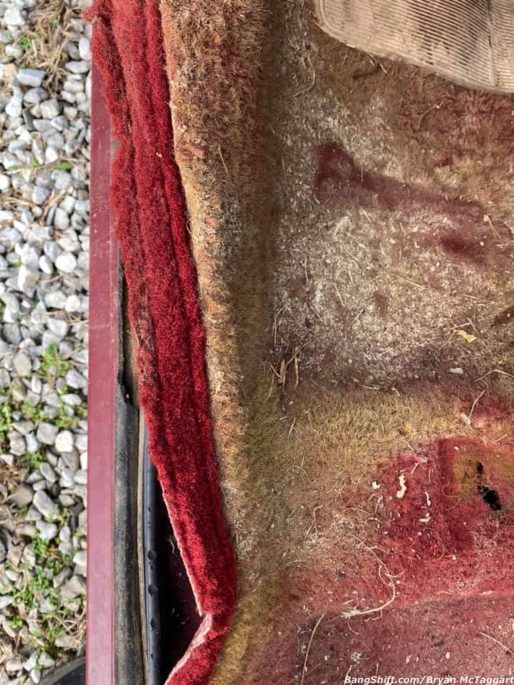 The first couple of days have simply been assessment and cleaning. It’s obvious that the car has been in water…there’s a tide mark in the interior, the carpet is a genuine HAZMAT concern, and I rinsed enough silt out of the hatch area to pan for gold in. The 2.3L four…rather, what’s left of it…is a boat anchor with no hope of being resurrected in my shop. The automatic might work, might not, and I know nothing about the rear axle yet. The only remaining OEM body panels on the car are the monocoque, the rear bumper cover and the cowl…the fenders, doors and hatch came from other cars. It’s taken either one good hit or two minor hits in the front end, evidenced by the damage in the “engine box” area. The interior is shockingly complete for the price, and I can’t find any body rot. I even jammed some fuses into the block, threw a battery in the car, and got some electrical life to appear. It’s not perfect, it’s not pretty, but it’s everything I would want and need in a Fox build. 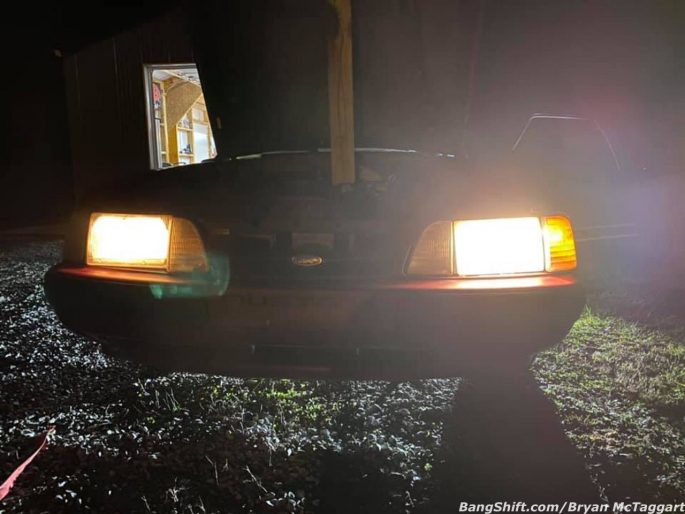 Do I have a plan? Eh…it’s more of “as I go”. I know that I want to keep the turbine wheels on it as long as possible. I know that the E7TE roller 302 that I yanked out of the 1994 Mustang that gave it’s suspension to the Great Pumpkin project will fit perfectly once that four-banger is gone. I know that I’m ordering new carpet and insulation the second the silt-stained garbage is stuffed into a dumpster. But that’s the only cemented items on the list at the moment. I’d like to convert the car to manual trans, I’d like to get the car one uniform color (I’m not worried about bodywork but the patchwork of colors is making my eye twitch) and I’d like this thing to be rowdy enough to beat on by early Fall, which I think is doable in one form or another.

I’ll be keeping tabs on the costs of the car, too, much like I did for the Dirty Cougar revival project. You will have full transparency of what it takes to get that random three-digit car put back to operating condition. If I buy bulbs, you’ll see the cost. If I buy tires, you’ll see the cost go up dramatically. I guess the first goal is to get it running, driving, rowdy and street-legal within the five thousand dollar Rough Start boundaries. At least I’m starting low dollar!