The Charger – Honeymoon’s Over, Let’s Check Out The Bad Parts Of Our Late B-Body 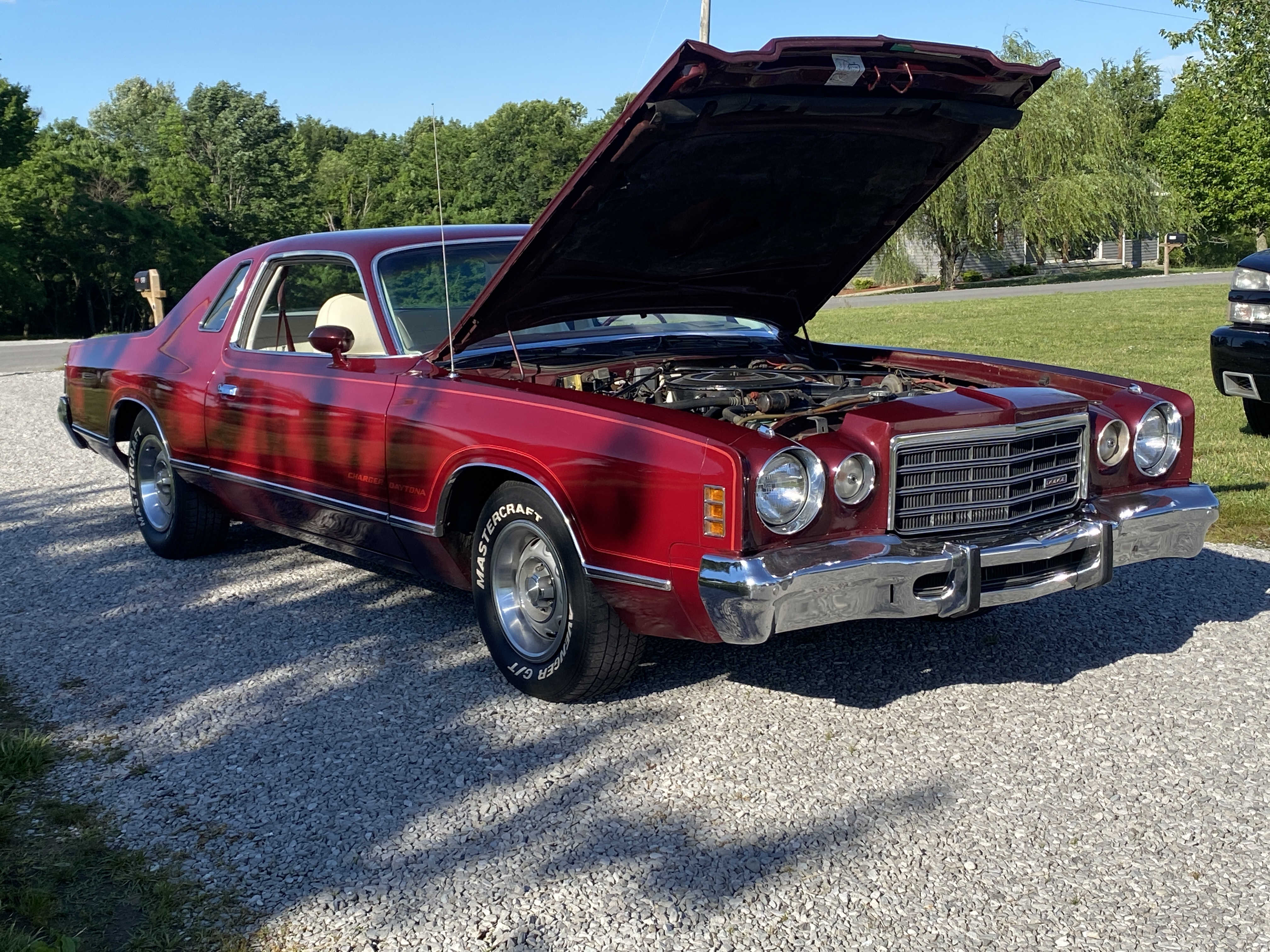 Did you miss the introduction to the Charger? You can read about it here!

Now that the odometer is reading about a thousand miles more than the day I brought it home, it’s high time I started looking at the 1976 Dodge Charger Daytona I recently acquired. The honeymoon phase that comes with buying the car you’ve been trying to get for years has been great, but that can’t last, so let us return to the reality of keeping a 45-year-old car on the roads. Low mileage and decent condition be damned, wear and tear is going to happen, I don’t care if it was kept in a climate-controlled garage and was inspected by Jay Leno’s top man every six months just to make sure things were top-notch. In fact, I’ll bet money that Leno himself would tell you the same thing!

Rather than listen to my heart and drive this thing until something major goes wrong, for once, my brain overruled and instead we put the car up on ramps and started looking everything over. Happily, there isn’t a lot to worry about. There are, however, things that will require some addressing. I’ve started with some small tasks, while larger ones will be held off until the winter months when the Dodge will be stored away. This isn’t so much a wish list or a complaint list. This is more of a way of keeping notes on this car and a way to hold myself to my word when it comes to not doing stupid shit to the car I’m adamant will be my last project vehicle. So, with that, let’s get started… 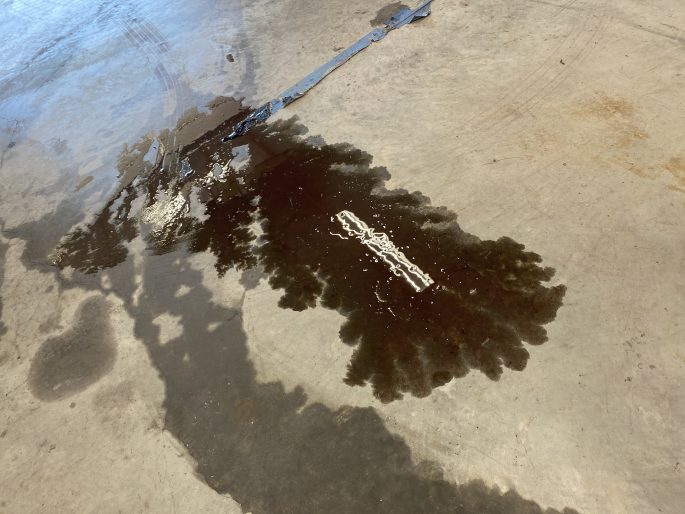 Ugh. Like an excited puppy, the Charger was more than happy to mark its territory once it was introduced to its new home in my shop. The trans pan gasket was crumbling at the forward edge, allowing ATF to bleed out. One new pan gasket and five quarts of fresh fluid later, the job was done. We hope to not see another murder scene on the concrete again. 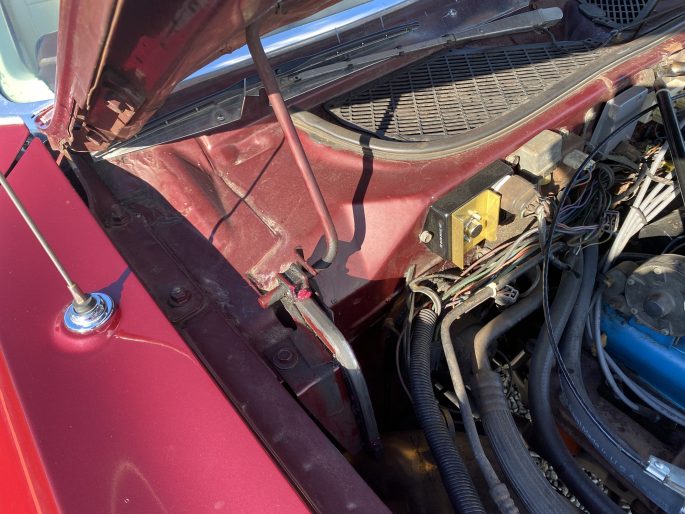 The hood hinges on these late-B Mopars are pretty damn cool, if I must be honest! Only problem? They need to be greased up properly so that the passenger side resists the urge to grip and hold in place. That’s a big hood and I do not want to have the crease at the halfway point. 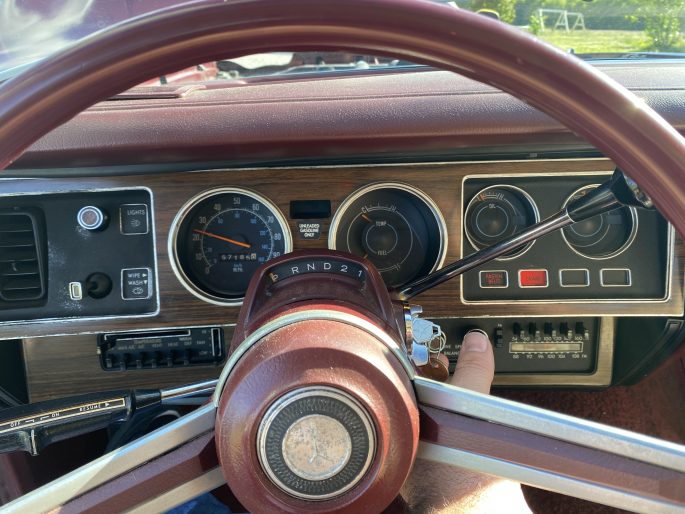 The command center of the Charger. I have working gauge lights, shut up. What I don’t have is working gauges. When I turn the key, I get the belt warning and buzzer…and nothing else. Take note: that is a Plymouth steering wheel center cap. And might actually be correct to the car…Chrysler did some very sketchy things back in the day. 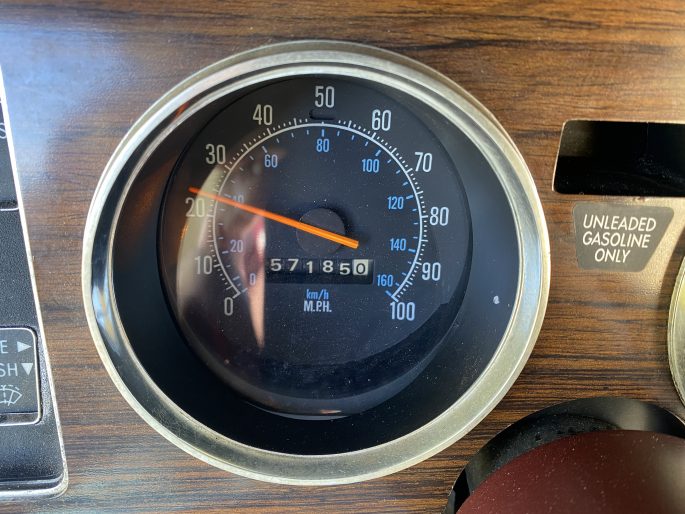 The speedometer sits at about 25 mph at rest. It does move when the car gains speed, but the reading is disproportionate to actual travel…45 MPH on a GPS speedometer is read at about 70 MPH, for example. I suspect that the clock spring is out of place, since there is no “bounce” to the needle. Hopefully that’s an easy fix, but I’m doing research in the meantime on how to actually get there without removing the entire dashboard. 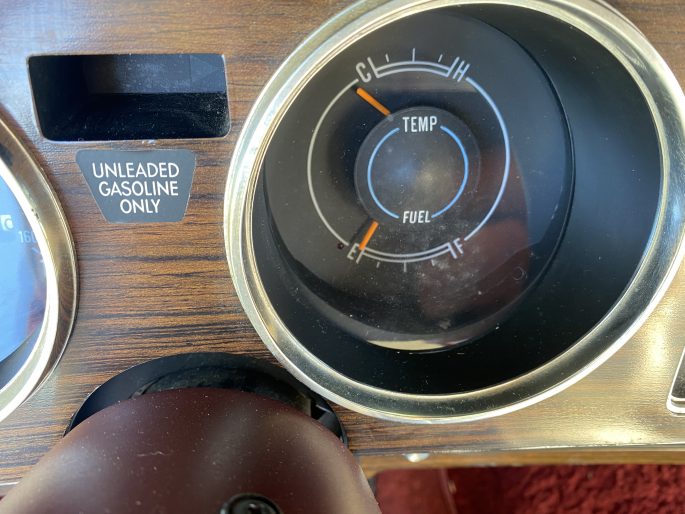 The temp gauge doesn’t move an ounce. The fuel gauge has signs of life, but only to 1/8th full for a topped-off tank and it pancakes quickly. Concerned about the fuel level in the tank? Better go top off at the nearest 100% gasoline pump. Yeah, I’m paying for it. 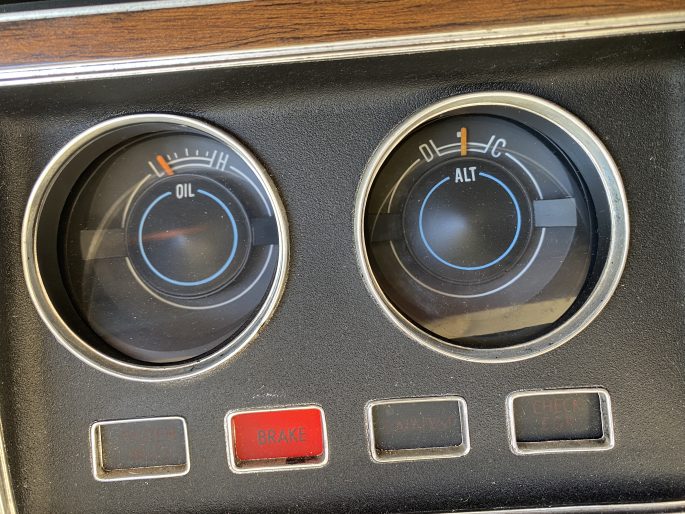 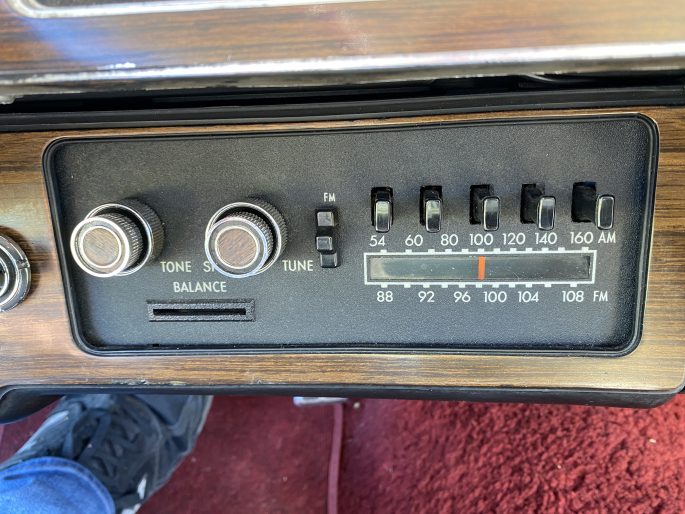 The radio actually does work, and fairly well, too. Needs new speakers though. I’d like to have this actual head unit fitted with either an aux port or be converted to be Bluetooth capable for road trips…anybody got any ideas? 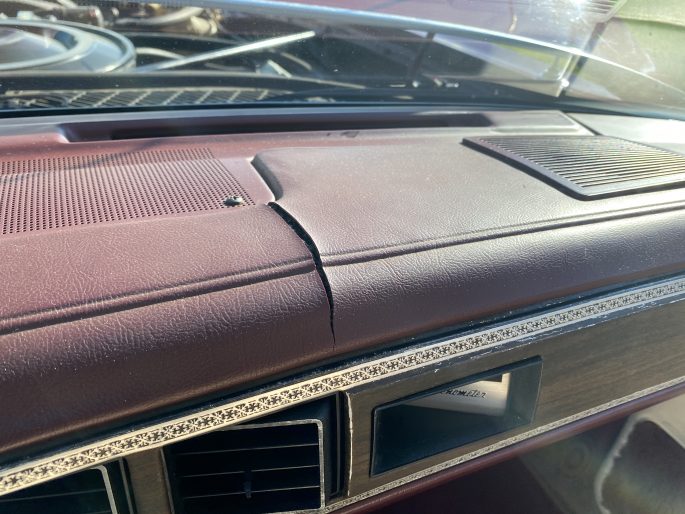 Most late-B dashes crack here. At some point, this will be sent off to be professionally restored. 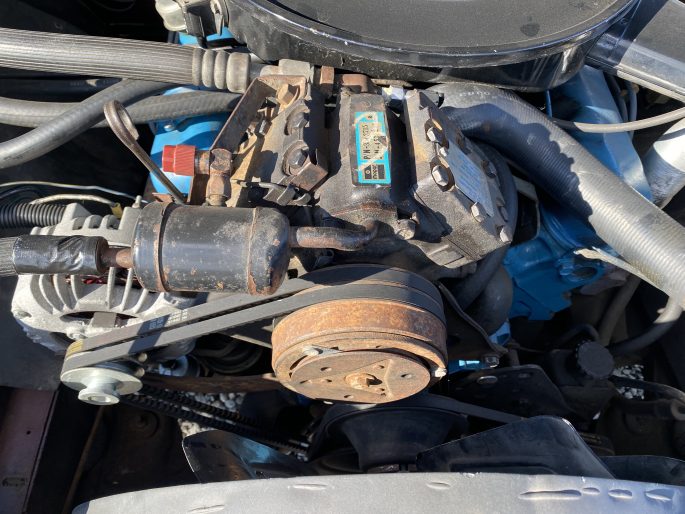 If it’s going to be a cruiser and roadtrip car, air conditioning is required. If that killer white interior has any hope in Hell of staying white during the summer months, A/C is a must. The factory Chrysler unit has been converted sometime in the past, but I don’t see the clutch kick on at all and I’ve cleaned the contacts at the compressor. 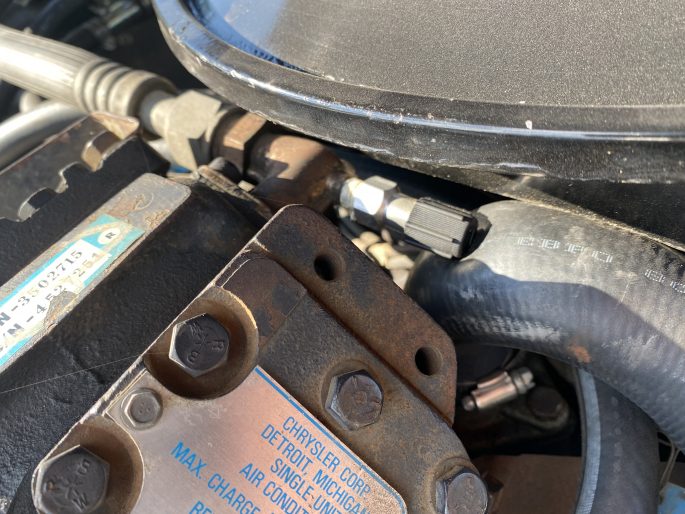 …um, yeah. Should probably do something about this while I’m at it. Do not need that hose being rubbed through. 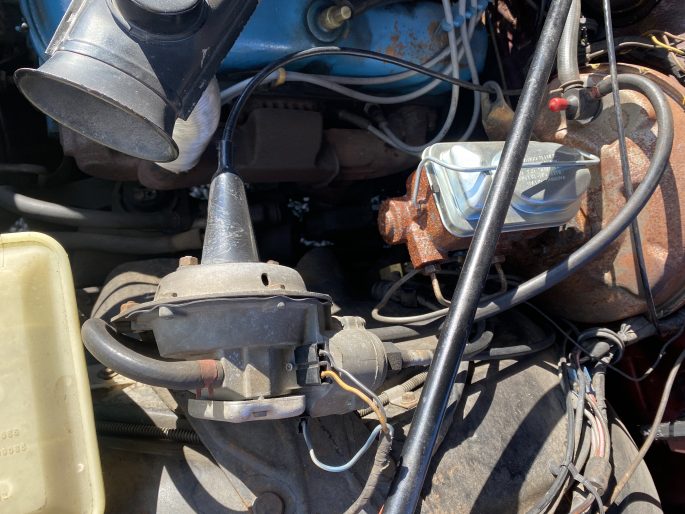 Cruise control, another non-op unit. Most later 1970s Mopars I’ve seen that were roadworthy in any sense had functioning cruise, so I’m curious to figure out what’s not working here. Again, I did clean up the electrical contacts first. 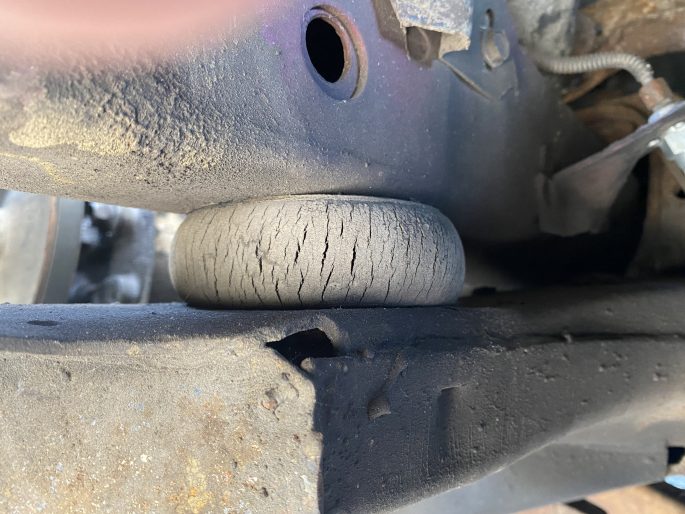 Rubber isolators for the subframe. Chrysler marketed these as a move towards a smoother, luxurious ride that reduced the harshness of the road from the driver. A nice thought, so long as the rubber isolator doesn’t look like a freshly-baked sugar cookie. 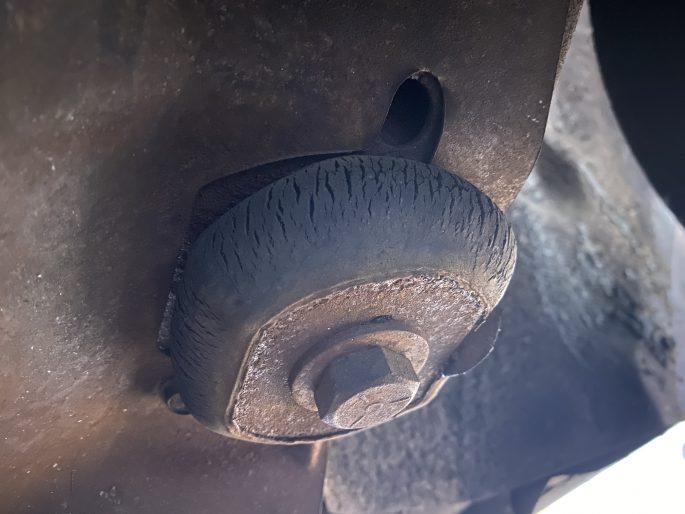 While it would be easy enough to let these go if it was just edge cracking, it’s not. The passenger/rear bushing is missing about a fifth of the rubber material from where it’s chunked away and the others are threatening to do the same. Firm Feel has solid puck bushings that will be better in the long run. I used solid puck bushings in the Mirada and Imperial, and was never bothered by a lack of squishiness. 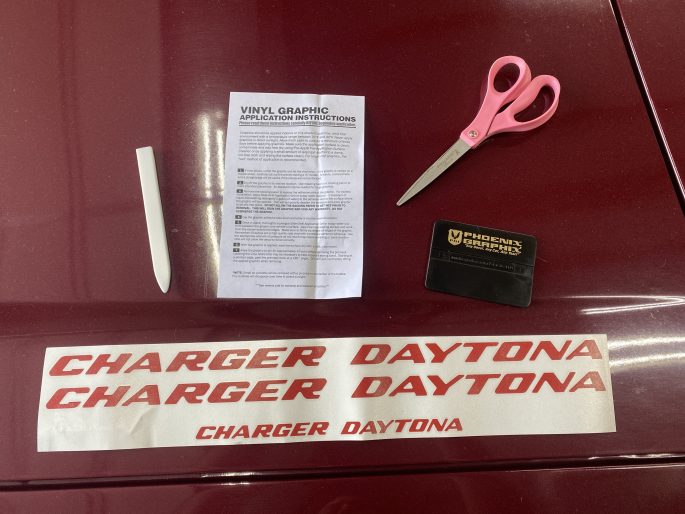 Okay, this isn’t a problem, but all the same, was something I wanted to fix. If this thing is going to be a Decal GT cruiser, then it needs to have the correct stickers. I was shocked that Phoenix Graphix actually had kits for the ’76 Charger Daytona. Happily, instead of buying the full tape stripe kit and all, I could just get the name plate stickers. 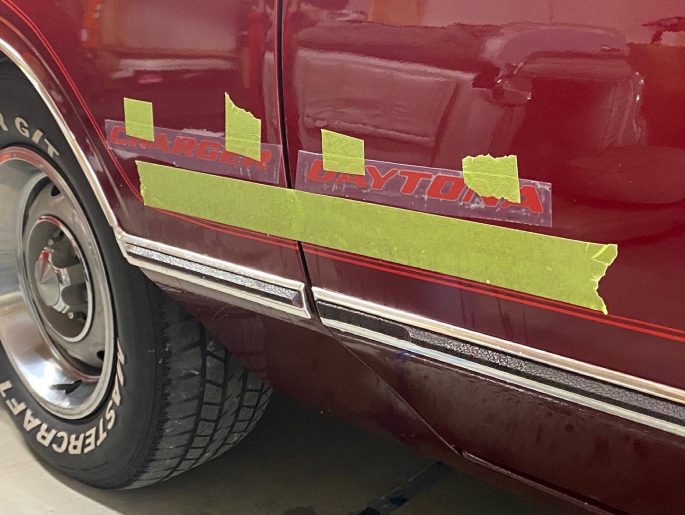 Using photos from numerous sources and a guy off of Moparts.com, I did a best-guess layout and using soapy water and the paddle that came with the kit, badged the sides of the cars appropriately. 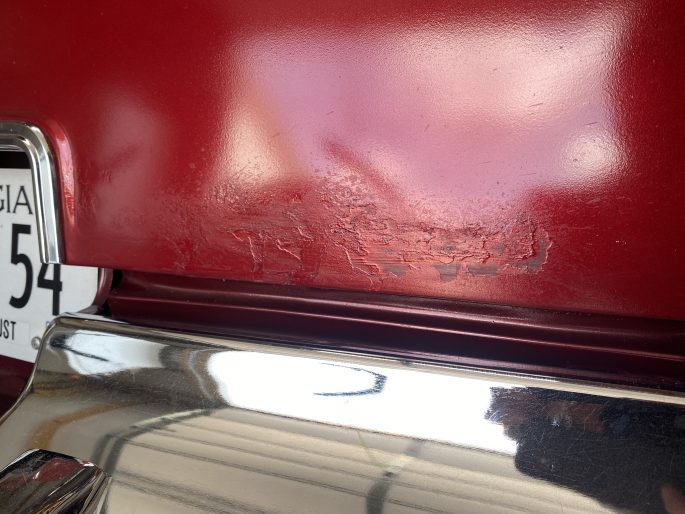 Now, to the trunk. In place of the actual name badge here were some crafted stickers made out of hologram-like material. I peeled those off, went to wipe the area down with an adhesive remover to get rid of the sticker glue…and would up with a chemical experiment gone wrong on my hands. This wasn’t hard-core stuff, this was a craft wipe, but the damage happened just the same. Those darker spots? Bare metal. 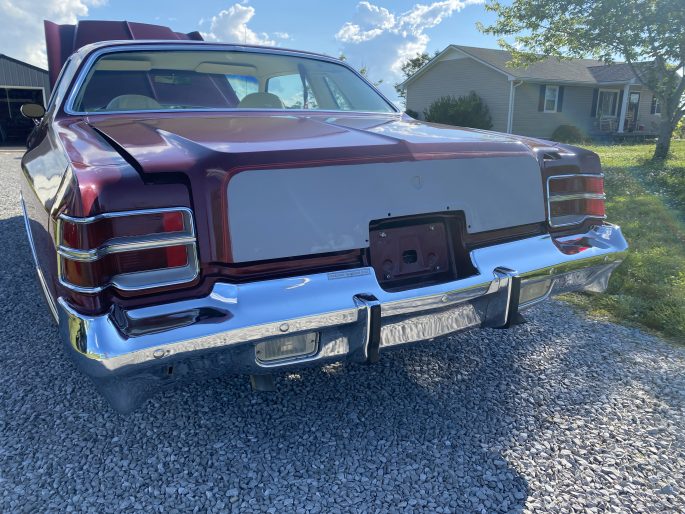 So, in my most controlled paintwork deal ever performed, I stripped most of the flat area of the trunk’s rear down to bare metal. I found a couple tiny pinholes in the usual rust point, so I treated them before skimming on some filler, then primed it. As of this article, I’m waiting for the correct MR6 Claret Red paint to come in. Once that’s here, I’ll go over the primer with the ME8 Vintage Red Sunfire Poly (read: maroon metallic), then the Claret Red, then clear it out. Once finished, then I’ll apply the last “Charger Daytona” decal and will move away from paint so that I don’t get hung up on it. 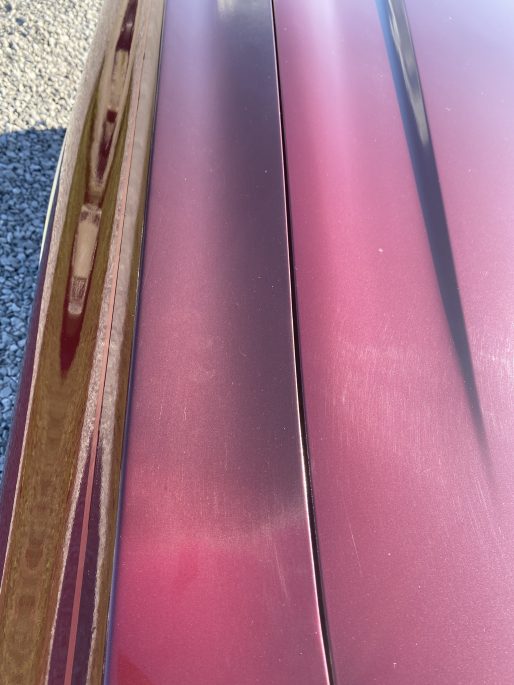 Pardon the vertical shot, but I had to get the tone of another repair section on this car. You can see where the top of the driver’s fender has been retouched. What should be Vintage Red Sunfire winds up looking like a cool coppery-bronze root beer candy color. Not bad, not worth re-doing right now, but the paint on this car is not perfect. It’s a 20-footer and could use a pro touch when I can afford it. But I’m not worried about the Charger right now, especially when the orange Mustang’s paint is actively leaving the car. 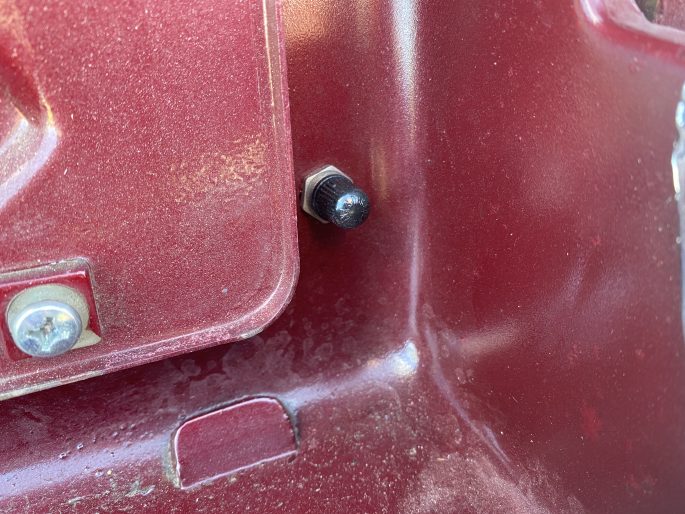 …oh, yeah. Rear air shocks are shot, from the lines to the shocks themselves. The Charger has a bit of a sagging ass issue. Looking at a good heavier shock or maybe a coiled load-assist shock for the back for an immediate fix while I flip through the Firm Feel catalog for ideas for a full suspension work-over. Those Coronet and Fury cop cars could dance for being such a big car. Maybe a police-spec Charger isn’t a bad idea! 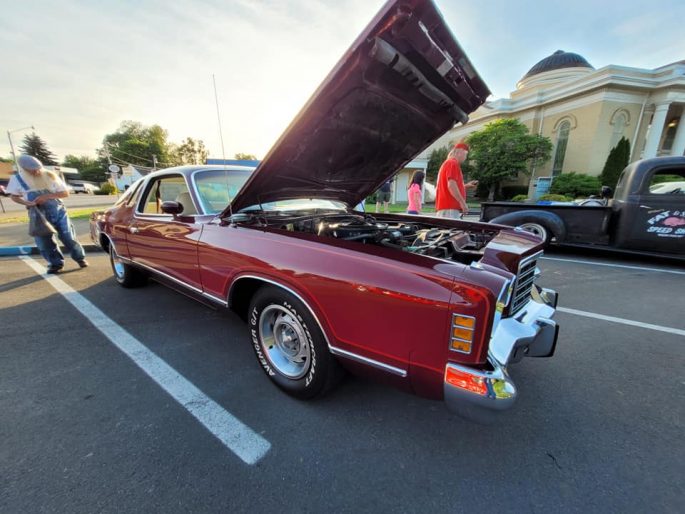 None of this is stopping us from enjoying the Charger…at least, once the paint work on the trunk is finished, anyways. There’s still a want list that includes some fatter Rallye wheels with the correct “acorn” caps and another 200 or so horsepower out of the 360, but the reality of the situation is that fun items don’t happen without money. So, we’ll enjoy it as-is this year, making small improvements, while saving up for the next good investments for the Dodge. Okay, maybe a new exhaust system…the one on the car rattles like a skeleton getting frisky on a hot tin roof once the car warms up! (Photo courtesy of whoever does the coverage of the Gathering in the Square, Franklin, Kentucky)

This 1973 Jeep J2000 Truck Sales Promotional Film Has Us Looking For A Dealer - 70s Greatness Never Meet Your Heroes: Waking Up A Super-Rusty Buick Grand National

7 thoughts on “The Charger – Honeymoon’s Over, Let’s Check Out The Bad Parts Of Our Late B-Body”