Random WTF Photo of the Week: A Burned Out Monster Truck on A Russian Sidewalk

We’re not ashamed to admit that we stumbled on this mind warp when searching for monster truck pictures to kill time. The photos were taken in downtown St. Petersburg apparently near a subway station. They aren’t new by any means, having been published years ago by EnglishRussia.com, but they are so bizarre we had to share them.

The truck is obviously a 1980s K5 Blazer. There appears to be a square tube frame under it and some big axles that the two good tires are bolted to. It also appears to have suffered from a “minor” fire. So minor that the melted remnants of the rear fiberglass top are present

Your job? Concoct the story of how the hell this truck ended up in the middle of one of the largest cities in Russia, and why it has been sitting on the side of the road for what appears to be a long time.

Hit the link below to see all the photos: 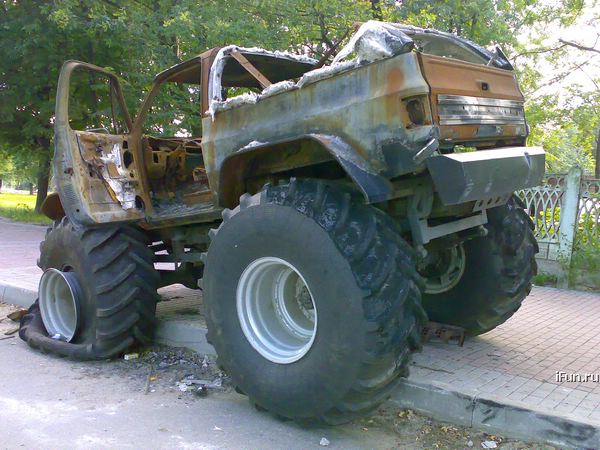 9 thoughts on “Random WTF Photo of the Week: A Burned Out Monster Truck on A Russian Sidewalk”