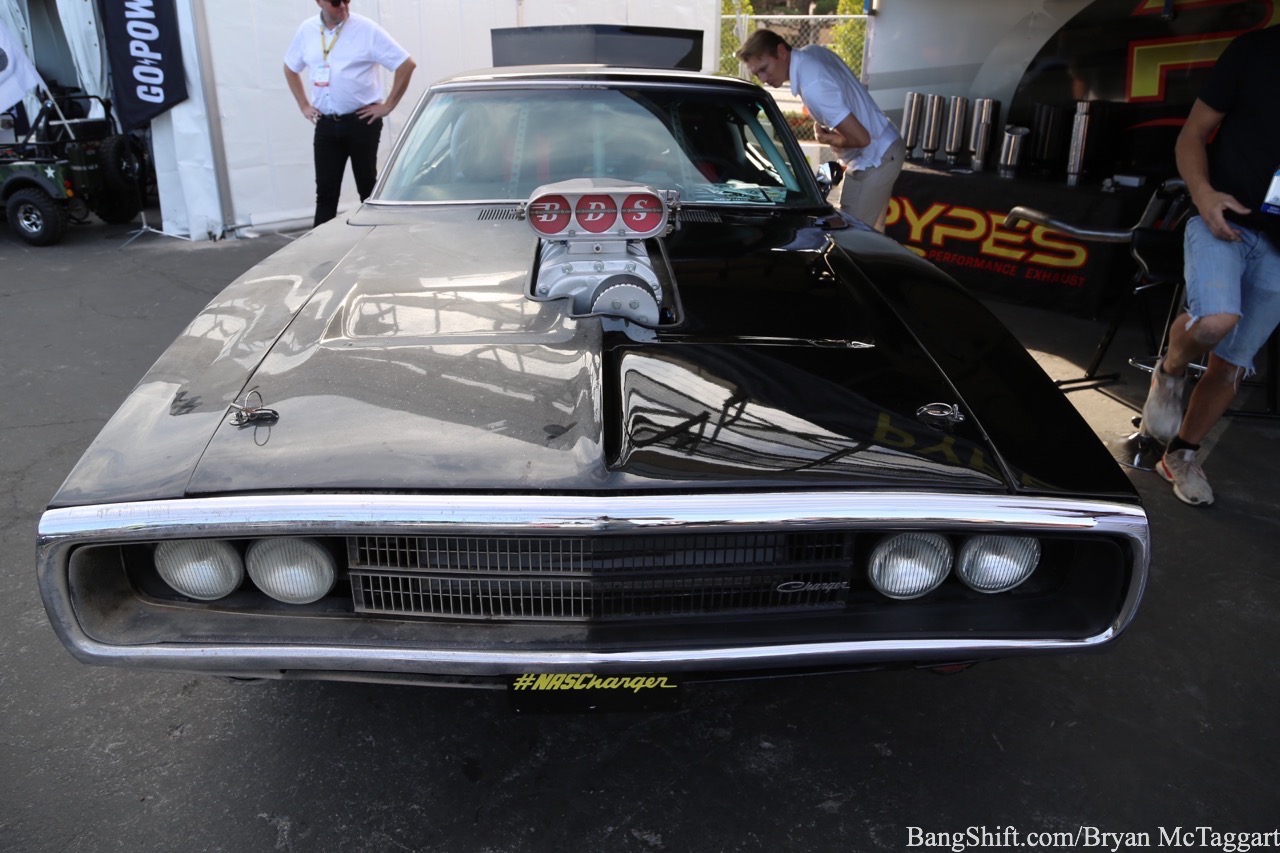 How often have we made sniping cracks at the cars of the Fast & Furious movie franchise? Often. And I can say that without including BangShift work too…until the fourth installment, I might find one or two cars of note, like the Monte Carlo in Tokyo Drift, and even after Fast and Furious (read: part four) I was still picking out favorites and mainly ignoring the rest of the story. We all knew that the Dodge Charger with a BDS blower poking through the hood was movie magic at it’s finest, courtesy of the work of Dennis McCarthy. He preferred to use a streamlined, “as many shared parts as possible” for the work cars, so it was small block Chevy crate engines for most everything unless there was a reason for there not to be one, like a hero car used for close-up shots or a car that had to have more power for what was asked of it, like the Monte Carlo’s big-cube engines. 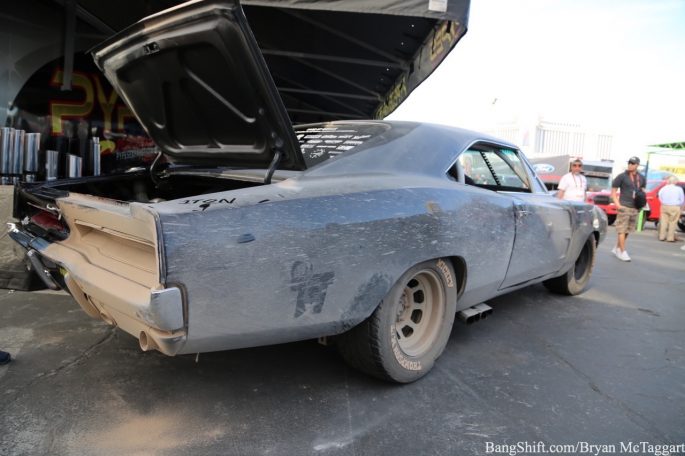 But what happened to the cars after the movie wrapped up? In the case of one, it was shipped to Europe to be a part of a traveling roadshow called “Fast & Furious Live”. If you thought the movies sucked, you should’ve seen what this was: electric-powered vehicles moving around at Power Wheels speeds, meant to emulate the movie cars on projector-backed images on a stadium floor, while telling a story of international espionage and daring-do with cars. The Guardian wrote, “It would be nice to say the worst thing about the show was the exhaust fumes that fill the venue shortly after Vin Diesel has walked off stage following his introductory speech. But the show stinks in both senses.” 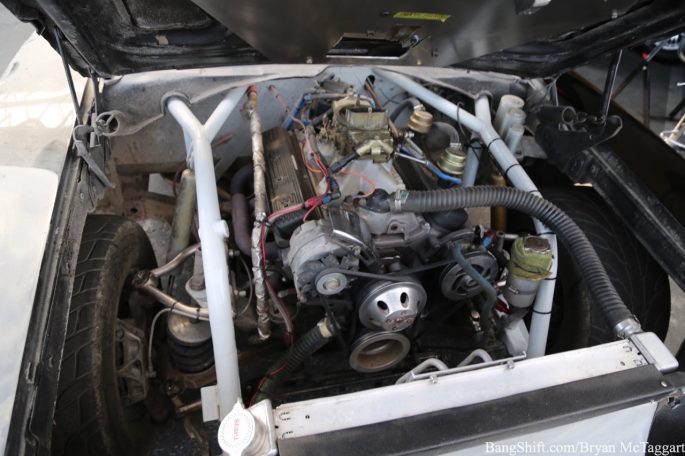 Ouch. Maybe that’s why the show went into administration earlier this year. The props and pseudo-cars were auctioned off, and that’s where the story of the NASCharger begins. Sam Hard got tipped off that there was an auction of vehicles from the show and decided to get some cash together to see what he could possibly get from the show. He was anticipating paying dearly for an actual vehicle, but he managed to score three of the vehicles for a reasonable amount: a replica of Brian’s Mitsubishi Eclipse from the first movie, a replica of the Oshkosh M977 “Mongo” carry truck from Fast Five, and then a holy grail find, a 1970 Charger like part one’s hero ride. Actually, scratch that…he got one of the actual Chargers used! After digging through the paperwork, he found out that he had a title with Universal Studios on the name line. Okaaaay…now what do you do if you are in his shoes? 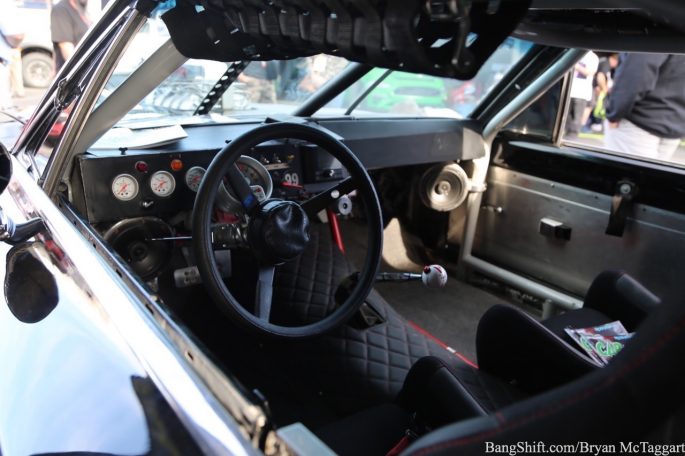 His call was more radical than even the movie franchise dared to go: he purchased a former Carl Edwards NASCAR online, cut the body off and stretched the wheelbase out seven inches to fit within the Charger’s proportions, and made a heavenly match that, fake blower or not, would be a hell of a runner. We could end the story here, that’s be enough…right? Well, not exactly. Hard wanted street-legal…so the barking side-exhaust got silencers that reduce the 358ci’s tone to cop-approving levels, and since road trips are in the cards, it’s got a thumping sound system inside too. The half-washed/half-clean look is on purpose…the car was shipped over from England to the States, trucked to the midwest, and driven the rest of the way to SEMA. And yes, the fake blower still spins with a flick of a switch. 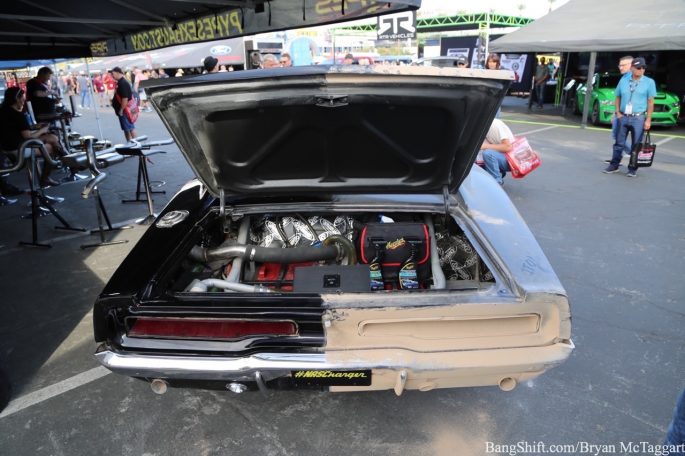 Now…a little bird told me on the way out of SEMA earlier tonight that he hadn’t heard of Power Tour. Advice: learn quickly and start booking hotel rooms. He built a bitchin’ street-legal machine, now comes the moment when it needs to get put to use!

The video below is the first installment of the build by Hard Up Garage…be sure to check it out!

Save It: This Weirdo Hot Rod Magazine Chrysler Mini-Van Is Languishing In A Washington State Wrecking Yard SEMA 2019: The New Items From Trick Flow - Chevrolet, Ford And Mopar Goodies!