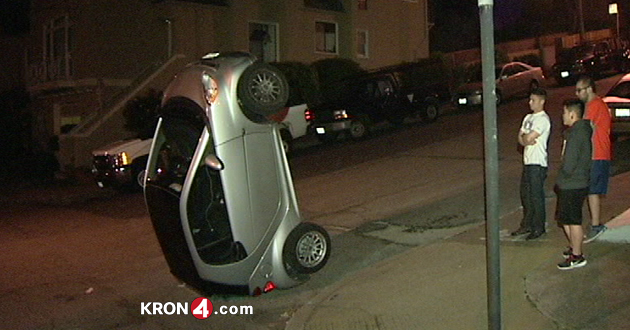 On Sunday night, a few Smart cars were flipped over, set on end, or otherwise vandalized on the means streets of San Francisco, not that big a deal right? Wrong. The incident spread like gasoline fed wildfire around the internet and was reported on at the national level. This is a huge problem for anyone that owns a smart car, especially if you live near a college campus. Why? Because we can virtually guarantee copy cat versions of the crime will be committed this weekend all over the place. All it takes is a couple of beer fueled college kids and an unfortunately parked Smart and it is game on. Like Skittles, Pringles, and rib eye steaks, you can’t have just one, so no Smart car is safe.

As you would expect, Smart cars are easy pickins’ for vandals and idiots but they’ve mostly only been defiled in Canada and abroad. This is the first time a “major” incident of Smart car flipping has been reported in the USA and we’re guaranteeing you it isn’t the last. Believe it or not, Smart cars were being flipped, carried off, and dumped into Dutch canals with such frequency, the police stopped talking about it or mentioning it to the news in an effort to stop the escalating  wave of automotive violence. We’d classify the Dutch several evolutionary levels above a muscled up and drunken 20 year old kid in an American city that is stumbling out of a bar after hours of drinking. Nothing good will come of this.

If we owned a Smart car (we’re laughing hysterically at the mere prospect) we’d probably go into sales mode right now before this whole Smart tippin’ thing becomes a national pastime and with warmer weather allowing people more mobility outside, it is going to.  What can you do to stop vandals from flipping your Smart? You can’t do a damned thing but you can make sure all of your loose change is removed from the cup holders and you can make sure no one can actually sees your car. Park it next to a Cushman truck and tell everyone it is an Escalade, chain it to a lamp post, or fill the tires with concrete….that’s about it. You’re boned.

The Smart assault the other day took place in San Francisco and in typical San Fran-ease, one of the victims talked about the whole experience. The best part of this quote is that the speaker was watching an old man’s car and moved it out of a safe spot to the corner to allow a larger car to park. Her husband apparently told her that was a bad idea. Imagine being that guy? You have the ultimate, “I told you so,” to use for the rest of your lives.

Here’s a quote we found from this specific incident

“He was proud that at age 70 he was driving it around. He felt real progressive in it,” Orner said. “Although, I don’t know if anyone wants to buy a Smart car now after what happened.”

Gallivan said she moved the car from in front of her house to a nearby corner — despite her husband’s reservations — to allow a bigger car to move into the space.

She hopes the vandalism isn’t the start of a new trend.

“It’s a bummer. I’m sure hoping it’s just a prank and not those who are trying to make a bigger statement in regards to the gentrification in the city,” Gallivan said.

Yeah, that’s the ticket. This was done to make a”bigger statement in regards to the gentrification in the city.” Or it was a frat initiation. You know. Either one.

2014 Lonestar Round Up - Our Wall To Wall Coverage Continues Unknown Parts Counter Guy: Why The Feng Shui Of A Parts Store Is Enough To Make A Man Drink...Heavily