Proud BangShift sponsor Jet Hot has announced that they will be sponsoring the autocross events to be held at the upcoming Chevy High Performance Nationals at Atlanta Dragway in Commerce, Georgia. The event will be happening from June 1-3 and there will be drag racing, a car show, and corner carving all happening at the same time in a massive celebration of Chevy power! The event is also part of the LSx Challenge series put on by Chevrolet Performance, so the racing action will be hot and heavy on the strip.

Jet Hot isn’t just a company that throws some dough at an event to get their name on it, we’re 100% sure that they will be thrashing on their stuff at Commerce. We’ve seen Cheryl Herrick hammering the company’s LS-powered Chevy Malibu at events like the American Street Car Series Run to the Shore and others. They’re as deep into this stuff as the rest of us!

Read the announcement below to learn more about Jet Hot’s sponsorship of the autocross action at the Chevy High Performance.

ALSO – STAY TUNED FOR A SPECIAL BS ANNOUNCEMENT ABOUT THIS EVENT COMING LATER THIS WEEK!

Santa Ana, CA—Jet-Hot Coatings is proudly sponsoring the Autocross events at Chevy High Performance Nationals June 1-3, 2012 at Atlanta Dragway located in Commerce, GA. An autocross event challenges a driver’s dexterity and skills as he or she competes against the clock. Also pushed hard is a vehicle’s steering and braking systems as well as durability, which is where Jet-Hot comes into the picture. CHP Editor, Henry De Los Santos, shared with us, “I’m excited to have Jet-Hot High Performance Coatings’ to come onboard as the Chevy High Nationals Autocross sponsor. Jet-Hot is known as the go-to company for exhaust, engine, and drivetrain coatings and many of our reader’s are well versed in how effective the coatings help to improve performance while reducing under-hood temperatures.” Cheryl Herrick of Jet-Hot carries the same sentiments about the benefits of using Jet-Hot in the adverse world of autocross competition. She says, “to improve performance on the track or the street choose Jet-Hot, the oldest brand in the industry for thermal management, corrosion protection and friction reduction coatings.”

The Jet-Hot Autocross course will be setup in the pit area in order to accommodate a technically challenging course. Atlanta Dragway is well versed in hosting an autocross event as it has done so on many occasions since opening in 1975. The facility is very spacious and home to the NHRA Southern Nationals, one of the most popular stops on the NHRA Full Throttle Drag Racing tour. There are 7 distinct categories for your GM vehicle to fit—Modern Muscle (1993-Present), Street Machine (1973-1992), Muscle Machine (1955-1972), Street Rod (1954-Older), Truck (any vehicle registered as a truck regardless of year), Turn and Burn, and Pro. There will be over 30 awards given away to the participants including each category champion. All competitors are welcome from beginners to advanced. As an added bonus the CHP Nationals is host to the Street Machine Challenge Invitational. Competitors and fans can get up close and personal with leading Pro Touring cars and drivers as they compete in the magazine shootout. Please visit www.CHPNationals.com for more information on the Jet-Hot Autocross and other festivities in this jam-packed GM event June 1-3, 2012 at Atlanta Dragway. 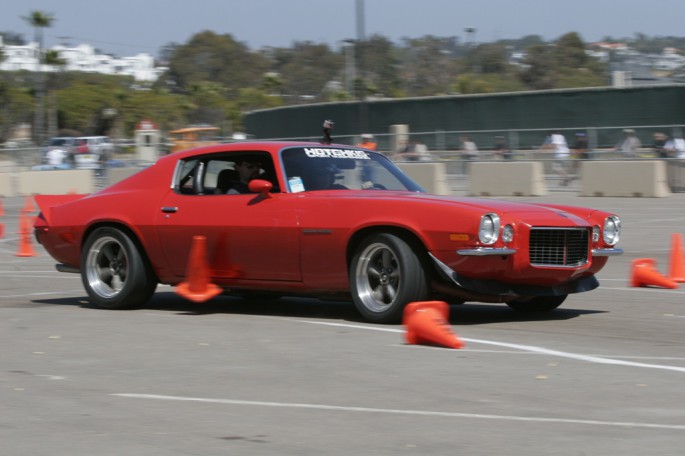