Stupid Gearhead Storytime: Doing The Most With The Least At The Junkyard! 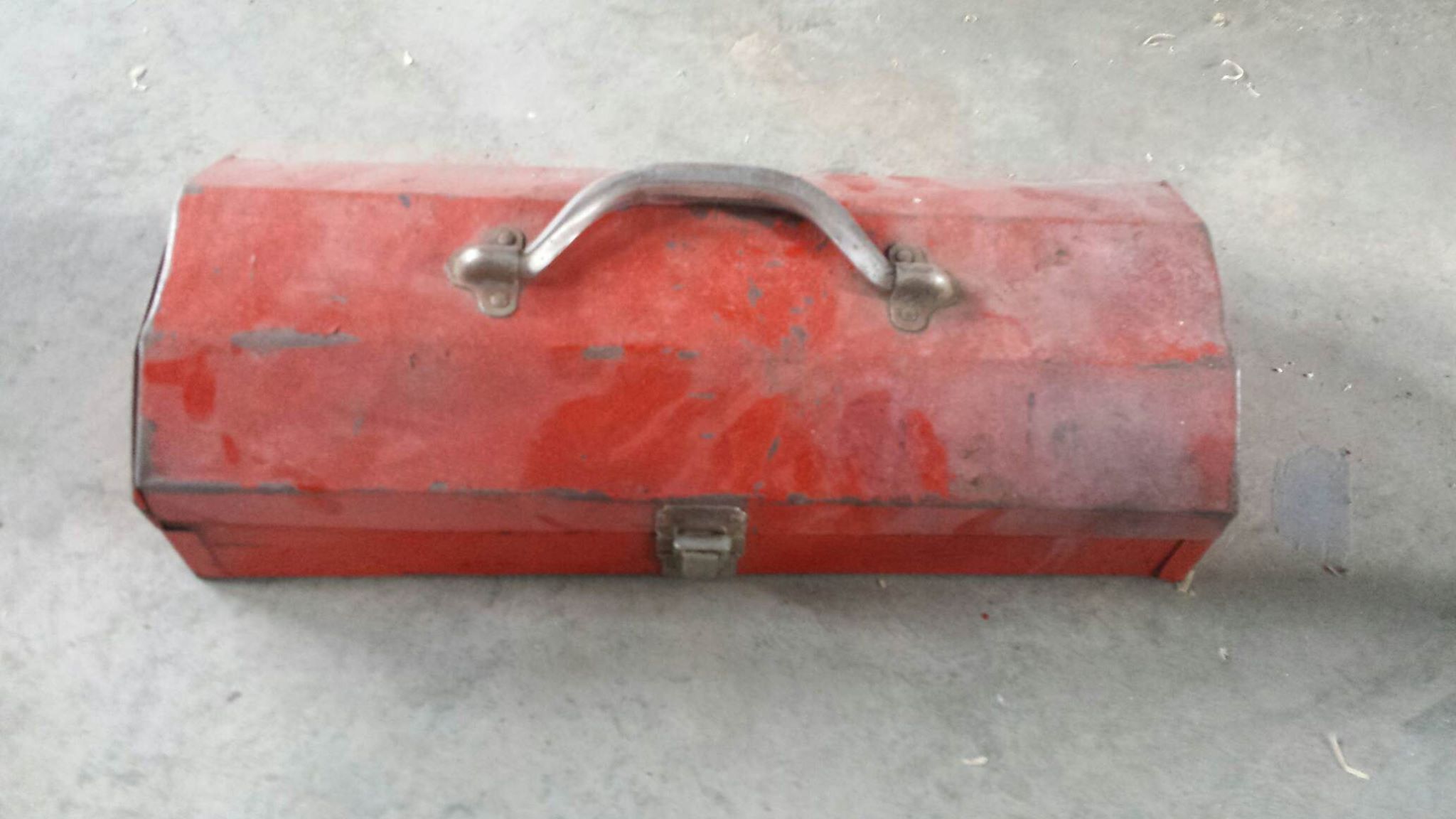 With all the “social distancing” and “stay-at-homing” going on right now, some of us have been fortunate enough to have been given a time out from the typical daily rat race. While stuck at home, one of my favorite activities so far, and I know it sounds crazy, is to just sit and think about the good times. And since I’m a gearhead, the mind usually defaults to thinking about some of the wackiest, stupidest, and BangShiftiest feats I’ve pulled off in my time living on this rock. For some reason, my mind recently wandered back to the year 2001, on New Years Eve. A few beers into the night, I busted out the weekly Want Advertiser (the precursor to Craigslist and Facebook Marketplace in print form) and stumbled upon an ad that set off a chain of events that somehow ended up with two friends and I pulling off a seemingly impossible feat at our local junkyard: pulling a rear axle with almost no tools. So sit back, grab your beverage of choice, and read on to see a story of pure stupidity and impressive resourcefulness!

A bunch of friends and I got together to party, as you typically do as a twentysomething college kid, and I stupidly brought along the latest edition of the Want Advertiser classified magazine to peruse. 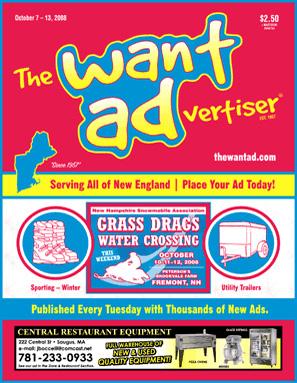 Hey, remember these? Before Craigslist and other online local classified marketplaces blew up, there were weekly classified books like this all over the country. Every Tuesday, this thing was published and sold in convenience stores across the region. I religiously bought one every week to scour for deals on all sorts of stuff, but especially for cars and auto parts. Even with the instantaneous ability to pull up a search for whatever you need right on your smartphone, I still miss flipping through the black and white pages of this book every week, squinting at the tiny text as I hunted for bargains on all sorts of stuff.

A few beers in, I opened the book and started scouring the ads for deals. And then I found one: a 1983 Camaro Z28 with the description “5-speed, T-Tops, mostly there, doesn’t run” for $300. I had been looking for a project car for months, and the $300 fit my poor college kid budget perfectly, so I circled it and kept partying for the rest of the night, bench racing away with my friends and imagining myself cruising the local beach strip with the T-Tops off and Dokken blaring out of the ERS sound system, pretending like it’s 1985. The next day, I called the number, set up a deal to go grab it, and then set off to figure out the logistics.

So, how would I get a non-running car from the end of Cape Cod, MA to my house in the Boston area? My dad had two trucks at the time: a generally unreliable (and rusty) 1992 Ford F150 Flareside, and a company-provided 2001 Dodge Ram 1500 that was off-limits for towing. Then, I started going down the friend list, and noted that my friend Pat had a sweet 1988 Dodge Ramcharger 4×4 with a 360 V8 and a 4-speed manual transmission that he recently purchased. 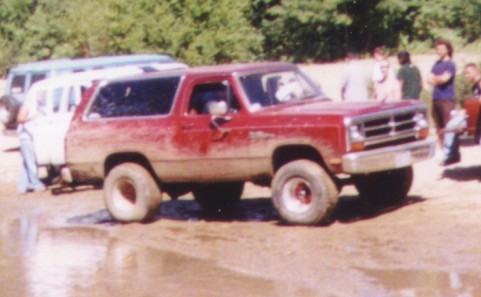 Here’s Pat’s Ramcharger in all its muddy Mopar glory. This truck was an absolute blast to cruise around in. Back then, cruising was a favorite pastime, and we all took turns driving our cars. It was always a treat when it was Pat’s turn, because this thing was a BEAST. He sold it years ago, and even though he has a fleet of other cool stuff, he regrets that all the time.

After talking to Pat, he was game for going down to grab the Camaro. He was curious on how well the Ramcharger would tow, and this would provide the perfect opportunity to find out. The next day, we rented a trailer and pointed that Ram’s Head hood ornament eastbound and down! 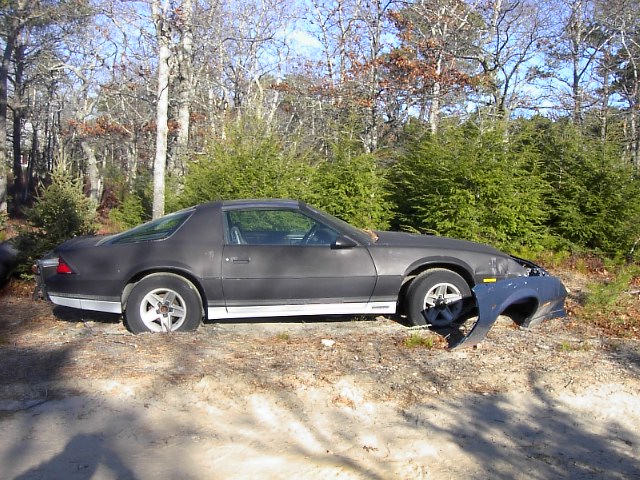 This is the actual $300 Camaro, in question, as found on the seller’s property in Orleans, MA. The paint was completely oxidized, it didn’t run at all, the front passenger fender was crunched, the front bumper was cracked, and there were some trim parts missing. But it came with some good fenders and an IROC bumper, it had the rare composite hood and a stick, and the body was largely rust free, For $300, it was a no-brainer! Due to title issues (they lost it and wouldn’t help get a new one), my daily driver getting wrecked, and the arrival of a 1979 Trans Am, I ended up selling it. I still want another one. Side note: once I did get it running, the experience was brief. It had the most broken-sounding 305 I have ever heard that still somehow maintained a steady idle. It sounded like there were ball bearings rattling around the crankcase!

After liberating it from its resting place, we loaded it up on the rented trailer and headed back up north. Around town, Pat noted that the Ramcharger felt like it was lagging a bit, and by the time we crossed the Bourne Bridge over the Cape Cod Canal, we could all hear some strange noises coming from the back of the truck. After we dropped off the car and trailer, it was apparent that our little adventure destroyed the stock rear end in the Ramcharger.

I felt terrible about it, and offered to help him fix it. He was planning on upgrading the rear end anyway, so he mulled his options and figured out that certain Ramchargers optioned the right way had a Chrysler 9.25″ limited slip differential rear end with the correct ratio he needed to match his truck. And you know what? Our favorite local junkyard, Everett’s Auto Parts, had one of those EXACT trucks in the yard. Talk about a stroke of luck! 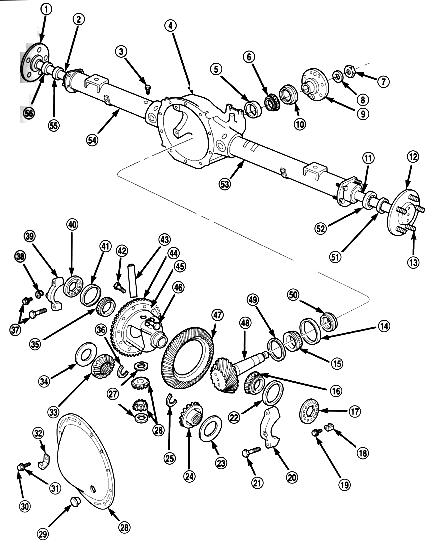 While I can’t remember what rear end the Ramcharger originally had (8 3/4″ maybe?) the bearings were completely shot. A common upgrade is the venerable Chrysler 9.25″ that came in a lot of heavy duty applications from the Muscle Car Era up until modern times. Project Power Laggin’ could use one of these at some point!

After recruiting another friend, Greg, our raiding party was complete. That weekend, Pat picked us up in his mom’s Caravan and off we went to the yard. One thing I noted is that Pat didn’t really bring a lot of tools. Every time I went, I brought a tool box or bag full of stuff, and Greg usually did the same. I was envisioning needing a bunch of stuff, like a cordless sawzall, a floor jack, and more. The only tools I saw in the back of the van was Pat’s tiny little red toolbox. Pat assured us that everything we needed was in that box. 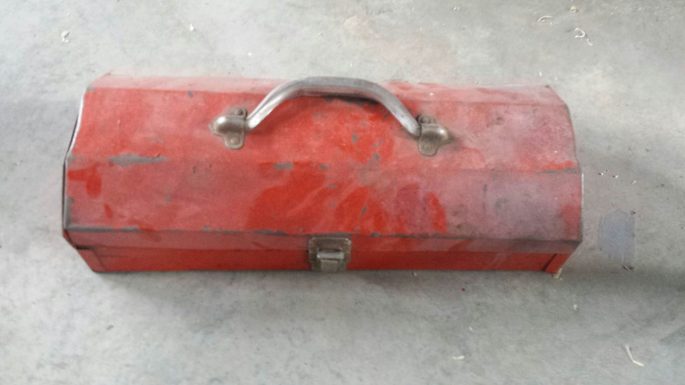 I’d be willing to bet that a lot of you had a small toolbox just like this at one point in your lives. This is Pat’s actual little red toolbox, or what he calls “The Junkyard Box”. Although it’s worn off over the years, he did at one point have a Chrysler 9.25″ bolt pattern and some measurements scrawled in Sharpie on the top of the box for quick junkyard reference!

When we got to Everett’s, we walked up to the parts counter and inquired about the rear end. “Yeah, it’s out there, in the back. $150 if we pull it, $100 if you do.” Pat then opted for the “we pull it” option, and placed the little red box on the counter. “With WHAT?” the guy asked, to which Pat responded, “I’ve got everything I need right here”. The guy started laughing, and called over another counter guy to tell him what was going on. The guy then said, “If you guys can pull that off with whatever’s in that box, we’ll do $80. Betcha can’t!”

Speaking of junkyard challenges, does anyone remember the TV show Junkyard Wars? 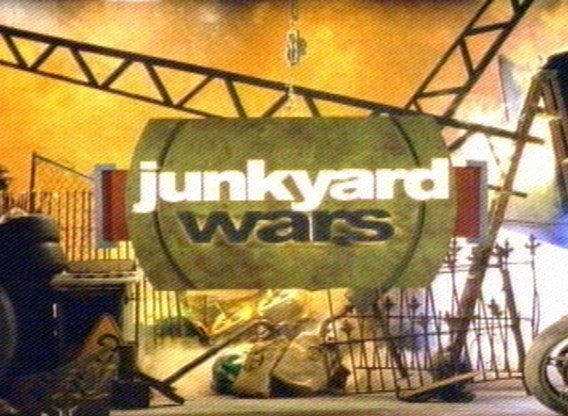 If not, let me give you a rundown of what it was: two teams compete to build some sort of vehicle or device from parts laying around in a junkyard. There’s a time limit, and they are limited to whatever they can scavenge out in the yard. It was a cool concept, and we were obsessed with it, usually watching at Pat’s house. Man, we wanted to do something like that someday. That day had arrived, and Pat was ready. He had spec’ed out a handful of sockets fitting every bolt he needed to remove by practicing on his own truck, and packed a small hacksaw and some pliers as well for the cables and lines. We scavenged for a few scissor jacks to get the rear end up off the ground, and got the rear end out in minutes. The three of us brought it up to the desk, and the counter guy’s eyes nearly left his skull! If I remember correctly, he knocked another $5 off making it only $75! Victory was ours!

That rear end was rebuilt, painted, and installed soon after that, and of course, it had to be tested out. 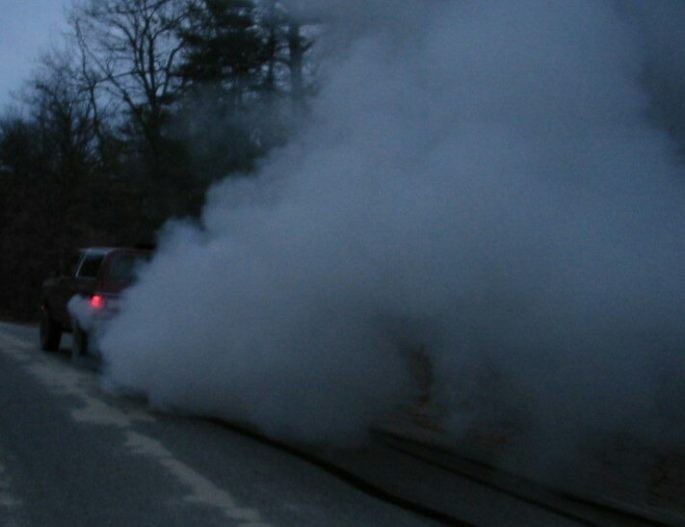 So yeah, I think it worked. To this day, nothing has topped this Ramcharger in my book for doing burnouts.

Thinking back, this was likely the first time I was involved in a crazy automotive project and/or scheme. Sure, I had done my fair share of wrenching since my go-kart and minibike days, and we had some crazy times involving cars, but this was the very first time I helped pull off a seemingly impossible task for unabashed gearhead glory. I learned a lot of lessons here, from making sure you have a good tow vehicle available if you plan on snagging a project car, to learning how to pack lightly and efficiently for junkyard trips, especially ones where your sole purpose is to extract one specific part. It was pretty cool to be able to pull the whole thing off successfully, and it set us up for a future of pulling off all sorts of automotive feats, which we still do today.

I’m sure some of you have pulled off some crazy feats in your time, right? We want to hear about them! Post ’em up in the comments section below!

Chrysler Suspension Setup With Uncle Tony! Here's His Recipe For Making A Mopar Move Out! Delayed: ECTA's April 2020 Event - COVID-19 Claims Another One

7 thoughts on “Stupid Gearhead Storytime: Doing The Most With The Least At The Junkyard!”