Does Twisting A Ratchet Strap Make It Weaker? It Makes Them Quieter, But Is That Worth It? 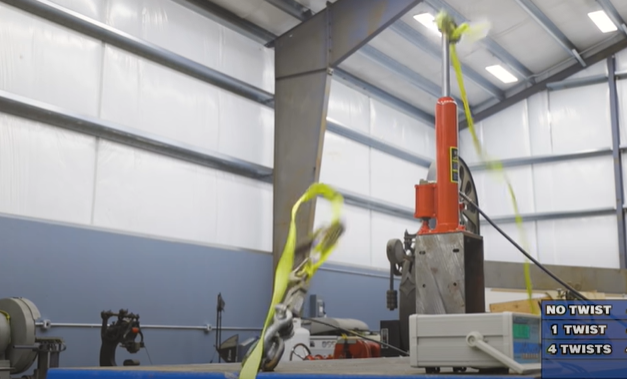 If you have no idea what we’re talking about, then you probably haven’t used ratchet straps very much, and absolutely do not pay any attention to the big rigs going down the freeway. It is common to see the big yellow straps on lowboy and flatbed big rig trailers holding down all kinds of cargo. These straps are capable of holding tens of thousands of pounds of cargo safely on a big trailer to be hauled all the way across the country. Sometimes you see them with a half or single twist in them, and other times you see them with no twist and see them vibrating or flopping a little. With no twist in them they sometimes act like a wing and start to oscillate, so it’s common to put a half a twist in them to stop it. But does the twist make them weaker?

Recently Jason from Fireball Tools loaded some equipment on a trailer during one of his videos and put a half twist in each strap. Some folks lost their minds in the comments and said that the strap was half as strong with the twist in it.  As usual, people online were immediately experts on all things straps, even if most of them had no clue what they were talking about. So what did Jason do? He used science to actually test the straps in all kinds of conditions to see what the effects of twisting really are. You’ll want to watch this video, because it is pretty entertaining.

DANGER: Stop Installing Harmonic Balancers The Wrong Way! Doug And Chad Both Tell You The Why's And How's! Everyone Loves A Stout 505 on 5/05, right? Pontiac, Chevy, and Chrysler Thumper Videos Here!

One thought on “Does Twisting A Ratchet Strap Make It Weaker? It Makes Them Quieter, But Is That Worth It?”