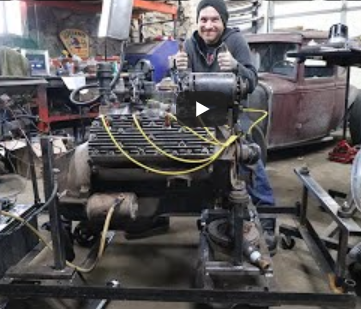 When you watch this video not only will you appreciate the upgrades going into the Flathead Ford V8, but also Matt’s attitude toward what should be done to it. Because this engine is going into the 1939 Mercury, which is a full fendered car with a hood, that is never going to be a show car, there isn’t going to be a lot of times where it’s sitting with the hood open for people to see this engine. With that in mind, using a bunch of rare speed parts that people will want to see would be a waste on this thing. Instead Matt is going for parts that will help with more power but still be a fun and drivable combo. Check it out.

In the last update on the 1939 Mercury Coupe, Matt spent wayyy to much time trying to get the engine broken free. We have given up on that plan and have pulled what we thought to be a good candidate for swap. This 1941 Ford flathead appeared to be extremely clean, and it had an oil pressure gauge installed into the block. After putting the engine onto the run stand we had it running in a matter of less then an hour. Nothing quite like taking a perfectly good running engine and pulling it apart!! Time for a Winfield Cam, Fenton Heads and Intake, and a pair of Stromberg Carbs!! Hopefully we can make this thing run!!!