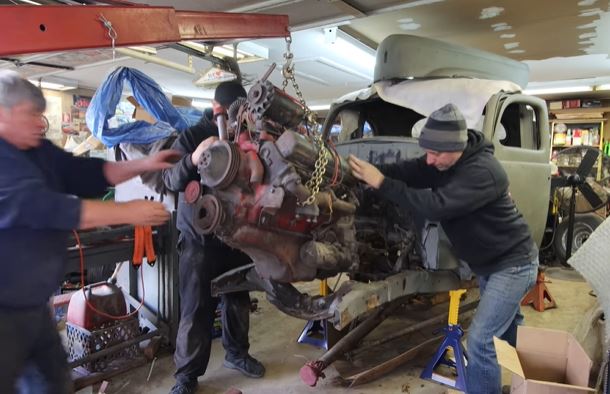 When you are driving home from gathering up more vintage car parts, and you have room in the truck, you stop to see if you can collect more parts! When a viewer hit up Matt and the crew at Iron Trap to tell them about some stuff he had available they just had to stop to see if they could fill up the remaining space in the truck. I mean it’s the right thing to do, don’t you think?

One of our viewers Terry reached out to us about his fathers 1940 Ford, and if we would like to purchase some parts he is removing. Since we are headed home from West Virginia, and Matt’s truck is empty we decided to stop in. Terry’s father 40 Coupe has an Olds rocket power plant with the stock side shift trans and a Columbia two speed rear. The Olds apparently has a full race cam, adjustable rockers, and was bored out a decent amount. Terry is redoing the car to more of his own style and does not need a majority of the suspension and the engine and trans. There are also two Ford Y-Block engines calling our friend Jason’s name. Who knows what else we will find hunting around the property!

This Ultra Clean Big Block, 3/4 Ton Custom Deluxe Suburban Is Rust Free, Ultra Cool, And Up For Auction! Here's Our Final Gallery Of Photos From The Mid-Atlantic Indoor Nationals!