Testing Shocks Through The Whoops At 115mph: Ken Block Testing His Trophy Truck With Lots Of Slow Motion Video! 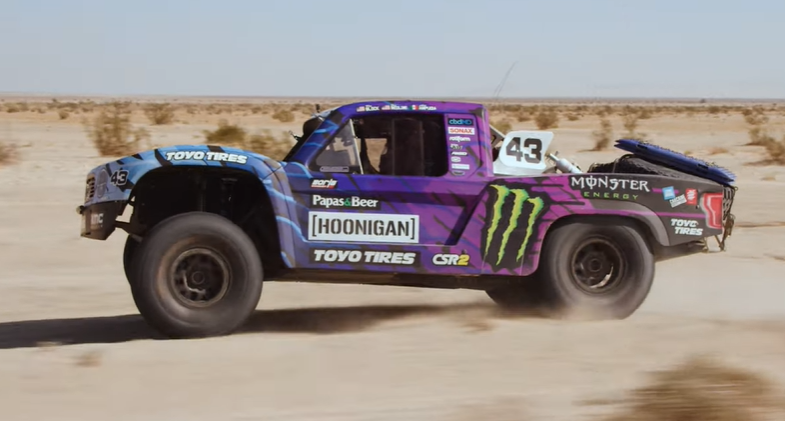 The big boy whoops in Plaster City California are the biggest and baddest in the country, and are usually worse than what racers will find in Baja Mexico when they go for the BAJA 1000, 500, etc. So many teams do their testing in Plaster City, which is just a stone’s throw from the Mexico border and has easy to access terrain that is great for testing. Besides having terrain that is great for putting the trucks through their paces, there is one other awesome thing about Plaster City, and that is the fact that the road runs right alongside the best whoops section so you can drive a street vehicle beside the race truck for great filming. Of course it’s Ken Block so they use a full on camera car and a helicopter, but we’ve been there to shoot before with far less fancy stuff and still got amazing footage. Plus it’s just a fun place to go wheeling! Check out the testing video below. You’ll dig it.

Trophy Trucks need to handle some of the most extreme terrain and high speed abuse of any racing racing vehicle on the planet. The suspension set up plays a MASSIVE role in the effectiveness and performance in these trucks. In this episode, we are back in Plaster City, CA to do some shock testing with King Shocks. To aid in our R&D (and because its sick AF) we brought out some high speed cameras, and a shot over gimbal system mounted to a Ford Raptor. This way, you can see all of the suspension articulation and functionality of this truck in slow motion.

Puddin's New Project: ABANDONED 1983 Mazda B2000! WILL IT RUN?!? ((CHEAP Minitruck Project)). Radical Overkill Or Just Enough: This Sorted R32 Skyline Takes On The Most Fearsome Time-Attack Corvette Around