Wanna Build Your Own Carbon Fiber Roof? Watch These Guys Do It To A 1977 Toyota. You Can Do This Too! 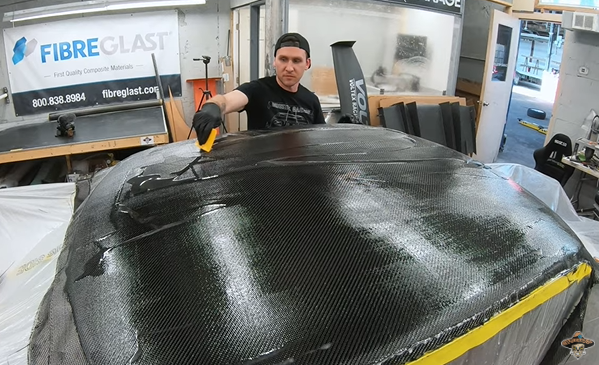 It used to be that having fiberglass body parts on your car meant it was a real race car. It still does at some level, but if you want to be a real bad ass then you get stuff made from Carbon Fiber. It isn’t cheap, but it certainly is the lightest and strongest composite for making body parts. But what if they don’t make parts for your particular car? Or if you want a roof made of carbon, what do you do? The answer is you take it into your own hands and build one from scratch!

It seems like building a roof for your car, out of carbon fiber, would be a crazy hard and daunting task. But the truth is the actual process is pretty straight forward and arguably much easier than building some kind of body panel that has body lines and such in it. Even though it is big, the roof is way easier than doing fenders for example. Think about it, it’s just a big slight curve, rather than something that has a wheel opening, flare, flush mount trim or vents, etc. It might be big, but a carbon fiber roof is usually something you can do easier than many other body parts.

Check out the video, and listen to all the questions that they answer in it.

American Alternative: Reflect On The AMC Pacer, The Car That Tried It's Best Checks And Balances: Now The YouTubers Are Checking On Each Other's Projects!

2 thoughts on “Wanna Build Your Own Carbon Fiber Roof? Watch These Guys Do It To A 1977 Toyota. You Can Do This Too!”