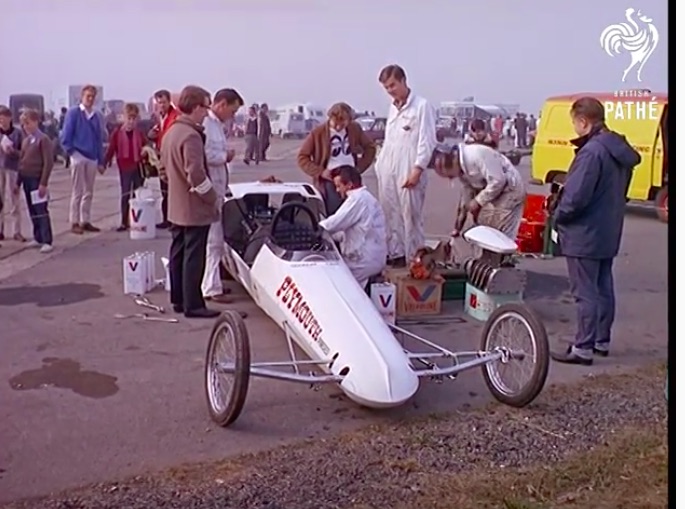 This incredible video, made somewhere around September 19 or October 4, 1964 shows the action at either the or the last stop on the first ever British International Drag Festival tour. This monumental event in the history of British motorsport was arranged by Sydney Allard, the founding father of British drag racing and backed by Wally Parks who gathered the talent in the form of an American all-star team of competitors to show an eager British public about just how fun a day at the drags could be. The first and last of the of six meetings spread around the country happened at Blackbushe and this is where the video comes from.

Before we go any further, a huge thanks to Bret Kepner for the tip on this!

The crow is insane. Check out the people at ground level and then in a few shots you can see the monstrous grandstand that was erected down track to hold people as well. This was not just a group of greasy racers taking a trip across the ocean. These guys were freaking rockstars and likely did not even know how big this would be before they got there.

So who was on the team? Get a load of this.

The British International Drag Festival would become a regular thing through the 1960s and the Americans that raced in England loved the experience as much as the people who came out to watch. The influence of these shows helped set the course for a rapid growth period for British Drag racing and that’s the best part of the whole story. Through it all, despite pressures from all sides, British drag racers have hung tough and compete strongly today.

Press play to watch this incredible video from the International Drag Fest!

A Good Once-Over: Checking Out The Super-Patriotic And Super-Sketchy Chevelle "I'm Not Asking, I'm Opening": Summit Motorsports Park Will Have A 2020 Season