BangShift Top 11: Decal GT, Round Two! More All Show, Not Much Go From The Seventies! 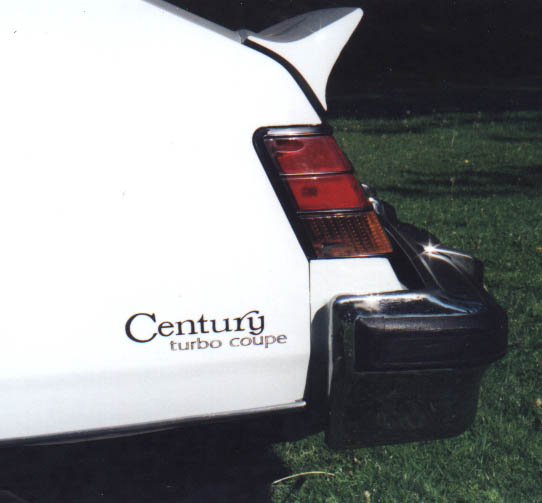 I’ll crack my knuckles, sit down in the chair, and proceed to once again embrace the weirdness that I will be remembered for. I grew up with everyone owning cars that had visual punch, but might not have had the oats to back it up. There is a term for cars like this: “Decal GT”…in essence, during the low point of the 1970s, manufacturers who wanted to keep a sporty kick replaced horsepower with showmanship and usually, that came in the form of a tape-stripe appearance package that was meant to emulate the wild themes of cars five or ten years prior, but with the smogged engines and low outputs of the current day. Visually, some of these are out of the park. Most of these ran horsepower numbers, in the corrected SAE form, that are just plain embarassing. The beauty of most of these choices is that kicking the performance potential up to something worth reading about isn’t that difficult to do, even if you stayed within the EPA’s emissions goals. With that in mind, here’s another eleven choices that you either forgot about or wish you could forget about! 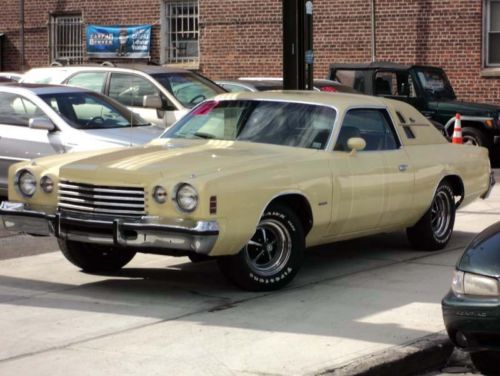 Dodge didn’t actually sticker up the Midnight Charger. To their credit, they went straight towards body modification, but in a manner that is worthy of a place here on the list. The nose clip is meant to emulate an old Cord, the vinyl top grew a bar that bisected the opera window and flying buttresses for the rear glass, and the taillights had three segments instead of two. The available 360 and big-block might ease some of that pain, but you’re still driving a car that should be getting scrubbed down to Rose Royce. Disco-riffic! 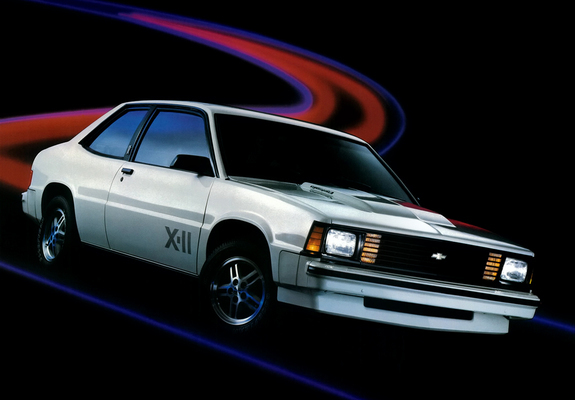 The Citation X-11 earns it’s spot on this list because it’s execution is so 1970s bad that it’s warranted. The X-body was GM’s attempt at striking back at imports, and prior to launch, they looked like a shoe-in: handsome styling, great downsizing over the RWD X-cars, and a range of engines that ran the gamut from economical to sporty. What happened was GM’s typical beta-testing with consumers…this entire platform soured a generation on American cars due to rust, non-existant quality control, and random things just breaking off. 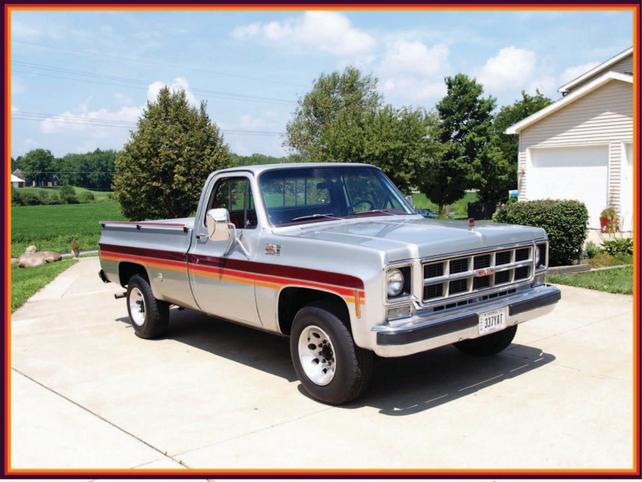 The only real downside to the Sarge is that finding one will be like finding a needle in a hay field. Based on the GMC 3/4 ton pickup and available in two or four-wheel-drive, the 1970s cheesiness is kept to a minimum…graphics that are actually pretty neat, those aluminum wheels pictured were standard with white-letter tires, as was an AM/FM/8-track/CB system and a leather-wrapped steering wheel. How many of these still exist? Not many, we’d wager. 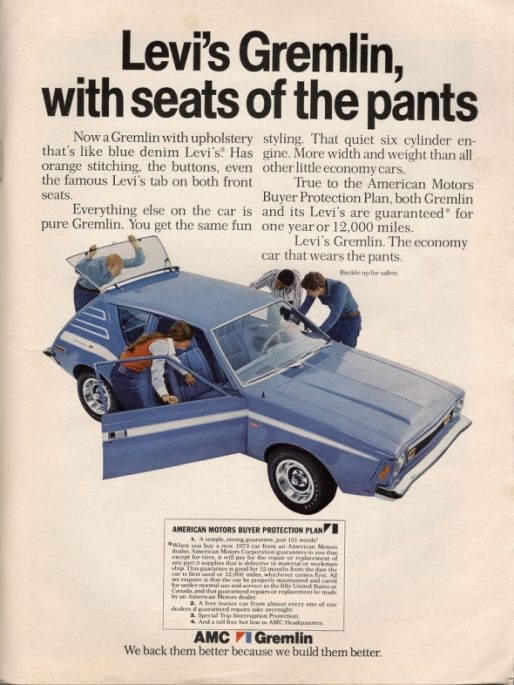 This isn’t so much one particular vehicle, but a thing. AMC paired off with several fashion deals in order to hustle out cars…Pierre Cardin for Javelins, for example, carried a wild black and multi-purple interior pattern that could only come from the early 1970s. But then, how about something as rugged, stylish and everyday as a good pair of jeans? AMC and Levi’s paired off on several models, including the Gremlin, Hornet, and Jeeps for years. 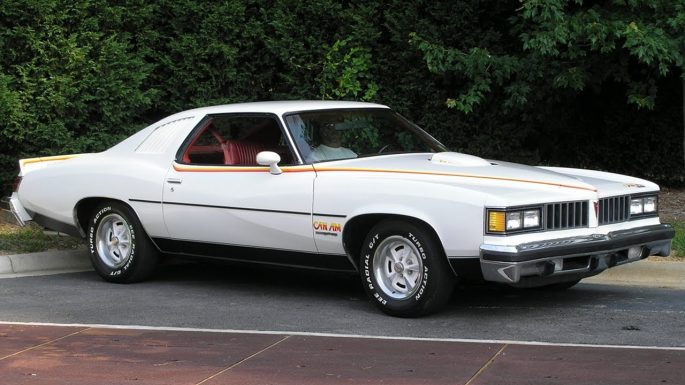 The Pontiac Can-Am is a heartbreaker, because it proved that not all hope was lost within the Excitement Division. Jim Wagners wanted a GTO Judge for the 1970s, Pontiac brass were busy having mood swings between muscle cars and super-stuffy luxo-barges. Somehow, nearly 1,400 Can-Ams, complete with either a 400 Pontiac or 403 Olds for power, made it out of the door and into the hands of gearheads before the spoiler mold broke, ending the project. 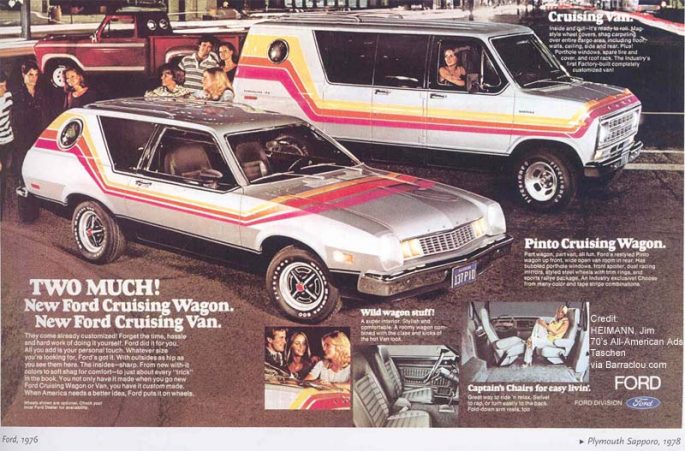 Classify the 1970s with one word: VANS. Rolling bordellos. Mobile hot-boxes. Party wagons. Sin bins. Wild paint, mag wheels, and if you had custom bits, all the better. Let’s mix in another 1970s stereotype: the Ford Pinto, one of the most derided subcompacts to ever come out of Detroit. Take the two-door wagon, plug in porthole windows, add on a stripe kit and next thing you know, you’ll be doing just fine with the ladies when you roll into the local Herfy’s. 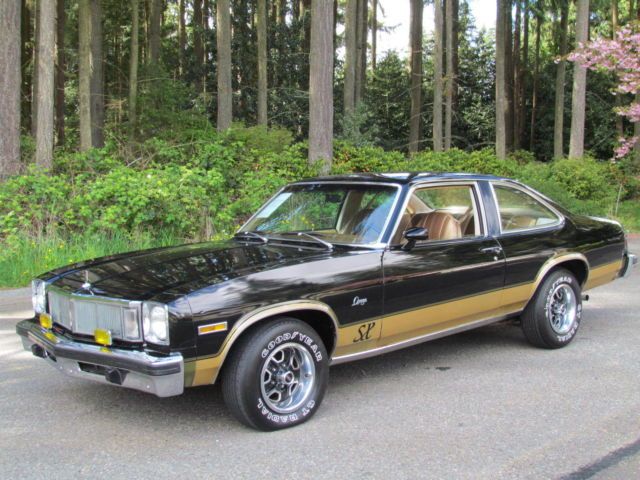 This one is a personal choice for me, because for a good chunk of my childhood, I rode in the back of my mother’s 1975 Omega, the one with the strange bent front grille. “Sporty” is the last thing I’d ever confuse that car with, even with it’s floor shifter. The X-cars themselves aren’t bad, and can be whipped up into shape, but the SX badge, what started out as a way to get a 442 without actually calling it one (your insurance company thanked you) was now a dress-up kit to evoke sportiness out of the Omega. Although, admittedly, it’s not the worst stripe package of the 1970s.

At least the Monza Mirage had a reason to exist at all. In IMSA, Chevrolet Monzas were kicking ass and taking names, flared fenders and all. On the showroom floors, 145 horsepower wasn’t going to set the world on fire, so the solution: tack on flares and stripes the same color as the race car had! For the 1970s, this at least had some genuine reason, but the could’ve at least found a wheel and tire package to fill the wheelwell up some…the OE rolling stock looked absolutely dinky. 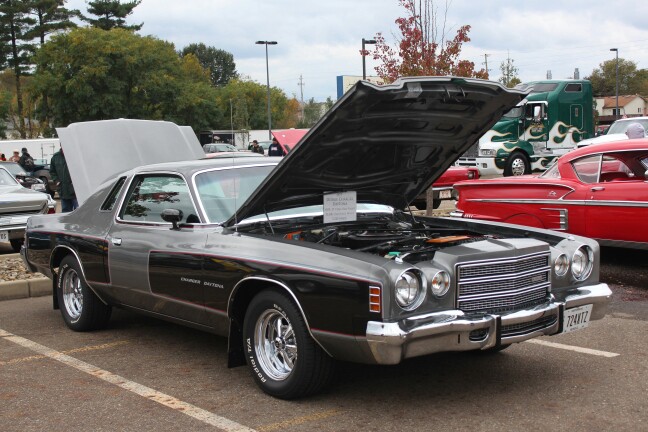 The Charger, again? Yep, again, and this time for something even worse than the Midnight Charger. That car was a product of it’s time. This one wasn’t, not even close. The Charger was supposed to be the performance yin to the Chrysler Cordoba’s yang, but when all that’s different are taillights and the grille, it doesn’t work out. So how do you upsell? Evoke memories of a car so wild that NASCAR legislated it out of competition! The 1969 Daytona was Chrysler Corporation saying, “Beat Ford’s ass on the track, no matter what”. The Charger Daytona says…um, what exactly? “Hey, kids, I want to be cool like you, too! 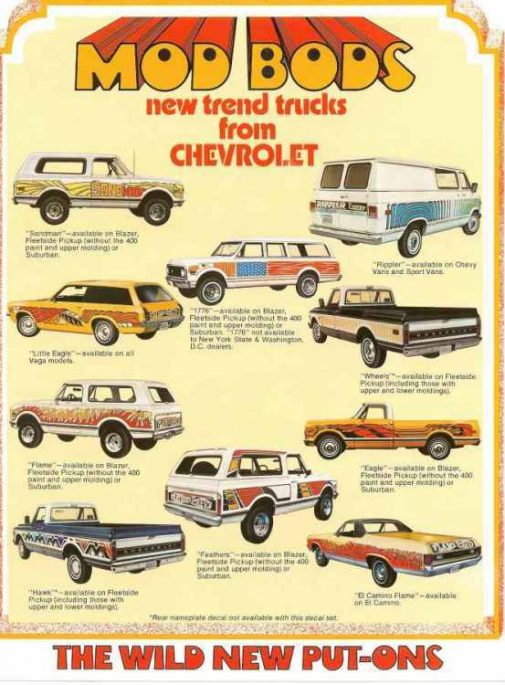 Until I started researching this list, I had never heard of the Mod Bods. I’m still not completely sorted on them, but here goes: in case your 1970-72-ish Chevrolet truck, van, Blazer, El Camino or Vega wagon wasn’t visually enough for you, there were graphics kits that you pretty much needed a dose of something to look at properly. This included a “Sandman” Blazer that looks like a straight rip-off from Australia, a “1776” package for Blazer, Suburban or trucks, or the “El Camino Flame” treatment to America’s home-grown ute. 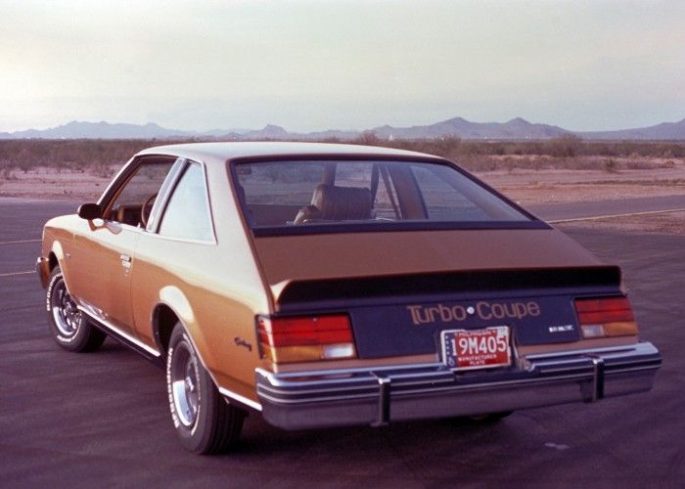 Buick and turbocharged six cylinders were a thing before the Grand National came about…231 V6s were being turbocharged in the mid-1970s and were proving to be potent alternatives to the V8. When the A-body got downsized for 1978, Buick, along with Oldsmobile, got the Aeroback shape for the Century…the slope-backed treatment that the Chevrolet Malibu and Pontiac Grand Am avoided. And oddly enough, Buick tried to make lemonade out of lemons by stuffing the turbocharged 3.8 into the slope-back Century model and calling it the Turbo Coupe. On the outside, you can at least give Buick credit for trying to make something out of the shape, But it didn’t work, and Buick kept working at the formula until all-black Regals started to catch on like wildfire.

If Viper's Came Like This The Line To Buy One Would Look Like Walmart On Black Friday Raging Rotary: Watch As This Twin-Rotor Mazda RX-7 Balances Wheelspin And Grip On The Quarter Mile

8 thoughts on “BangShift Top 11: Decal GT, Round Two! More All Show, Not Much Go From The Seventies!”