Memorial Day Memories: A Tribute To The OH-58D Kiowa Warrior, The Blood, Sweat And Years 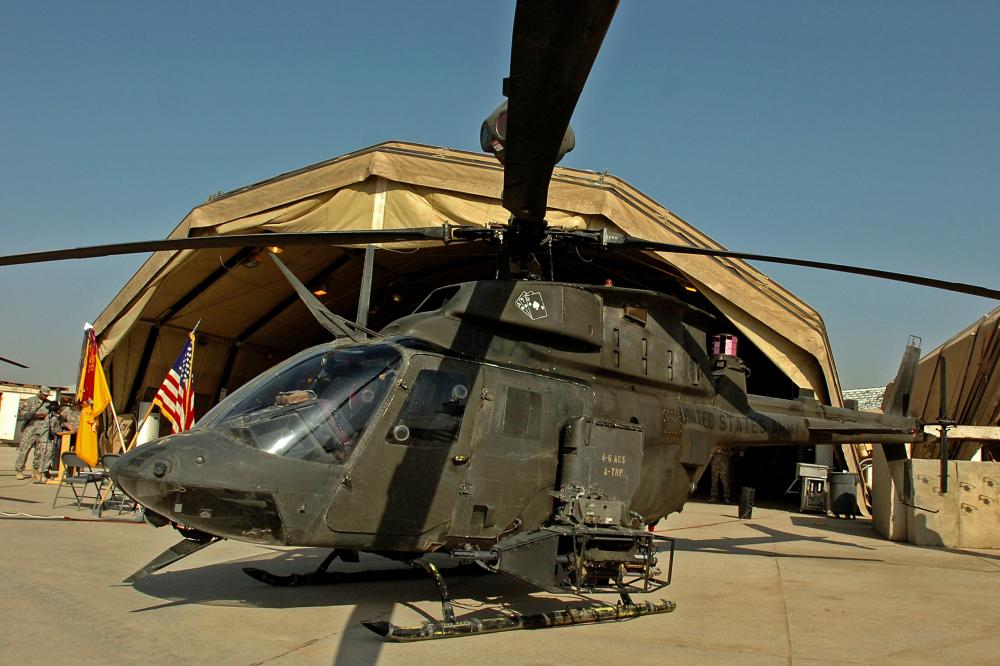 On Friday, April 15th, 2016, 1-17 Cavary flew thirty OH-58D Kiowa Warrior armed scout helicopters in a formation flight around Fort Bragg, North Carolina in a public thank you and farewell. When the unit deploys to Korea later this year, they will be the last OH-58 squadron in the United States Army, and when they return, the squadron will adapt AH-64 Apache gunship helicopters and unmanned aerial vehicles. It’s been sad watching the Kiowa Warrior die a slow death, mostly because I’ve spent so much time with them.

For ten years, the Kiowa was a solid part of my life. I joined the Army in mid-2001 and before I signed the paperwork I worked that poor recruiter over. He offered up tanker slots, truck driver slots, mechanic slots…anything he could think of that would appeal to the kid in the hot-rodded Chrysler that kept bugging him about college money. But I would not sign paperwork unless I was going to helicopters, and finally, after what seemed like forever, I got my slot. To this day I’ll swear that I heard “Blackhawk Crew Chief”, but after basic training, when I landed in Fort Eustis, Virgina (home of USAALS, the Army’s aviation training school) reality hit home when I met what my paperwork really said I was doing: “Armament, Avionic And Electronic Repair Technician, OH-58D”…or in plain English, everything under the sun that didn’t include washing windows, checking oil or flying the damn thing. Most Army training courses are a couple of months. The training course to be what I was lasted almost a full year, and it wasn’t even that thorough. It was tough, make no mistake, but you learned the basics: electrical repair techniques for a helicopter that had about eighteen miles’ worth of the stuff inside, troubleshooting every last possible system with a multimeter and the early 1980s era computer technology inside, learning how to break down, rebuild, and aim all of the weapons systems, and how to operate on and around the bird while it was running. Somehow I managed to pull everything together and by the August 2002 I was in Fort Hood. 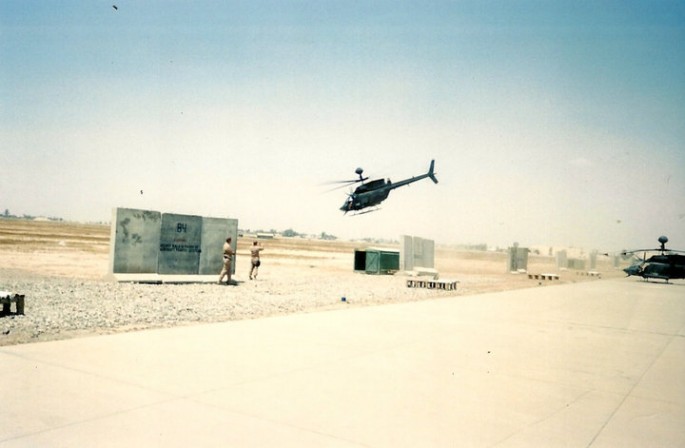 I want you to picture this: in 2002 I was a 19-year old kid with a chip on my shoulder, yet I had a toolbox and the responsibility, along with a bunch of roughly college-age kids, to keep somewhere around 20 to 30 of these machines flying at all times…and we did it. Work started before dawn, and ended when work was finished. There were days where we went home early, there were nights where we might have left the hangar at two or three in the morning hating everything and everyone. We trained in all sorts of weather, from the baking heat to the flash floods of the summer to some damn cold winter days and nights. And we went to Iraq, where we pushed those scrappy little birds farther than anyone ever expected. An Apache is a huge, menacing thing, but you can hear it for miles. On the opposite end, a Kiowa Warrior can, quite literally, sneak up on someone until they are in rifle range and are small enough to be great in urban combat. It was a far cry from the Kiowa’s Vietnam-era days, when there were no real electronics past the radio system, and it was meant to scout around unarmed or be a tiny transport helo. During Operation Iraqi Freedom/Operation Enduring Freedom, the Kiowa became known as a wicked little beast that was up for just about anything a pilot was willing to do with it. Between my two deployments, we saw bullet holes just about everywhere. We saw helicopters flying into base on fire. The pilots didn’t care…I’m proud to say that I worked for some of the ballsiest combat pilots out there, and I’ll assure you that if you met any of them, you’d never know it. The people I worked with on the ground…the crew chiefs, the specialized people, the civilians who helped us with deep-rooted problems…all consummate professionals, all focused on getting the job done so that when the call came out, you’d hear the “click-click-click-whooom-vrrrrr” of the Rolls-Royce 250-C30R3 turbine and there would be no drama.

I crawled over the bird for years. From climbing on top of the aircraft to work on the Mast Mounted Sight, to wedging my big ass into the pilot’s footwell while performing a pitot-static test, I did just about anything that you could be expected to do. I had ups and downs. I had one of the two main computers catch fire during a ground test. I shocked the shit out of myself with a failing circuit breaker. I rebuilt the XM296 .50 cal so often that I could probably strip, clean, reassemble, time and dry-fire the damn thing in my sleep. I can still smell the rank odor of “pro-seal” that the sheetmetal guys would whip up when we had to pull certain body panels. And I’ll be honest, I miss a lot of the work…everything was detailed and technical. I don’t however, miss writing up every little last motion on paper…I could spend half a day writing up work, but such is life when you are working on aircraft.

But what I miss the most, just after the people and the fun times, is the FARP, the Forward Area Rearm/Refuel Point. I loved working the FARP. Think of it like a NASCAR pit stop: when the bird lands, it has to be refueled and re-armed fast. If there is a problem, you have to either fix it in short order or call it a day and send the bird back to the hangar. Forget writing up the problem…in one notable incident, the electronic cocking mechanism for the gun wouldn’t work. What made it work is when after five minutes of thrashing, out of sheer anger and frustration, I kicked the motor and everything started working again. The blades are turning the whole time, so you’re working in a hurricane: if it’s hot, you have a giant ceiling fan and if it’s cold…well, life sucks and you hope some of the exhaust’s heat blows down onto you. It’s dangerous work and it’s rewarding work, and it’s the only time that I could play God: if I was the Pad Chief, I owned everything on my pad and my word was final. How often does an enlisted soldier get to scream bloody murder at officers in flight gear and walk away with no consequences and a “Get Out Of Jail Free” card? 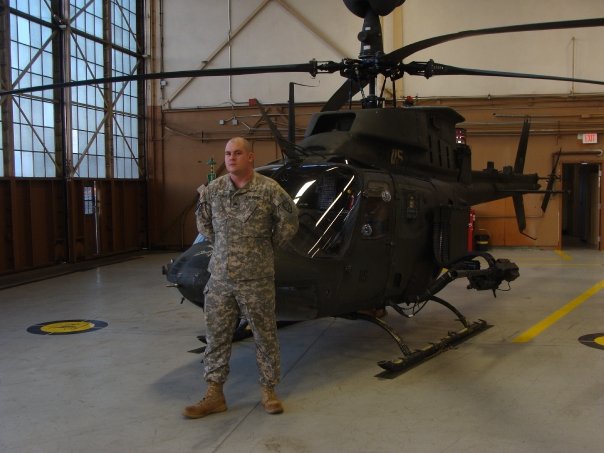 By mid-2009, it was becoming clear that my body wasn’t doing well anymore, and in June 2010 I was out of the military and away from the helicopters. I still got to see them for a few months more whenever I went onto Fort Lewis. And the writing was on the wall for the helicopter: every time higher-ups tried to replace the Kiowa or inject some new life into the airframe, it was shot down or failed miserably. The RAH-66 Comanche, the OH-58F, and the ARH-70 Arapahoe were all considered too expensive, and were all abandoned. The OH-58Ds, which were converted Vietnam-era aircraft, had been wildly successful, with hundreds of thousands of combat flight hours just in the OIF/OEF combat zones alone, not to mention any of their other work since their introduction as a part of Task Force 118 in Operation Prime Chance back in the late 1980s, were on their way out. On Friday, they said their final goodbye in public and in short order, will join the other OH-58D Kiowa Warriors, either in the AMARG “Boneyard” in Tucson, Arizona or on a weapons range as a target. Some might get lucky and become static display aircraft. But I don’t want to see a statue of my of the aircraft I invested blood, sweat and tears into mounted to a pole like a strange insect diorama. As far as I personally am concerned, it’s a disservice to the men and women who invested portions of their lives (and some, their entire lives) to the aircraft and the services it provided.  Instead, I’ll look to a picture I took during my first deployment, an accidental shot that is probably my most favorite picture ever: the Kiowa, waiting for it’s next mission, as the sun sets on another day. Until The Green… 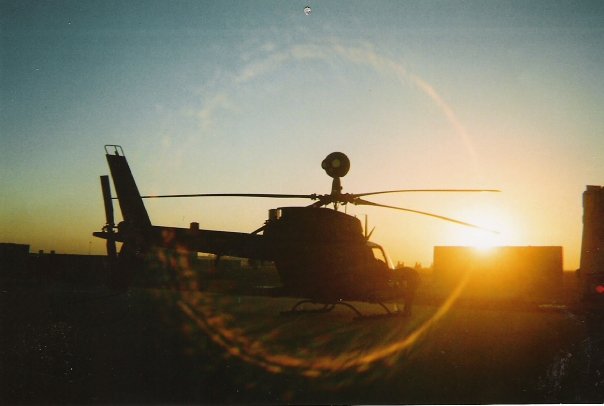 Fantastic Video: When Outrageous Was Possible - An Awesome Look At The Lambo Countach $1500 Beater Challenge: Cleetus And His Buddies Have A Good Ol'Fashioned Throwdown!

10 thoughts on “Memorial Day Memories: A Tribute To The OH-58D Kiowa Warrior, The Blood, Sweat And Years”