Unhinged: Christine Returns…But Will The Remake Be Worth A Second Round With The Possessed Plymouth?

Last week, the announcement was made: “Christine”, the horror-tinged tome from Stephen King that tells a tale of a boy, a car, and a lot of murders that involve tire tracks along the way was getting a reboot. And at first glance, that sounds like a bad idea come to life. For one, the novel already has been made into a movie, directed by none other than scream-flick master John Carpenter. Two, it was a pain in the ass to get 1957 Plymouths in 1982-1983 (the movie came out December 9, 1983), and we’re about forty years removed from then. 1957 Chrysler products of any type weren’t known for their staying power. They were known for three things: aggressive looks, powerful engines, and the ability to rust on command. And third, while the main story and characters were kept intact, there is a broad difference between the novel and movie regarding the storyline, the character detail, and the actual murders themselves.

I first watched the movie in 1988…when I was five years old and didn’t know how to grasp the relationships or the whole coming-of-age storyline. But I knew that a flaming Plymouth driving itself away from an exploding gas station that sat on the then-desolate corner of Valencia Boulevard and the McBean Parkway in Santa Clarita, California in hot pursuit of a leather-jacket wearing hardass who must’ve seen the devil’s eyes first-hand was frightening. Over time, I watched the movie over and over, and picked up on the nuances…Arnie Cunningham going from goofy geek to some stone-cold greaser, the anger amplifying throughout the film. Then I found the book… 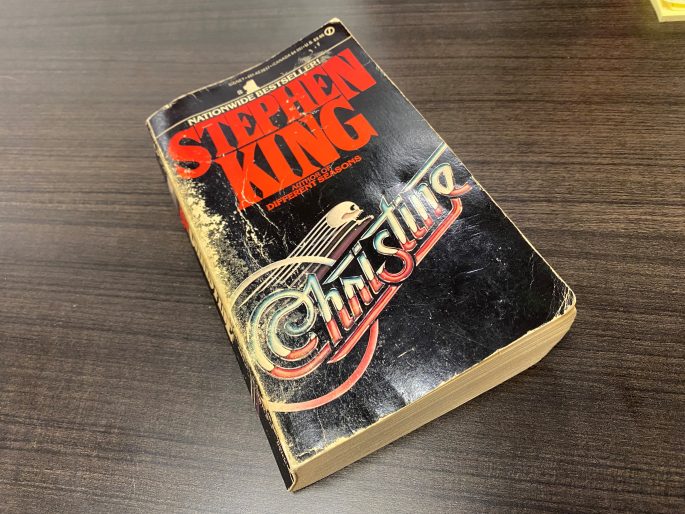 I don’t remember what library I liberated this copy from. It could have been some stash of reading materials located in one of the lounge bays when I was in Virginia training for the Army, or could have been pirated out of the libraries of any of the high-schools I attended. Maybe MHS, potentially Wasson. There’s even a chance that South Kitsap could have been looking for their copy for decades. There’s no markings to tell me who the original owner was. But this copy has gone with me to Iraq twice and has spent years locked up in storage cases. After I got the news that Bryan Fuller (the brain behind shows like Hannibal and American Gods) was going to be the guy leading the charge on the reboot, I dug this tattered, dog-eared copy out and had another read-through to refresh myself on what I thought the movie should have had and what would make doing a reboot movie about a killer car worth it.

Normally, I roll my eyes at reboots. But like I said before, nothing against John Carpenter’s flick, but a lot of good stuff went missing out of the novel. For one, Roland D. LeBay wasn’t in it at all…they blended his character into his brother, George, and made them one person, the old man who sells Arnie the car in the first place. There’s a lot to the relationship between Arnie, Roland LeBay, and Christine that was smoothed out and cleaned up, and many of the death scenes from the novel were either changed or omitted altogether. Even the Plymouth’s backstory is different than what King’s original vision had explained. And Buddy Repperton’s murder? Yeah…that is much more horrifying than a flaming street machine chasing him down a deserted highway while he’s at a slow jog could ever be…both from a sheer shock value, and from a psychological standpoint. 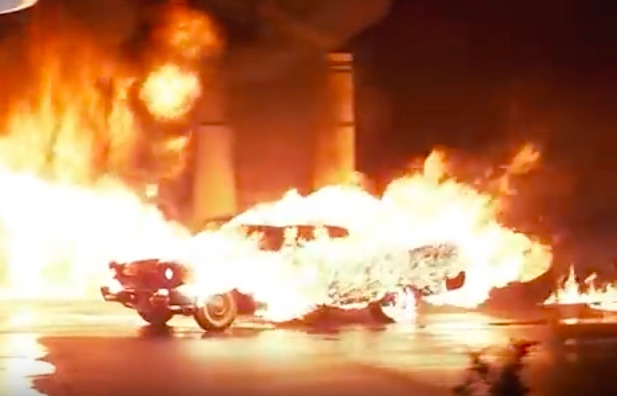 My sincere hope is that Fuller will create something along the lines of what Andy Muschietti did for another King novel, “It”. Keep the time period feel right, ramp the visuals up to modern-day expectations, and stay truer to the novel than the Carpenter film did, and I believe that it would be difficult to not make something decent. From the mind of an automotive freak, there’s no question what the star car must be (chromed, fast, in Autumn Red and Ivory White, natch) but what about the other cars? Does Dennis Guilder keep the blue Charger, or do we stay true to the book and put him in a used Duster? Will Regina Cunningham’s Volvo make it’s proper appearance? How about the other major star car that needs to be involved: Repperton’s ’77 Camaro, in full stinkbug stance mode, in blue, a mean mother in it’s own right. And what about Detective Junkins’ car? Read into the novel a bit, especially towards the end and I suspect that it should be a 1975-78 Mopar squad of some kind, but it had better look and sound a bit tougher than your standard, run-of-the-mill 440-powered pursuit special. And will Petunia get any love?

If, for some reason, Fuller ever reads this, I only have one major request: when Moochie realizes that his time is seconds away from running up on a cold winter’s night, as something long, low and very pissed off is slowly sizing him up, please make sure that the opening notes to the Thurston Harris version of “Little Bitty Pretty One” is playing. That song still makes me think that at any moment I’m about to hear dual quads open wide in demonic rage.

What are your thoughts? I’m curious to hear them.

When The Trucks Were Trucks! Big Tow and Knight Stalker ON Byron Dragway! See A Dragline Rescue A Caterpillar D11 Bulldozer Like It Is A Toy

14 thoughts on “Unhinged: Christine Returns…But Will The Remake Be Worth A Second Round With The Possessed Plymouth?”