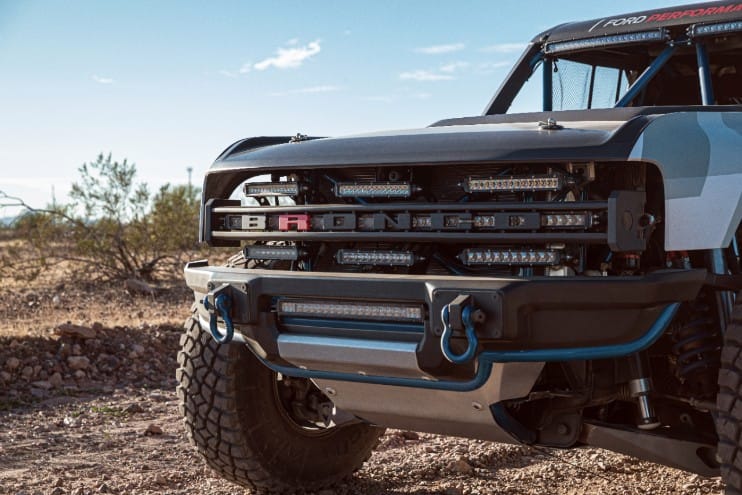 Well, hello there. We’ve known for a while that Ford was planning a return of the Bronco nameplate on a boxy four-wheel-drive style vehicle, but we weren’t expecting to see much about it until next year, when the production vehicle is set to debut. Guess we were wrong, because today Ford dropped a bomb from out of a clear sky: the Bronco R prototype race vehicle will be on the starting line for the Baja 1000 race on November 22nd, 2019 to celebrate the original Bronco’s historic win at Baja with Rod Hall and Larry Minor at the controls in 1969, and on sections of this year’s race Shelby Hall, Rod’s granddaughter, will be at the wheel.

The Bronco R is a modified Ford T6 (new Ranger) setup that has been strengthened for Baja running, fitted with a production-based five-link rear setup with eighteen inches of travel. The front is independent with fourteen inches of travel. 17-inch beadlocked wheels and 37-inch BF Goodrich tires will take the punishment from the desert, while the powertrain…well, all Ford has admitted to is that there is a twin-turbocharged EcoBoost mill of some kind underneath the hood somewhere. Built as a team effort between Ford Performance and Geiser Bros. Design and Development, the Bronco is meant to be a challenge for the production vehicle’s overall architecture.

The production Bronco is expected to make it’s debut sometime in Spring of 2020.