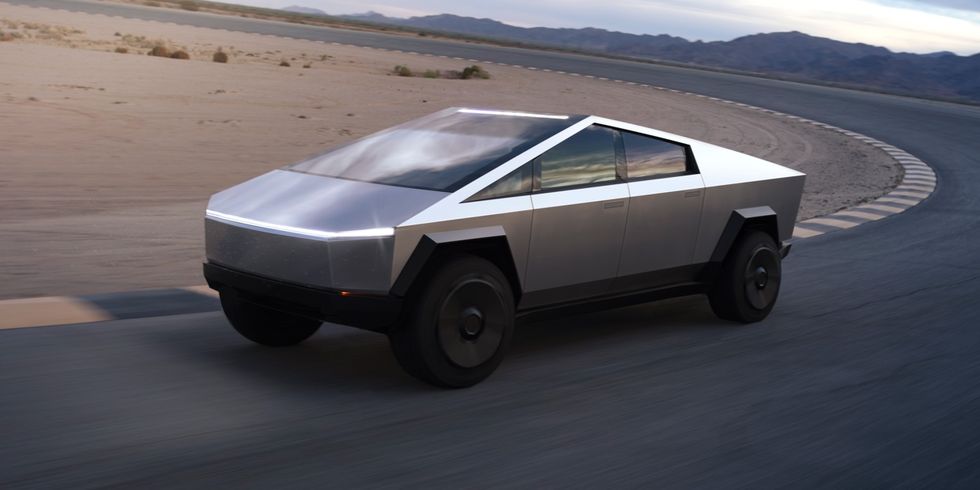 On one hand, it’s easy to count how many times Tesla was underrated, expected to fail, seen as a hopeless money pit and wound up delivering. The first Roadster, the Model S, Model 3, Model X…when I first saw a Roadster back in 2010, I was convinced that it was little more than a rich kid’s toy. Look at where the company is now. Love it or hate it, Tesla has made inroads. But then…then there is that very strange, very weird, very “this dude is gonna enslave us all” eccentric billionaire side to Elon Musk that leaves you wondering if we all have made a collective mistake in allowing this man to play with anything that isn’t Play-Doh. This is one of those times.

What you are looking at is the new Cybertruck. Tesla has wanted to run a pickup truck for quite some time, but up until this machine broke cover, many were expecting the Model S Ute of some kind, not the futuristic nightmare of John Z. DeLorean. And before you ask, yes, the truck is skinned in stainless steel, which was bashed on-stage by Tesla design chief Franz von Holzhausen with a sledgehammer to prove it’s durability. The glass was supposed to be armored too, but when von Holzhausen threw a metal ball at the window and the glass broke, Musk’s reaction (“Oh my f*cking God”) pretty much admitted that part was not in the program.

So, what are the figures? Right now, the claims are typical Tesla: 0-60 MPH in 2.9 seconds, 10.8 second quarter mile times, 500 miles of range at the maximum level. The Cybertruck is to be available with a single motor, a dual motor, or a tri-motor version and while the base level is set to be just under $40,000, we bet that isn’t going to be reality anytime soon, especially if the Model 3’s rollout was any indication. Towing capacity is 14,000 pounds, payload capacity is 3,500 pounds, the bed is a 6.5-foot unit, and the suspension will be adaptive air with adaptive dampers.

So who does the Cybertruck play with? Well, there’s the Rivian line of vehicles in the pipeline, as well as EV trucks from Ford and General Motors. But unlike those vehicles, ordering for the Cybertruck is open right now. You’ll still be waiting until after production starts in 2021, but you can order now.

We still see way too much DeLorean DMC-12 in this thing.

Buy It: The 1965 Koch Special Is An Incredible Window Into The Era Of Homebuilt American Sports Race Cars Jack Attack: Restoring A 70-year Old Blackhawk Bottle Jack Is A Satisfying Thing To Watch

25 thoughts on “Unveiled: Tesla Cybertruck – Who Ordered The DeLorean Crossover?”