Jun 03, 2019Brian LohnesHISTORIC, RACING & ACTION, VideosComments Off on These 1950s Bonneville Videos Are Your Monday Moment Of Hot Rodding Zen 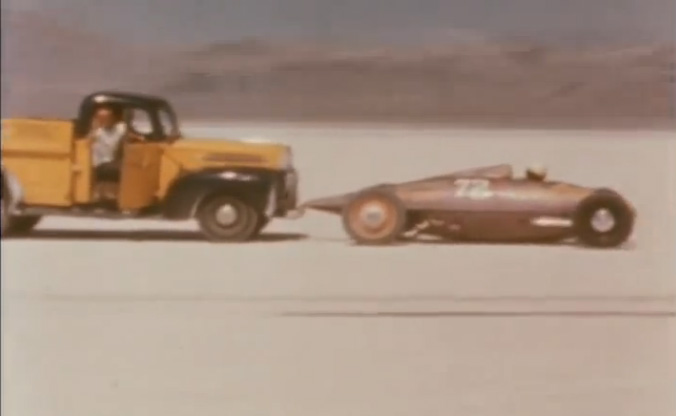 Sometimes you just need something cool to balance our your day, especially on a Monday when you are gearing up for the work week that is looming ahead. We found a couple of really amazing films taken at Bonneville in the early 1950s that show everything from the SCTA setting up the course, to the technical inspection process, to hot rods racing down the salt. My first experience at Bonneville came a few years back and it forever changed me and my understanding about hat exactly happens out there on the vast whiteness of the salt flats. The thing that I was most interested to see was how the experience stacked up against the old films and videos I have watched over the years, similar to the ones you see below. Outside of the look of the push trucks and some of the more modern aerodynamic designs, I believe that it looks and feels much the same as you’ll see in these videos.

Yes, there are more spectators for the first few days, but let’s be honest. The place is still in the middle of absolute nowhere, the cars are all very cool and unique and outside of some banners and stuff there is no corporate presence that is dominating the racing. No pyro, no jumbo-trons, nothing of that sort is even on the radar at Bonneville. The whole point of the exercise is for people to bring their stuff to one of the harshest environments on Earth and run it as hard and as fast as it can go just like it was 100 years ago when the first runs were made there.

The 2016 running of Bonneville Speed Week will be welcome (if it happens) because of the fact that it is the 101st anniversary of the world’s coolest natural race track being used for top speed runs and the best part is that the 101st will be honored as the 1st and 99th were, by the hard work and peak performances of the racers that flock there every August. People talk about the purity of competition at Bonneville and what we can tell you is that it still feels the same way that these videos look and that has only been through the hard work and dedication of the SCTA. THIS is some truly neat stuff. Watch the videos below.

Gallery: 50 Photos of Gassers and Gasser Style Cars From All Over The Country And The World! An Old Chevy, A Detroit Diesel, and a Tractor Snow Blower Equal Epic Win