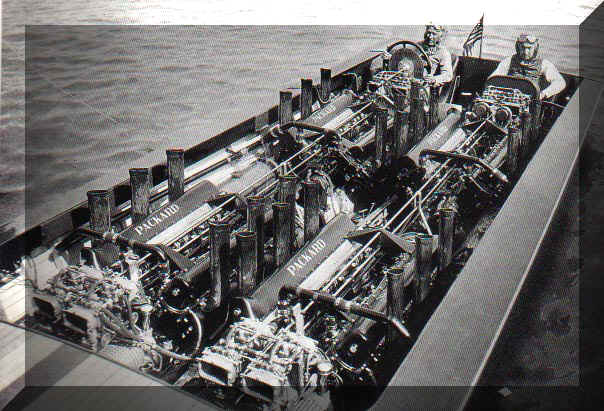 If there is one giant in the history of American speed that I’d give anything to meet it would be Gar Wood. The guy made immense amounts of money in his life inventing stuff like the hydraulic tilting bed for dump trucks, self packing sanitation trucks, and other cool stuff but the real reason is that that Gar Wood literally dominated the power boat racing scene basically from its creation through the early 1930s. He designed and raced the first boat to ever go more than 100mph on water, which was “Miss America IX” in 1931. His follow up act was one of the greatest waterborne hot rods ever built and it was basically a mechanical representation of its creative, unstoppable, and unrelenting owner. 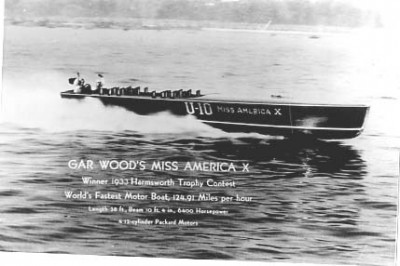 In the 1930s, powerboat racing was something that only the ultra-wealthy were really involved with. This was both personal and national pride on the line. The most important race in the world was called the Harmsworth Cup and it was contested at many places around the globe over the years but the races in Detroit, which reportedly drew more than a million people to spectate each year were the most legendary. Between 1920 and 1933 Gar Wood’s boats won every Harmsworth race. He was driving all but one of those boats. While each of the machines were cool and fast in their own right, it was the last Miss America, the 10th edition that we love the best. Why? Well, it had four massive Packard V-12s that were supercharged and tuned to within an inch of their lives. They each produced 1,800hp and two of them were fished out of 80 feet of water after a previous Miss America headed to Davy Jones’ locker with them on board.

While Miss America IX had the honor of being the first boat to ever run over 100mph on water, Wood figured that the British contingent was going to throw the kitchen sink at him in 1932. He was right. The Brits got Rolls Royce on board and were bringing their most stout effort yet. Knowing that the big Rolls Motor was more capable than his V12 Packards pound for pound, his idea was to simply bludgeon the water and the competition to death. Rules allowed for boats to be 40-feet long. Miss America was 38 long and 10-feet wide. The boat was basically built around the quartet of giant Packards. Wood and his riding engineer/mechanic sat at the extreme rear of the boat behind all of the engines. If you can picture it, each of the engines was linked  inline and each powered its own propellor. Packard engineers were convinced that there would be no way to keep the engines together while linked but they worked to time them perfectly and made them happy operating as two 24-cylinder monsters. Wood designed the gearbox that the engines were hooked to because again, the Packard engineers said that there was nothing available suitable for the loads it would be facing.

The craft itself was constructed by Nap Lisee, the guy responsible for all of the Miss America boats and an immense talent in the boat design realm. Lisee ordered a bunch of big Spruce lumber from Oregon which he used for the stringers in the hull. The rest of the boat was made of Mahogany. There were cool features like a forward rudder but for the most part the boat was simply a platform to support the Packards and all of their power.

Consuming almost 10 gallons of fuel per mile at full song, the craft became the first to go at a speed of more than two miles per minute and topped out at 125.42 MPH in 1932. That same year it 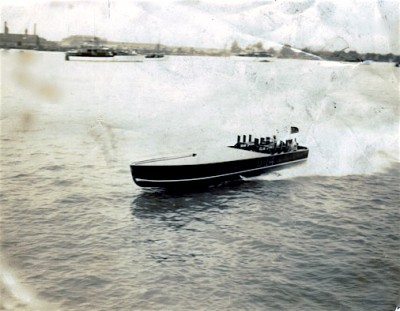 completely humiliated the Rolls Royce powered British entry to the point that Rolls got out of the powerboat racing engine game after that. The following year Wood ran the same boat and the British came back with a smaller craft with a less powerful engine and made a race of it, but Wood again cleaned house. He retired from motorboat racing after that event, his son carrying on the family name on the water.

While modern boats can go lots faster with lots less power, you have to consider the time, the rudimentary technology (as compared to today) the complete inability to study things like fluid dynamics at any real level. It was all theory, empirical thinking, and evolving design (if something worked a little….a lot more must be better). This all played into Wood’s hands. He was a prolific inventor and thinker that at one point in his life had more patents than any other living US citizen. His nature was to be a little ahead of everyone else and that translated to his boats and the water they carved through.

Garfield Wood lived to be 90 years old and passed away in 1971. Given a time machine and one destination, I’d land at the Detroit Harmsworth races in a pair of coveralls with a Packard logo on the back, wrenches in hand, making the final checks on the most powerful racing vehicle in the world circa 1932.

THE VIDEO BELOW IS EPIC BECAUSE IT WAS SHOT IN 1932 HAS SOUND, AND SHOWS THE BOAT IN FULL HAUL ASS MODE ON THE RIVER IN DETROIT. YOU’LL HEAR WOOD SPEAK BUT MORE IMPORTANTLY YOU’LL HERE THE SOUND OF 48 EXHAUST PIPES SINGING LOUDLY! AMERICAN HORESPOWER HISTORY ON THE WATER!

NASCAR Nitrous Party: Cleetus Takes The Dale Truck To The Dragstrip! Carlisle Ford Nationals 2020: From The Basic To The Baddest