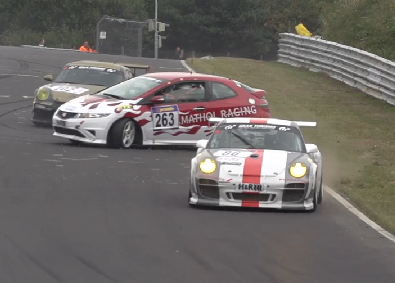 Hey, I guess today is “near miss” day on BangShift. That’s fine with me because like the video of the wild drag boat “save and sink” earlier today this video featuring three cars racing on the famed German Nurburgring nearly wrecking but not is fantastic. Shot in super slow motion, you really get a sense of what it is like and how quickly great drivers are able to make decisive moves to prevent disaster.

The video begins with a trio of race cars heading down a hill on the course. We then spot a Honda Civic race car setting up for the same hill. The difference is that the driver of the Honda loses the handle on the car and heads off course. As the Honda begins to slide sideways off course the driver corrects, we can see two Porsches approaching. Suddenly…or as suddenly as something can happen in slow motion, the Honda gets back on the asphalt. Initially that may lead you to believe it to be a positive development, but it is not. The Honda is still out of control and it gets crossed up and heads sideways and backwards across the racing line. The first Porsche is able to make a quick adjustment and power away from the scene, but the second car is the one to watch.

When the Honda is completely sideways it looks like the second car is about to t-bone it in epic fashion. Here’s where the wheat gets sorted out from the chaff and the second driver reacts in a split second, piloting his car around the Honda and away from the potential nightmare of busted parts and injury.

Watched in real time this would be something that took a few seconds. Watched in the minute long slow motion video it is an amazing ballet of machines and really shows that true race car drivers are capable of doing some neat stuff when their heads are fully in the game.

PRESS PLAY BELOW TO SEE SUPER SLOW MOTION VIDEO OF A NEAR MISS T-BONE WRECK!

National Challenge '72: Lundberg, Garlits and The Greatest Rogue Drag Race Ever Barnstormin': You Don't Want Reality So Stop Bitching About Not Getting It

2 thoughts on “Amazing Video: Watch An Awesome Close Call On The Nurburgring That Results In Zero Wreckage – Awesome Driving!”