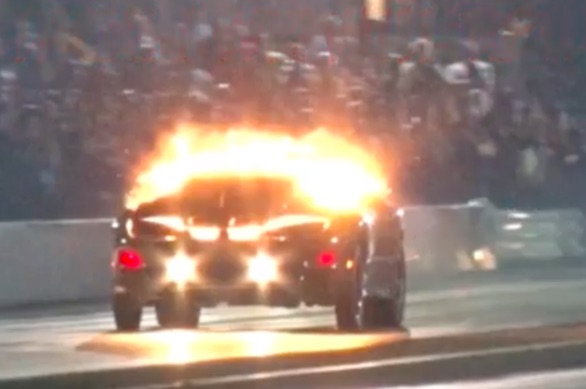 “Too much power…did not enjoy.” That brief but accurate summary of what happened to Joe Hunt’s Pontiac Firehawk doesn’t do justice to what really happened. The Firehawk, known well as the Black Hawk, is a bottle-baby car through and through, running tons of the stuff though the 347ci LS1-based engine. Normally, the Pontiac’s party trick is to pull the front end far enough to worry about a blowover, but during a no-prep event at Ozarks Raceway Park, the Firehawk instead decided to live up to it’s nickname with multiple nitrous backfires, the kind of which put a motor out of commission and get the safety safari’s fire team nervous. It sucks to see a racer blow up an engine like that, but on the bright side…if there is a bright side to such an event…he’s got one of the coolest pictures of a 4th gen Firebird anywhere: a Firehawk that looks like it’s escaping Hell itself!

NMRA/NMCA Super Bowl Video: A 5-Second Pro Mod Spots A 7-Second Tiny Tire Mustang - Does He Catch Him? Screamin' Demon Feature: This 1971 Dodge Has A Nasty Small Block And A Retro Look That'll Be In Forever

6 thoughts on “BOOM! The Black Hawk Firehawk Finds The Nitrous Oxide Limit For An LS1 At Ozarks Raceway Park!”