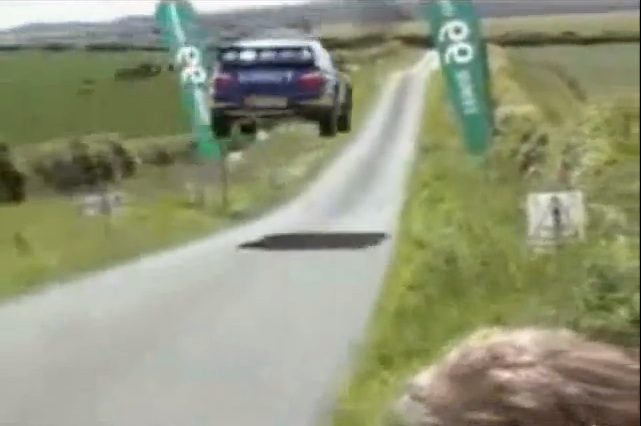 I know this footage well…shortly after getting internet in my living quarters during my deployment in 2007, this footage was sent to me by a friend who wrote, “if you drove rally cars, this would be you.” I can’t say for certain that it would be though…and a lot of that has to do with my flying experiences. To put into perspective what you are actually seeing: a Cessna 172 takes off at about 75 miles an hour, depending on takeoff weight. This piece of footage, which shows driver Barry Johnson running the 2007 Jim Clark Rally in Scotland, shows said Scooby flying by at about 136 miles an hour in one very sustained and steady flight path…pushing twice the speed a light aircraft needs to get on the ground. And I’ve seen Scottish roads similar to the ones used…they are narrow and one screwup will result in mangled sheet metal and a whole new set of rules from the FIA. That being said, when Johnson took flight on the Leitholm stage, he may have earned his place in automotive infamy, because we haven’t seen flight like that since the old footage of the Buick LeSabre being launched halfway across a small valley at full-tilt. This guy has stones, and they were probably halfway past his stomach and into his throat for this jump!

Watch These Immense Liebherr Cranes Put On A Demonstration Of Strength By Lifting Each Other Think The Snow Blower That Ate The Geo Was Cool? This Monster Makes It Look Like A Tonka Toy - Behold The Snow Wolf