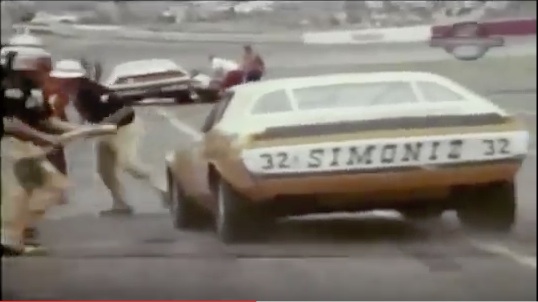 It’s been lamented over and over that the only reason people watch NASCAR anything is simply for the crashes. And honestly, we understand that. The personality was sucked out of most of the drivers, NASCAR’s rules have prohibited (or at least, punish) any show of emotion from the racers that isn’t tied to sponsorship money or celebration happiness, and the cars have had more in common with a Power Wheels toy than their respective Ford, Chevrolet, Dodge, whatever street model since about 1988. In person, at least, you get the noise, the smells, the spectacle. At home, you get ESPN coverage, or ABC coverage, and at least one or two yahoos telling you what you are seeing. There’s a reason I can’t stand watching NASCAR racing on television.

In 1974, however, things were a lot different. You were five years away from the televised broadcast of Cale Yarborough and the Allison brother’s scrap at Daytona. If you did get to see a race on television, it was a seriously clipped-down and narrated event, like this coverage of the 1974 World 600 race at Charlotte Motor Speedway done by Car and Track. With (I believe) Bud Lindemann calling out the action and drivers like Richard Petty, Buddy Baker and a young Darrell Waltrip fighting on the shortened run (instead of 600 miles, the race was shrunk down to 540 miles to reflect the energy crisis), the action is tight, the race is exciting without a car barrel-rolling down the front stretch, and the final laps are an outright battle.

Nothing Else Sounds Like It: Watch This Beautiful Ferrari 512 Driven By Derek Bell Scream Up Goodwood Bandimere, Tuesday Morning: 2020 Rocky Mountain Race Week Day One Coverage From 1320Video.com!