No Means No: The Day That Tom Sykes’s Kawasaki Called It Quits

Aug 07, 2020Bryan McTaggartCRASH & BURN, VideosComments Off on No Means No: The Day That Tom Sykes’s Kawasaki Called It Quits 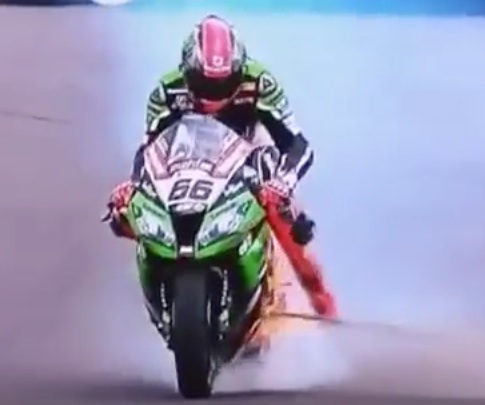 Ever have the kind of day that you regret waking up for? That was July 21st, 2013 for World Superbike rider Tom Sykes. The event was the eighth round of the World Superbike Championship, and was held at the 2.46 mile long Moscow Raceway. Sykes, riding a Kawasaki ZX-10R, had been enjoying a healthy 2013 season, with six pole position starts, five wins, and seven fastest-lap achievements prior to the Moscow race. But Moscow proved to be plagued with problems, least of which involved Sykes’ racer. After starting out in ninth position, he had managed to power his way up to fourth, and that’s when the Kawasaki bypassed the two-week notice and quit on the spot, puking oil out of the left side of the block and flames from both sides. You can judge the amount of hatred and disgust Sykes had for the bike as he throws it to the ground and walks away, and you can empathize with him, but understand that this was actually a minor incident in this event: the Moscow race ended up cancelled after rider Andrea Antonelli was fatally injured in a crash.