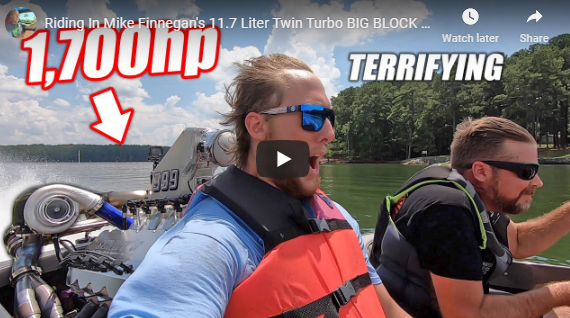 You’ve seen Mike Finnegan’s killer 700 plus cubic inch, 1,700 + horsepower, twin-turbo jet boat named Game Over on here before and we love the thing. It is sick, fast, and sexy as hell. Mike’s been doing stuff with this combo that nobody has ever done in a boat like this and is constantly developing new parts, pieces, and solutions to make this thing work. And while it isn’t fully dialed in yet, the thing flat hauls ass from zero to about 350 feet, where it is running WAY over 100 miles per hour already. So when Finnegan was hanging out with Cleetus and the boys, he had to take Cleetus for a ride just to show him what real speed was all about. By the look at Cleetus’ face, we think he almost shat himself. This is one hell of a ride.

Keep in mind, this thing makes stupid power, weighs almost nothing, leaves off a what amounts to a boat trans brake, and is almost immediately at full rpm and boost. The entire time it is scooping and sucking in water under the boat as fast as possible and then spitting it out the back like a rocket. Think jet ski, with 10-20 times more power, but with only about twice the weight. Yep, it’s that kind of crazy. And it will sit you back and try to rip your face off. Finnegan acts like it is nothing, because he’s been stupid fast on the water for years in drag boats, but this is no joke and Cleetus found that out first hand.

Between Muscle And Malaise: 1972 Ford Gran Torino Four Digit Stomper: Check Out The Parts And Pieces Freiburger Is Going To Turn Into 1,000+ Naturally Aspirated Horsepower