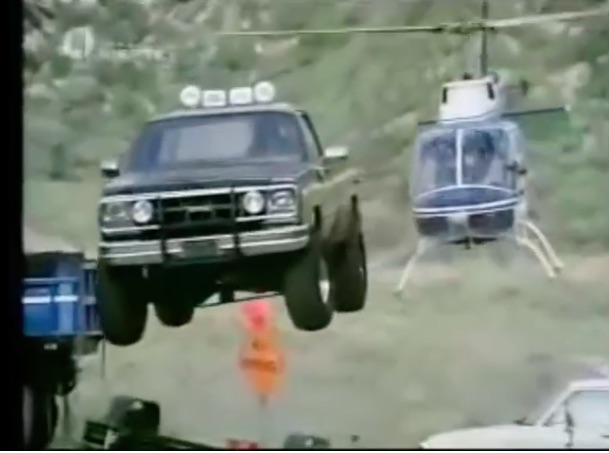 If you did not grow up in the 1980s, you truly missed the golden age of automotive television. Yes, there are more shows available to watch today but few of them have even the faintest ability to create the hero worship and automotive dreamscape that 1980s TV did. The Dukes of Hazzard, The Fall Guy, Knight Rider, and the list goes on and on and on. The best part was that these hero vehicles were more than just eye candy. They were stars that did stunts and got the hell beaten out of them right on your tv screen week in and week out. Today we have a killer video for you. This hunk of epicene is a five minute reel showing every single jump that the specially built Fall Guy GMC ever made on television.

During the early years of the Fall Guy, the production used stock trucks that they bought for cost from GM. As most episodes featured some great action (and there was no CG available to “make it”) the trucks got beaten to a pulp and they were buying them by the bushel.

With costs rising and the show trooping on, something had to be done. That something was the construction of a couple special jump trucks that had the engine relocated, beefed up dual shock suspension, braced axles, and some additional safety measures for the stunt driver.

The coolest part was where they put the engine. It was basically IN the cab. Seriously, there are photos that show the oil pan effectively lined up with the cab door openings. Mental, but brilliant because the machine flew flat and true rather than nose diving into the Earth…even though it does that a couple of times here.

Pay attention to the front axle on every jump. They killed a LOT of those over the years. This is freaking awesome video.

Video: Put A 5 or 6 Speed Stick In Your GMT400 1988-1998 GM Truck NOW With An American Powertrain Kit Tons Of Trucks! Every Photo From Our C10 Nationals Coverage In Texas Can Be Found Right Here!