Aug 10, 2022Brian LohnesHISTORIC, VideosComments Off on Watch The Diesel Land Speed Record Get Set In 1936 At The Famed Brooklands Race Track In England – A Bus Engine Made The Power 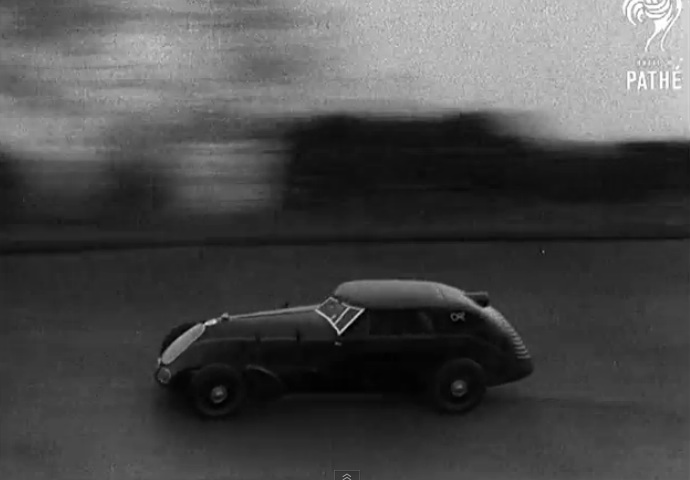 Captain George Eyston was one of the British “rock stars” of the land speed wars during the 1930s. Between Eyston, John Cobb, and Sir Malcolm Campbell there was constant innovation, constant battles for speed supremacy, and near constant media swirling around all three. While Eyston would touch speeds of nearly 400mph before hie land speed career was over, it was this 106-mph record that we decided to highlight today. Why? For a couple reasons actually. The first is the setting which doesn’t get any neater. You’ll see this diesel powered hot rod charging around the high banks of the Brooklands race track in England and what makes the Brooklands special is that it was the first purpose built race track in the world. Previously all racing was done on public roads, horse tracks or some combo of the two. Brooklands was cutting edge for its time (early 1900s) and it inspired places like the Indianapolis Motor Speedway and others.

The second reason is the car! This thing was a large hot rod based off of a Chrysler chassis, it used the diesel engine from a double decker British bus for power. Judging by the scale of the car, this was a brutish piece that obviously made loads of torque and not much in the way of horsepower. We shudder to think of what the actual displacement of the engine was. It had to be massive and heavy. We also do no know what transmission was behind it. When you watch the video and actually hear this thing come by at full song, you’ll want to listen a couple times. It is the combo of anger, pain, work, and roar, that we love and could listen to all day.

On this day Eyston ran 106mph and while the date listed claims to be 1933 we’re virtually certain that this run was made in 1936. Splitting hairs we know but hey, we’re nothing if not freaks for historical details around here, right? You’ll see and hear the car on the track and then you’ll see and hear Captain George Eyston talk about the fuel efficiency of the diesel engine, etc. It really is a cool slice of history.  106 is not much to brag about today and even in 1936 at the true upper echelons of racing and performance it wasn’t blazing, but for a diesel powered car, it was near warp speed. Pretty cool that 80 years ago, guys were looking to se records in all different kinds of equipment!