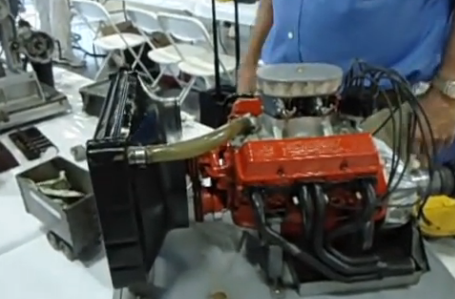 Miniature engines are absolutely fantastic and we have run lots of them here on BangShift. This small block Chevy isn’t the smallest engine we have ever run and it actually may be the biggest of the smallest engines we have ever run, if you catch our drift. We dig the fact that it has some size to it because when the older gent who built it fires the snotty little mini-mouse engine up it makes some sweet, sweet noise out of the lilliputian long tube headers on it. We also love the fact that the guy dives right in with a flathead screwdriver to tweak the carbs and the fact that the mill has a radiator, full accessory drive with water pump, a little bell housing, At one point the guy shooting the video moves the camera and a little small block head can be seen sitting on the table next to the engine.

All of the little parts are one thing but the roar and crackling idle note of the engine through the headers is what sent us into the stratosphere of coolness. We want to wrap this little Chevy up in a scaled down stock eliminator car and have it just mobile enough to start and roll around for our own enjoyment. The headers would remain open because bottling up this sound would be a crime against gearhead humanity.

While we’re building our own 1,000hp LS engine here on BangShift it all seems to pale in comparison to the skill, ingenuity, and pure awesome that these little engines and the guys who build them exude. These engines are small in size but huge in every other area of mechanical prowess. Kudos to the builder of this miniscule small block. We want to build a scale dragster with two of them!

PRESS PLAY BELOW TO SEE A TINY LITTLE SMALL BLOCK BECOME THE MOUSE THAT ROARED WHEN IT STARTS!