Aug 16, 2020Chad ReynoldsFUNNY STUFF, MISC, RACING & ACTION, TECH, VideosComments Off on Finnegan Speed Tests Three Stand Up Jet Skis To See If The New 2021 Yamaha Super Jet Is As Fast As It Looks 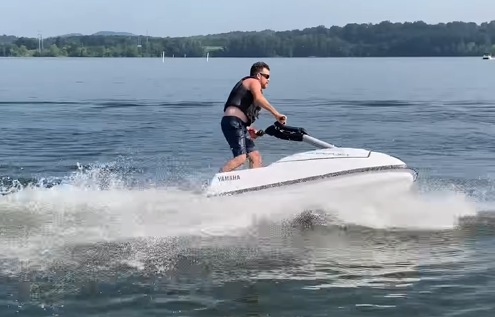 He did it for you…because he cares…and for science. On the surface this seems like a test anyone would want to do, but that’s only because most of you thinking a day on the lake hauling ass on stand up jet skis is a relaxing and fun thing. You think that because you haven’t actually ridden a stand up ski before. Historically speaking, they are known for two things. Amazing amounts of fun, and an amazing amount of work to have that fun. Work that can bite you in the ass if you do it just a little wrong. But again, our friend Mike Finnegan is so committed to you, and to science, that he was willing to risk flying over the bars on one of these, or all three, in order to bring you the real deal speed test you all deserve.

Not to be a spoiler, but I want to make sure all of you know that Mike did in fact live through it and does not seem to have been injured at all during filming. Well maybe a bruise or two to the ego from some of the incredibly smooth low speed dismounts, but overall I think he’s a happy camper who came out unscathed.

So here is the test. 1994 almost stock Super Jet, the flat nosed, high flying, stunt machine that made stand up skis so iconic vs 2020 Super Jet which is a refined and modern version of the 1994, and is still a brapping 2-stroke bad ass. These two belong to Finnegan and he rides them regularly enough to know them in and out. The challenger is the new 4-stroke (GASP) Yamaha Super Jet. But is it just a 4-stroke version of the 2020? Is it slow and heavy? Is it so easy to ride that it makes it not cool anymore? The answer is NO and YES and NO and YES, but not in that order.