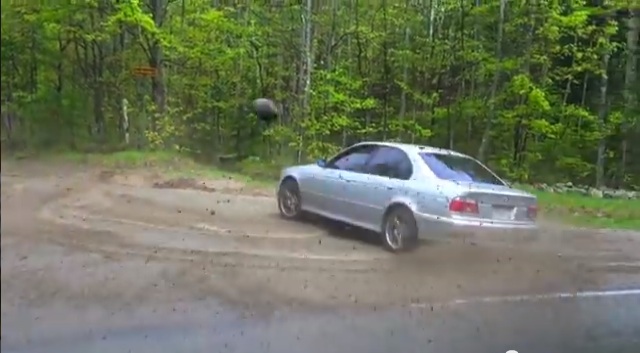 One person, in the car, driving like an ass equals one person involved when things go wrong. One person in the car plus one person outside of the car means someone can be hurt regardless of the success or failure of the driver. Cars, plus dirt, plus wheelspin will equal pain if you’re too close. I’ve witnessed this in person: at the 2010 Olympic Rally some idiot child got too close to the course as the racers were ripping on by and was rewarded for his efforts with a spray of gravel from a Subaru, with one of the stones pinging off of his kibbles and bits. He dropped like a sack of potatoes to the ground, making a noise that normally is only heard during elk mating season while everybody within fifty yards of his position fell over laughing. Distance is your friend. And, maybe, a sport cup might’ve been a good idea too.

In a similar vein, this footage of a guy playing around with his BMW 540i Sport is another lesson learned. Does it look like fun? Of course! But do you see that one happy little rock in this photo? Yeah, that’s not aimed at somebody’s nuts. That’s going straight for the camera operator’s head. This isn’t going to end well…with one solid thump! the rock connects, and while the camera view doesn’t show it, we’re sure the camera operator was seeing stars in crystal-clear high definition.  Any bets on whether or not these two guys are still friends?

Here's A High Power 408 Stroker Ford You Can Build And Install Before Intergalactic Ford Fest! Hurry Up, You Have No Excuses! Rough Start: 1973 AMC Hornet - Call It The Mongrel!