Historical Footage: Have You Ever Wondered What Would Happen If You Crashed A 1970s-era Fiesta Into A Lightpole? 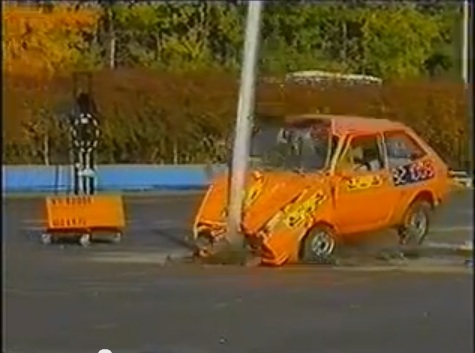 The Ford Fiesta is an interesting small car. We got it in the United States for three years (1978-1980) as one of the many knee-jerk reactions to the 1970s gas crises and quickly realized that it might be a bit too small for a country filled with four-door sedans that weighed in at over 5,000 pounds, regardless of how well it sipped the flammable stuff. Once prices returned to normal and the spigots flowed normally, most of these wound up in rollover contests before they were unceremoniously squashed flatter than a bug. In Europe, however, they did well, certainly helped by young drivers who found the XR2 performance model a bit sprightly and zippy. Personally, I like them with the roof hacked off and the hatch mangled up, turning it into a micro-ute, but that’s just me.

For one reason or another, someone decided to test the Fiesta’s durability against a light pole. We don’t know who threw this test together or just how fast the car was traveling at impact, but what we do want to know, seriously, is where the engine wound up once the deforming was all said and done. Overall, the passenger compartment looks relatively whole, but that means nothing if the shifter is now an official part of your anatomy…or an intrusive extra you weren’t intending upon.

6 thoughts on “Historical Footage: Have You Ever Wondered What Would Happen If You Crashed A 1970s-era Fiesta Into A Lightpole?”