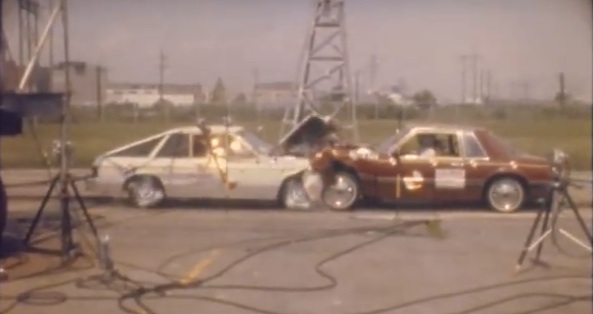 Digging through old NHTSA footage brings up a strange trend in the early 1980s: these guys loved to crash-test Fox Mustangs into whatever car they could nose up against it. Why the Mustang? Was it because they felt that young, inexperienced buyers would jump for Ford’s little pony first? Maybe…in 1982, there wasn’t much going for the market in any corner. This footage shows an unfortunate root-beer brown notchback ‘Stang going up against the sportiest 1982 offering that Mopar had to offer: the Plymouth Turismo TC3. Hmm…we don’t expect to see a lot of tears wept for its demise. Using a 35 MPH direct front impact, both cars meet their maker, but how they do it is different. The Mustang tends to maintain shape better and interior deformation is nearly nonexistent…the steering wheel being a great exception, assuring most people that had the dummy been a real boy, he’d be experiencing one hell of a headache…if he was lucky. The TC3, on the other hand, crumples up nicely…maybe too well, with a lot of wrinkling of body structures and a dashboard that looks to be where knees should be. Either way, we wouldn’t want to be in either car anytime soon.