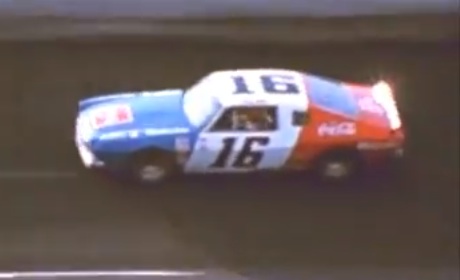 When AMC redesigned the Matador line for 1974, they essentially made two different cars out of the same name: the sedan and wagon were basically face lifted versions of the car that replaced the Rebel mid-sizer in 1971, and were well-known as police vehicles. Then there was the coupe, a design that, depending on your tastes, varies between “polarizing” and “horrifying”. A joint effort between AMC’s design wizard, Dick Teague, and AMC driver Mark Donohue, the Matador coupe was a radical departure not only from the previous Matador coupe, but from just about every form of conventional design in the 1970s, period. Teague claimed to have been influenced by his first design for American Motors, the 1964 American, but unless you seriously squint at the nose of the Matador coupe, you won’t see it. While it isn’t a pretty car, it did do two things that surprised a lot of people: for one, it sold surprisingly well in it’s first year, with almost two-thirds of the overall production of 100,000 coupes ever made sold in 1974, and secondly, but even more eye-raising, was that AMC took the Matador to NASCAR, with Donohue and Bobby Allison driving two Penske-prepped cars. This footage comes from the last win for the Matador coupe, the 1975 Southern 500, where Allison was battling Richard Petty for the lead of the race. Petty was a sincere threat in NASCAR at the time, and the #43 Chargers that he was running at the time were the stuff of nightmares for his competitors, so you can imagine just how much of a morale boost it was for American Motors every time a Matador brought home the checkered flag.

Beast On A Budget: Watch This 1,000hp Naturally Aspirated Big Block Get Built, Dynoed, and Bogged If You Thought The Block Was Cool, This CNC Video Showing A Cylinder Head Being Made Is Amazing