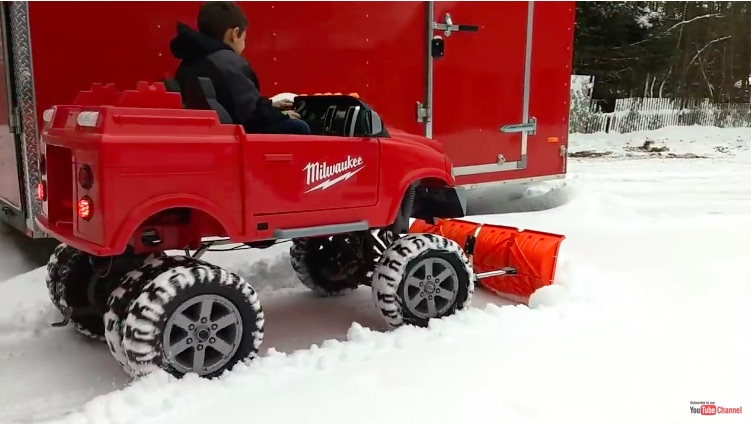 Now this is the type of project we can get behind! You are about to watch a video showing the build and functionality of a hot rodder power wheels plow rig! This guy’s kiddo was asking his pop if he’d be able to plow with the little truck he cruises around the house in. The dad put his thoughts together, put his fab skills to work, and the result is a four wheel drive, lifted, snow chained, V-plow equipped Ram!

The plastic tires are not doing the guy any favors in the snow but this thing is so much fun, he seems to learn that as long as he does not try to take a full mouthful of snow in the plow, he can move whatever he wants.

The “extra mile” work on this one is brilliant, especially in the plow which is made up of two snow shovels. There are linear actuators that allow the plow to run as a normal straight piece and then it can be flipped into a V when the truck needs to break through a little snowbank or deeper powder.

Lastly we think the capper on this is the fact that dad stuck with basically stock parts and did not go crazy with a gas motor or whatever. Yeah the controller has allow the stock motors to work a little harder than they would have from the factory but this is a really cool project and something that the little guy will get a few winters of use out of until he starts commandeering his father’s truck to push the white stuff with!

Incredible Video: This 1942 Film Takes Us From Casting To Finished Product At A Curtiss-Wright Airplane Engine Factory This 1969 Ford F100 Ranger Is A Great Pickup Project That Could Be Awesome Without A Ton Of Work