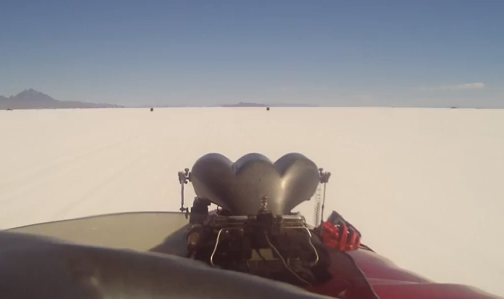 Of all the fearsome machines at Bonneville, there are a certain few that even the most seasoned of salt veterans look at with a special aura. The #911 Cummins, Beck, and Davidson blown fuel roadster is one such machine. This was the first roadster to break 300mph on the salt and it is for all intents and purposes a 1934 Ford powered by a slightly tuned down top fuel engine that makes in the neighborhood of 5,000hp. The wheelbase is short, the handling is (as you’ll see) temperamental and it sounds like the end of the world is happening around you when the fire it up.

In this video, Dave Davidson is at the controls and wrasslin’ the car down the long course at Bonneville. Normally, we’d tell you to skip a few minutes into the video to get right to where the action starts, but we’re not doing that today. Why? Because the first few minutes is a fascinating and pretty intimate look at what the starting line is like a Bonneville. You’ll hear conversations among the crew. You’ll hear the starter talk to Davidson about the salt conditions and the wind conditions on the course. You see the starter go through the final safety checks on Davidson before standing back to signal that the course is open and allow the crew to fire the snarling bastard of an engine that bludgeons this car down the salt.

Another thing that is of interest in this video is what happens to the camera. According to John Beck who is the engine builder on the car (and a man who has also driven this machine to stratospheric speeds) the engine seized up a wrist pin during the run and then pressurized the crankcase enough to cause it to mist oil out of the motor. That’s why the camera gets “foggy” after the car gets going at a rate of speed that angels fear to travel at. Before the “fog” you can see Davidson hugging the side of the course, flying by the mile markers and distance indicators seemingly inches off of his left side. Just watching the cat hunt around after he comes off the truck is enough to pucker your backside, but when you see how fast he is going once he crosses the two and three mile markers, well….WOW. Terminal speed on this run was a little over 295mph….in a 1934 Ford roadster.

Like we said. Even the Bonneville legends and veterans look at cars like the 911 with a special perspective.

PRESS PLAY BELOW AND REALIZE YOU REALLY DON’T HAVE STONES LIKE DAVE DAVIDSON!