Mother Of All Australian Burnouts: This 8,000 Horsepower Holden Monaro Enters The Ring! 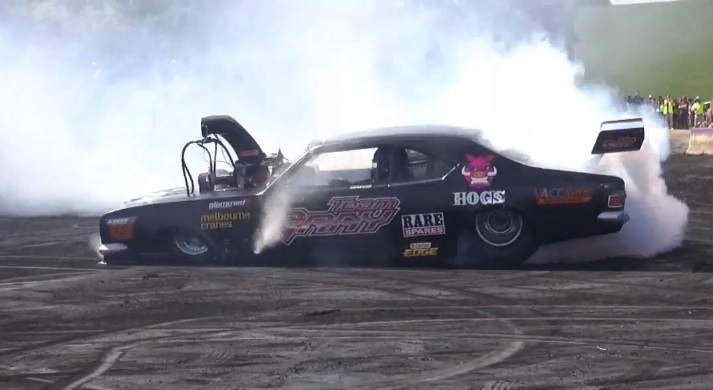 The recipe for a successful Australian burnout car is fairly simple: Take one road vehicle, put in enough power and gearing that the rear tires don’t have a prayer, a fan that works well enough to blow the tire smoke out of the cabin so the driver doesn’t choke on it all, and have fun until something blows up…tires, radiator, engine, whatever works, mate. Many write it off as automotive juvenile delinquency, but it looks like a riot to us and provided we had the means, we’d throw a Paxton onto a mid-90s Mustang Cobra that had a spool out back and wouldn’t come back until we either had a trophy or a shell of a car left.

This Stunning 1940 Ford Is Owned By The Real-Life Little Old Lady Out In California! Check Out The Backstory On This Cool Cruiser! Houston Autorama 2015: Gene Winfield Chops A Top And A Lot More!

5 thoughts on “Mother Of All Australian Burnouts: This 8,000 Horsepower Holden Monaro Enters The Ring!”