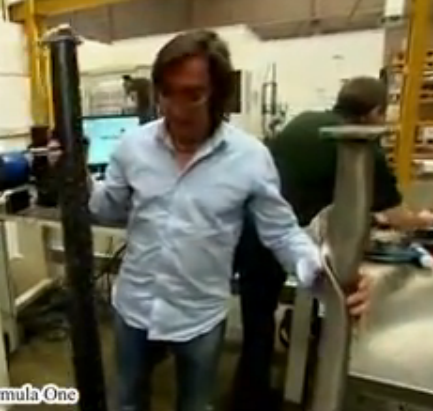 We got tipped off to this video by BangShift reader John Dozeman and we thought it was pretty neat. The footage is a clip from a BBC show about the technology involved with Formula One cars. In this segment, Richard Hammond from Top Gear meets with an engineer from a driver shaft supplier and they go over the basics of  driveshafts and carbon fiber construction. They then bolt a steel shaft and a carbon piece in a testing unit that measures the amount of torque they can withstand before failing and the results are pretty interesting.

The steel shaft looks like a pretty beefy piece and it takes some punishment but the carbon fiber one trumps it by a huge margin. Believe it  or not, there are more and more guys running carbon fiber driveshafts in stuff that isn’t professional level. Serious pro touring cars have been using them along with hard core drag cars. Companies like Dynotech and QA1 offer them and other suppliers for the circle track offer them as well. In every form of racing when strength can be upgraded and weight can be saved, it is a virtual no brainer…if you have the money to pay. The video you’ll see below seems to be a few years old but even then the list the price as 2,200 British pounds which is well over $3,000 now.

As the video proves, even the carbon fiber shafts have their failure point and we do know racers (specifically drag racers) who have turned “unbreakable” carbon fiber driveshafts into dust in heavy cars with lots of power. Some guys could break a steel ball in a rubber room and those are pretty much the dudes we hag out with, but we digress. Press play below to see a carbon fiber driveshaft get tested to the point of death with Richard Hammond providing the narration. This is fun stuff. Destructive testing FTW!

PRESS PLAY BELOW TO SEE TWO DRIVESHAFTS GET TWISTED TO DEATH – STEEL VS CARBON FIBER!

Thinking About Installing A Hydraulic Clutch? Let American Powertrain Show You How To Set Up The Throw Out Bearing In This Video In Torque We Trust: Petrolicious Spends Some Quality Time With A 1967 Plymouth Barracuda Formula S

6 thoughts on “Neat Video: Watch Steel And Carbon Fiber Driveshafts Get Tested To Their Failure Points”