Barn Find Startup: Here’s What Happens When A Car Guy Just Can’t Stop Himself From Getting Something Old Running 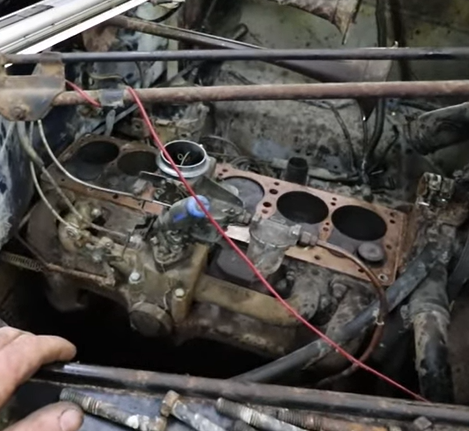 All the “Will It Run” videos that have become so popular lately have spilled over into all kinds of stuff, and they certainly are fun to watch. I’ve been involved in making something run that hadn’t in a jillion years, too many times to count, and sometimes these folks doing it make me laugh because you can just feel them starting to go down a rabbit hole. We love Halfass Kustoms, and Brent is a riot. He’s a dude we’d LOVE to hang out with and thrash on a project with because he is just too much fun and amazingly good at making things happen quick. Nothing phases him, and he isn’t afraid to tackle just about anything on the planet.

The good thing about him is that he knows when something is a bad idea or probably won’t work as well, so he’s usually smart with his time. With that said, he’s also fun enough to recognize when he’s willing to commit a certain amount of time to something even though he knows it isn’t a good use of time, just because it will be fun. We dig that. And that is exactly what is going on in this video.

Someone called him and told him about a 1950 Dodge truck that had been sitting and was going to scrap unless he came to get it. The truck was nearly complete, and looked like it had been parked and ignored for 30 years. Brent said he was going to get it running and then drive it to the parking spot it would have in his field until it was up for being worked on and that he knew there was a chance this thing could be harder to make drive than it seemed just because of all the stuff that was locked up on it due to rust and what have you. Well it got more involved than that and watching him laugh at this one repeatedly while never giving up is a testament to what we car guys will sometimes do to make something run even if it shouldn’t.

Brent my friend you are my dude, I love you for being this guy and hope that never changes. Every once in a while doing something just because is what we should be doing. Keep it up brother.

Holley Carb Tuning Tips And Tricks With Steve "The Carb Whisperer" Brule From Westech Performance! Want A Super Quick And Easy Fire Pit Made Of Wheels? Watch This!