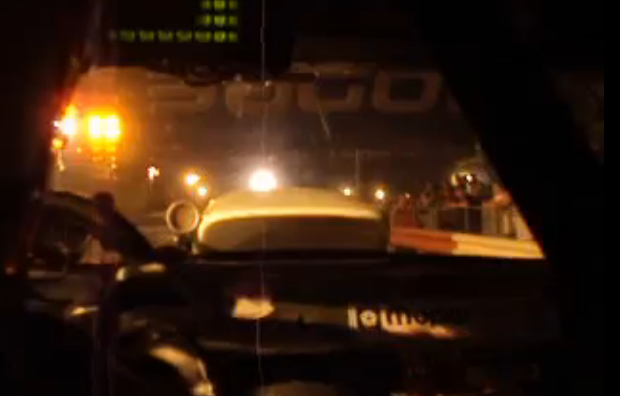 While most people associate the distances of a quarter and eighth mile, the fact remains that there are tracks of all different lengths around the country. 100 foot drags have been held in many places and most recently on the east coast in places like Connecticut and Long Island. There were half mile drags back in the day and there are at least two tracks currently operating at a distance of 330′. That’s right, a 16th of a mile. One of those tracks is the spartanly cool Mountain Motor Dragway in Isom, Kentucky. We actually know a dude who raced there a time or two and he said it is like no other place he has ever been to for several reasons.

There are a couple of in-car videos from the track on the web, taken in this very car but we decided to show you the night lap. Why? Well it gives a good indication of the lighting level at the facility which can be described as limited in the best case scenario. The actual racing surface is pretty well lit but once the drivers enter the shutdown area which is scarcely longer than a football field and change it may as well be a broom closet. Things go from dim to literally pitch black when the driver makes the right hand turn onto the return road at the end of the course. We’re thinking that this race has consumed a steady diet of carrots for years to so deftly navigate the end of the track.

All this being said, we want to race there. The place looks neater than hell for all the right reasons. It is no frills, down home drag racing. We’d just want to do it in a production car with good headlights.

PRESS PLAY BELOW TO MAKE A LAP AT MOTOR MOUNTAIN DRAGWAY AND WATCH A DRIVER NAVIGATE THE MURKY DARKNESS!