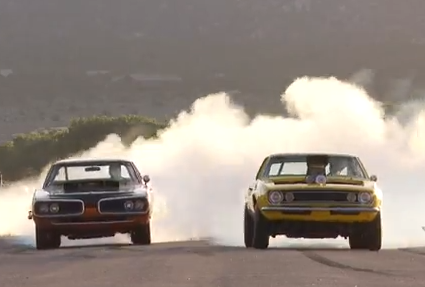 When Finnegan and Freiburger hit the road on a Roadkill adventure we know a couple of things. The first is that an semblance of a schedule is probably going by the wayside before the keys are actually placed in the ignition the first time. The second thing is that the time situation will continue to get worse from there on out. The third thing we know is that they get to drive some awesome stuff and this episode has two of Hot Rod’s most enduring project cars in the form of the Crusher Camaro and DF’s own Super Bee, which is the first car he ever bought as a kid.

The plan in this episode was to cruise the Crusher and the Bee from LA to Salt Lake City and run at the midnight drags event that the strip there in SLC holds. On the plus side, one of the two guys gets to run down the track even though the place was closing and it was 2AM. Along the way to the track they fight testy car issues, high heat, and fuel economy that makes oil companies consult their physicians due to a four hour boner situation. We’re pretty sure that neither car saw a double digit fuel economy number during the entire long journey from LA to SLC and SLC to home. We’re certainly not crying about that but their credit cards were!

It is cool to see these two well known cars out and about. This is another entertaining installment of Roadkill. Tune in….you’ll dig it!

PRESS PLAY BELOW TO WATCH THE LATEST EPISODE OF ROADKILL!