Russian Dash Cam Video: Hilarious Video Of A Tank Driver That Should Have His License Revoked! 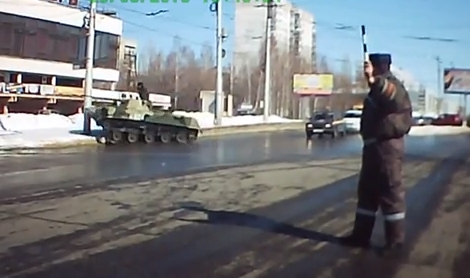 We used the word “tank” in the title but frankly, this thing is not as stout as a tank because if it were, the vehicle would have totally destroyed the pole it crashes into rather than essentially bouncing off of it. In terms of Russian dash cam videos, this one is a topper because it not only provides us with some hilarious footage, it also provides us with a glimpse into the surreal nature of what life must be like in Russia.

Imagine you are the people sitting in your car. You come up to an army looking guy with a little red and white stick in his hand who has managed to halt traffic on what seems to be a pretty major road. Next thing you know these tracked army vehicles that look like tanks start rolling by and the dude in the lead has either been main-lining vodka or he’s received his tank driver’s license from the inside of whatever Russians have for Cracker-Jacks…probably rusted nails with pepper on them. Anyway, that guy manages to drive across like six lanes of traffic and then decides to turn directly into a pole carrying wires! Thankfully the vehicle he is driving bounces off the big pole without ripping anything down. Something tells us the guy driving that day has been “reassigned” to Siberia.

Russian dash cams are like portals into another freaking universe. A universe where the tanks are poorly driven and the vodka flows like wine.

PRESS PLAY BELOW TO SEE THE WORST TANK DRIVER IN RUSSIA CAPTURED ON A DASH CAM!

3 thoughts on “Russian Dash Cam Video: Hilarious Video Of A Tank Driver That Should Have His License Revoked!”